X-Terra (XTT.V) puts boots on the ground nextdoor to 6.4 million AuEq ounce resource in Quebec, plans next stage of exploration at district-scale porphyry target in NB 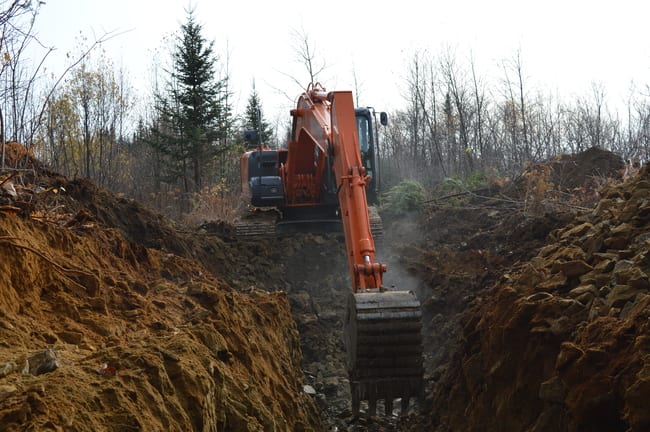 If you were to press X-Terra (XTT.V) management on which of their two main projects bear flagship status, they’d likely point to both with equal measures of enthusiasm.

There has been a lot of recent activity in the vicinity of the company’s wholly-owned 93 square kilometer Troilus East property along the Frotet-Evans greenstone belt in northern Québec.

X-Terra’s property boundary is also less than 2 kilometers from Inmet Mining’s historic open-pit mine which saw production of 2 million ounces of gold and 70,000 tons of copper between 1996 and 2010 (adjoining TLG’s resource, lower southwest corner, above map).

According to TLG’s project page, the Troilus gold-copper deposit exhibits the following characteristics:

The market is developing an appetite

In a recent Equity Guru round-up piece – Guru’s $20M — $80M shortlist of gold and silver ExplorerCos (those with endgame potential) – we marveled at the current climate where high-quality junior exploration plays are concerned.

X-Terra gets busy in Que

On June 12, X-Terra put boots on the ground at Troilus East…

The Frotet Evans Greenstone belt has seen limited exploration when compared to the
Abitibi Greenstone Belt.

With a multi-million oz resource shaping up next door, not to mention significant historic production, X-Terra could be onto something here.

This more than a closeology play. Much more.

“The Troilus East property straddles a structural zone parallel to the Troilus Deposit. For a strike length of about 20 kilometres, highlighted mostly by a mafic volcanic sequence which is interlayered to elongated mafic to ultramafic intrusions. Historical governmental mapping programs have already highlighted a prominent potassic alteration taking the form of biotite. In addition, more than 23 sulfides occurrences were documented during these mapping program which were completed by the provincial government (Sigeom, Énergie et Ressources Naturelles Québec).”

Regarding the Troilus East till sampling program, of the 78 samples extracted, 72 tested positive for gold grains, using both visual cues and the ARTGold recovery technology developed by IOS Geoservices.

Adding an element of intrigue to this till sampling campaign…

The truth machine (drill rig) will have the final say, but this positive correlation between gold grain and source bodes well for a new discovery.

“Additional analysis was carried out over the samples that highlighted scattered platinum group metals grains in the mineral concentrate of the tills, suggesting a possible link with mafic to ultramafic intrusions common in the Troilus East structural corridor.”

For this current phase of exploration, X-Terra has engaged Technominex of Rouyn-Noranda to assist its team where the focus will be systematic prospecting and sampling of predetermined targets on the property.

“The exploration team will fly over the territory using a helicopter to maximize the program efficiency. Manual outcrop stripping and channelling could also be completed depending on the presence of mineralization. Depending on the results received, additional works such as an Induced Polarization survey could be necessary before undertaking additional exploration work, including a first ever diamond drill program.”

Having chatted with CEO Ferreira recently, I learned we could see a drill rig mobilized to the project later this summer. 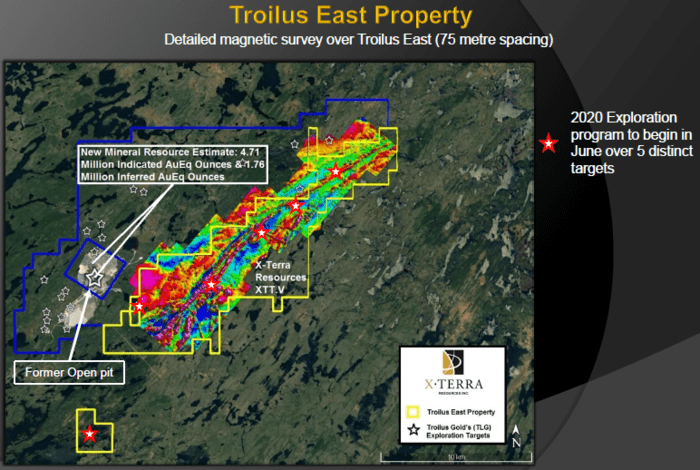 The target at Grog and is a large intrusion related epithermal system.

Management is drawing comparisons to the Appalachian Belt which hosts the Haile gold deposit in South Carolina (approx 4 Moz in resources). 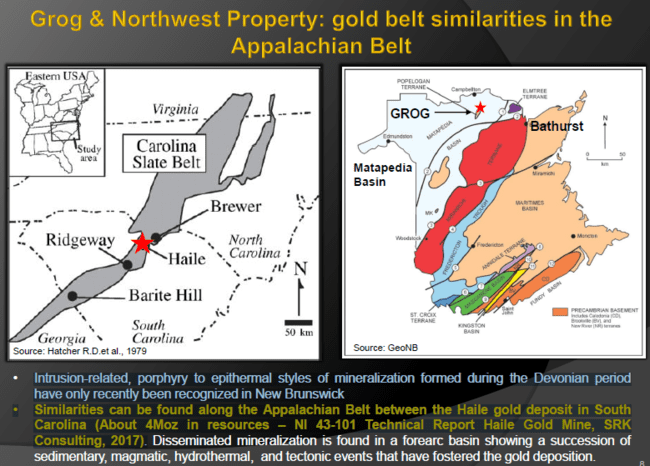 No, the grade isn’t especially fat or sexy, but it’s a broad intercept of mineralization suggesting a (potentially) large mineralized system lurking in the project’s subsurface layers.

It’s important to understand that epithermal systems are often defined by sub-one-gram material. It’s the scale and near-surface nature of the mineralization that moves the needle for these types of deposits. 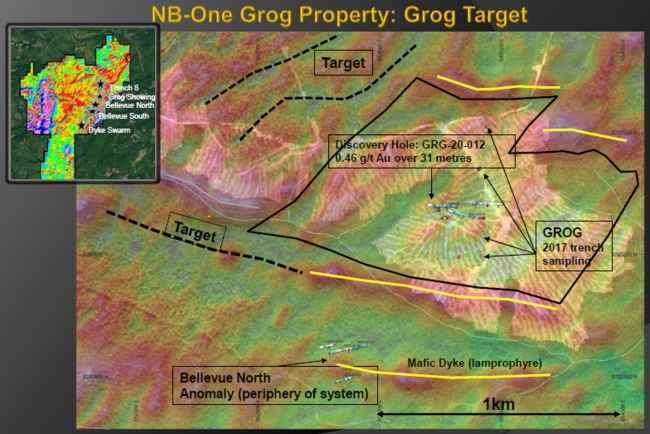 With discovery hole GRG-20-012 and a disciplined approach to exploration—stacking both geophysical (induced polarization – magnetic surveys) and geochemical (surface sampling and trenching) data—the company can vector in on additional mineralization along the Grog target area with much greater confidence.

This new data will also allow the company to refine and generate additional high-priority drill targets across the entire setting.

This is a significant exploration breakthrough on a property that’s never been drilled and reinforces our expectations that a large epithermal system is present. While more in-depth geological work, which includes drilling is needed, X-Terra’s management believes that the 11 holes (1,499 metres drilled) only covered a very small fraction of the targeted environment. Reaching a significant mineralized interval this shallow (from 107 metres to 143 metres, in GRG-20-012) is a milestone we were relentlessly pursuing after completing the limited field exploration programs based predominately on roadside trenching. The information obtained in this program will allow the detailed follow up on the Grog target but also allow X-Terra to refine and generate more high priority targets carrying the same geological characteristics to that of the Grog target. This provides a monumental shift moving forward. 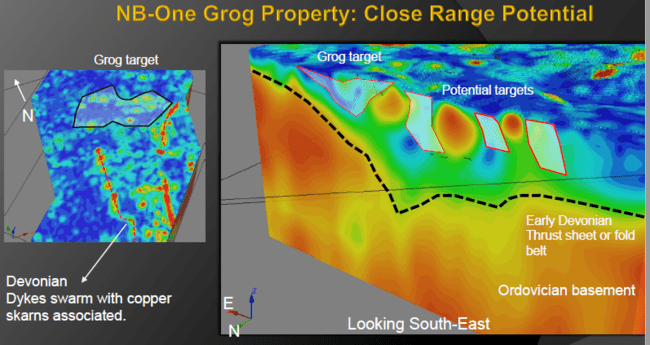 On the Northwest portion of the company’s NB land position, note the high-grade till samples suggesting a network of orogenic veins… 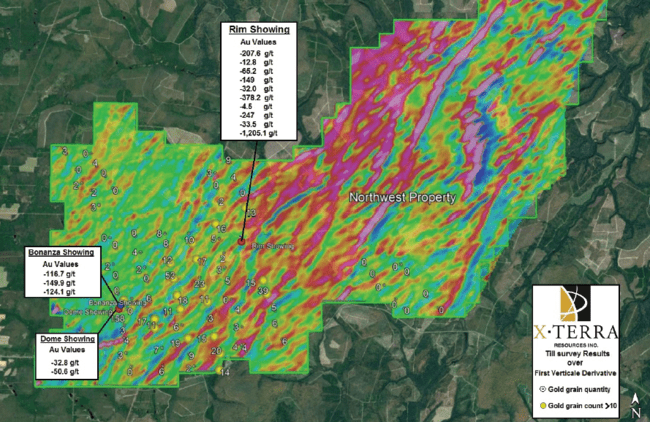 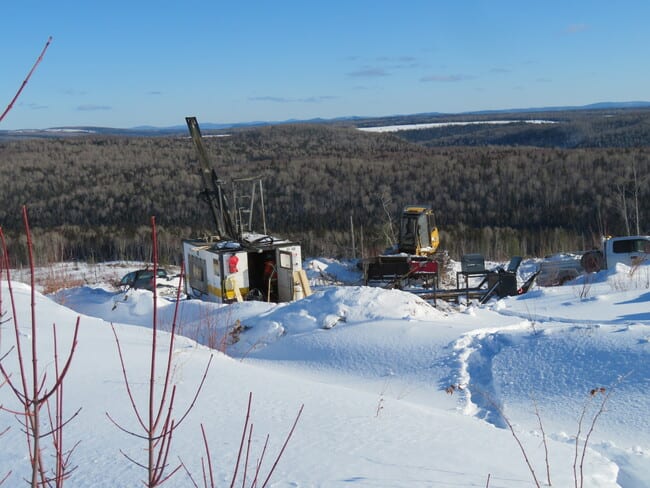 No matter how you size up the results, these are early innings at Northwest.

In a recent news release, the company stated:

X-Terra has put a temporary hold its work programs in New Brunswick due to provincial government response to the recent increase in Covid-19 cases in the Campbellton region zone 5, where the Grog and Northwest projects are located, which has led to significant restrictions on non-essential travel in New Brunswick. X-Terra will be closely monitoring the provincial government efforts in re-opening its inter-provincial borders.

We quoted CEO Ferreira twice in this piece. The following adds a little more depth to the man in charge:

Mr. Ferreira is a successful entrepreneur who has provided strategic vision, planning and implementation for public and private companies for more than 9 years, primarily in the junior mining sector. He has experience in building effective exploration teams and delivering quality exploration results. He has established a deeply rooted network in the mining and finance community which have helped shape several publicly traded exploration companies.

“Mr. Demers brings over 20 years of field geology, geophysical, data analysis, mineralogy (descriptive and applied), geochemistry, and 3D modelling. A graduate from UQAM (Bachelor’s Degree in Geology) in ’96, Martin has succeeded on many fronts, including that of the re-opening of the Casa-Berardi gold mine, the discovery of new zones, which ultimately led to the sale of Aurizon Mines to Hecla Mining in 2013 for $796 million.”

“Mr. Théberge, a graduate from the University of Laval in ‘94 with a Bachelor’s Degree in Geology, served as the mine geologist and chief geologist for both the Wrightbar and Donalda gold mines. He has held many consulting roles along his career, and participated in the discovery of the Moriss showing for Vantex Resources in 2010, and the Wasa Creek showing along the Cadillac Fault in Abitibi.”

With drilling at its highly prospective Troilus East project set to begin in the coming weeks, this play should begin attracting a wider audience. Between Troilus East and Grog, we should see significant newsflow over the balance of the year.