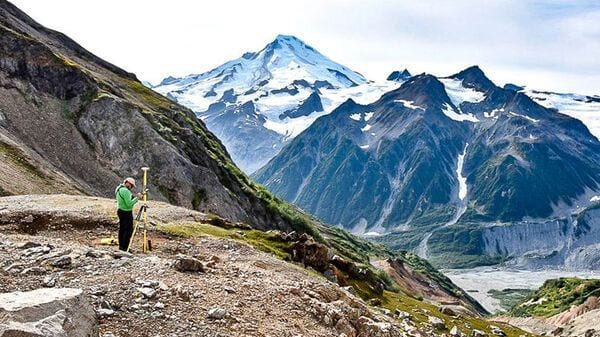 Even though virus-related shutdowns have hindered the pace of mineral exploration in recent weeks—some regions more than others—progress is still being made on multiple fronts. Creating shareholder value is the primary objective of the companies we follow here at Highballerstocks… virus be damned.

Three of the companies on our shortlist dropped headlines last week. Two others ramped up promotion in order to get their story told to a wider audience.

Defense is a stock I singled out early in the going, elevating the company to my top three picks for 2020.

The company’s wholly-owned Wicheeda REE Project located in the mining friendly Prince George region of B.C. is poised for rapid development due to the strategic nature of the deposit.

On April 29, the company closed a PP for nearly $600k, the proceeds of which “will be used for exploration on the Company’s Wicheeda rare earth element (REE) project located in Prince George, British Columbia...”

Defense tabled a modest raise this go round, reluctant to blow out its share structure at current prices. But don’t let the size of the raise fool you—the company has serious plans for 2020. 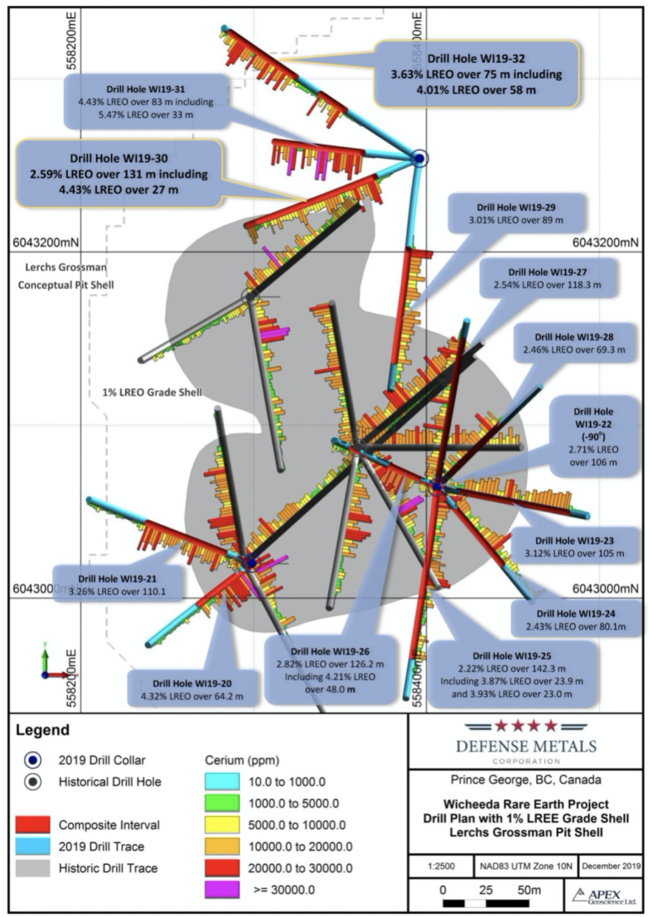 If you haven’t taken a close look at this REE developer/explorer, now might be a good time.

HighGold, a high-grade development play with assets in Alaska and the Timmins camp of Ontario, dropped the following headline the other day:

The company’s Johnson Tract (JT) Deposit is one of the more compelling exploration plays I’ve come across in the junior arena. JT has Tier One potential (a deposit with a mine life in excess of 10 years with at least 500,000 AuEq ounces of annual production). 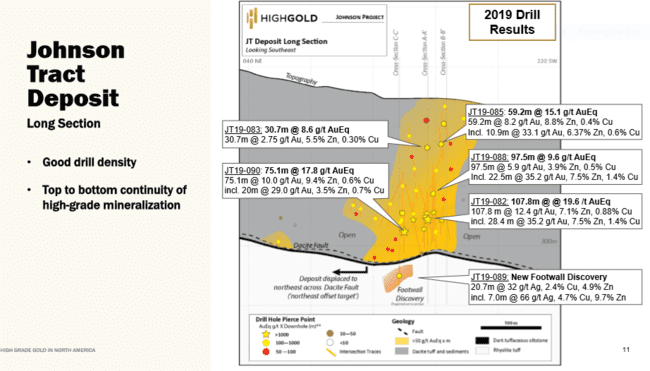 The high-grade resource demonstrated below may be only the tip of the proverbial iceberg. The exploration upside in this under-explored corner of Alaska has to be considered excellent.

I’ll dispense with the usual cautions and notes regarding these resource numbers—they can be perused in the guts of the press release.

If you have any concerns re the friendliness of Alaska as a mining jurisdiction, recent comments by Governor Mike Dunleavy should allay any uncertainties you might harbor:

One of several Mike Dunleavy quotes from the above article…

“We are extremely pleased with the resource estimate which positions the JT Deposit among the highest-grade undeveloped gold projects in North America. In addition to attractive grades and favourable metallurgy, the JT Deposit has several attributes that are attractive for underground development, including excellent width, strong continuity, subvertical geometry, and geotechnically competent mineralization. We view this resource as our starting point and, after laying dormant for 25 years with no exploration until HighGold’s recent 2019 drill program, it provides an excellent springboard for what lies ahead for the Project. The Company’s focus will now turn to further drilling, with the intent of expanding the Johnson Tract Deposit and testing multiple well-developed peripheral targets. With C$11 million in working capital, the Company is fully-funded to carry out its 2020 exploration plans.”

For a deeper delve into this project-rich, well-run junior ExplorerCo, my maiden article from late January 2020 should help satisfy some of your questions: 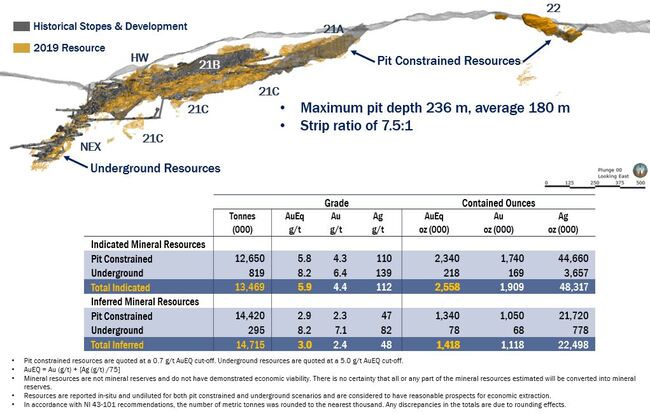 For those who missed the webinar last week, it’s important to give it a listen, especially if you’re looking to shortlist new investment candidates in the junior arena.

Eskay Creek is a VMS type deposit, and Kelly Earle takes us on a virtual tour of the two styles of mineralization present at Eskay Creek—the mudstone horizon and the rhyolite horizon. Kelly offers some interesting details regarding the geology i.e. 70% of the deposit is in clean rhyolite (no deleterious elements such as mercury, arsenic, antimony) and 30% is in mudstone (deleterious elements occur only in ‘hot spot’ patches).

The PEA delivered last November was nothing short of outstanding. Note the after tax NPV and IRR… 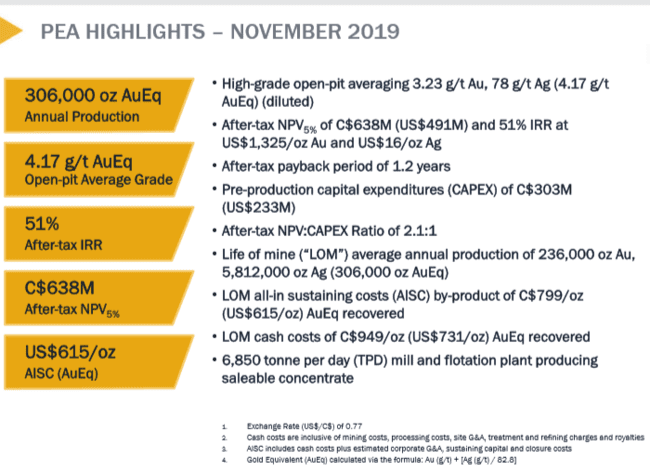 The inputs the company used to generate this robust economic study were conservative—$1,325 gold for example.

The drilling taking place now is infill—the goal is to convert Inferred material into the higher confidence Indicated category.

But the exploration upside at Eskay Creek adds a weighty speculative component to this play. There are several untested zones, particularly at depth, where a recent drill hole tagged a new mudstone horizon outside the current resource: 314.07 AuEq over 2.21 meters. This spectacular hit will be followed up on in due course, once the infill drilling campaign is complete (resource conversion first).

All told, due to the excellent continuity of the mineralization, the company envisions a resource of 5 million ounces at a grade of 5.0 g/t AuEq. An increase in grade—from 4.4 to 5.0 g/t AuEq—would have a dramatic impact on the project’s already robust economics.

More recently, on May 1, the company dropped the following headline:

Skeena Completes Sale of GJ to Newcrest for C$7.5M

Speaking of money, the company is in a very strong position with roughly $45M in its coffers.

ATM (at the money) warrants expiring in June could add a further $5M to the company’s treasury should the shares trade north of $1.00 over the next two months.

Skeena, and its shareholders, are in an enviable position.

There are two companies on our shortlist that didn’t exactly produce news this past week, but ramped up their efforts to get their story out to a wider audience. Both Banyan and Cartier are being featured on BNN Bloomberg throughout the day and evenings on May 2nd & 3rd.

Our maiden article on the company—Banyan Gold (BYN.V) – resource expansion and discovery potential in the Yukon—highlighted the following company fundamentals:

Banyan is exploring two projects in the Yukon—the Hyland Gold Project and the Aurex-McQuesten Property.

The 18,620 hectare Hyland project is located in the Watson Lake Mining District of the southeast Yukon.

The BNN clip airing this weekend…

Cartier is another company I elevated to top-shelf status in my maiden Highballer article, Highballer’s Top Three Picks for 2020.

The company is developing its Chimo Mine Project where the resource currently stands at:

This resource is a moving target as an ongoing, multiple rig, 10,000-meter drilling campaign is testing for mineralized extensions at depth (deposits in this region are known for their depth potential).

On deck is a resource estimate for Chimo’s North and South Gold Corridor’s.

Cartier also boasts a robust project pipeline, one that could create significant shareholder value as the company moves on down the line.

The BNN clip airing this weekend…

Gold has managed to pull itself back up above the $1,700 level in recent sessions.

Poor economic data and geopolitical tension between the U.S. and China—Trump threatened new tariffs against China over the coronavirus crisis—could exert significant upward pressure on the metal in the coming days/weeks.

Technically, if you’re into candles, a bottom my be forming in the pullback that began just over one week ago…

As for the Senior shares, the GDX has broken out to multi-year highs and is currently consolidating those gains:

Note: this article is a May 3rd re-post from Greg Nolan’s Highballerstocks.com.

Full disclosure: Defense Metals is an Equity Guru marketing client. We own shares.