If normal people, rank civilians who know nothing of Vancouver’s penny stock game, understood the financial shenanigans that go on in the name of smallcap investment in this city, they’d be yelling to the authorities to put an end to it once and for all. That they haven’t, and that the Howe Street money churn has gone on for over a century, more or less unbothered by regulators, speaks to just how ingrained it is in Canadian society, and how dependent large parts of that society are on it.

If you look back at newspapers 100 years ago, they’re filled with stories of moustachioed gentlemen raising money so they can go drill for gold in Victoria, or start a mine on the Sunshine Coast, or drill for oil in the wilds of Maple Ridge, or set up a brothel to earn change from the miners themselves, as Donald Trump’s grandfather did in the Yukon. Investors took paddlesteamer tours to Alaska and stock certificates were sold on street corners to reprobate gamblers looking to make it big, and fortunes were made and lost, often at the hands of grifters.

Today, an entire modern industry exists of mining explorer executives, parked cheek by jowl on offices up and down West Hastings and Howe and Pender, and the grift is still afoot. They’ll raise untold millions in the name of drilling new claims, looking for the shiny, but a lot of that money raised for drilling doesn’t actually drill anything. See, if you actually bother the soil with a turning drill, you risk finding out there’s nothing underground, which means the office furniture goes on Craigslist and the girl who answers the phone gets her notice and the directors scarper until the next shell shows up to repeat the routine.

Far better than drilling, the thinking goes, is to raise money endlessly, then complain about the weather, or the price of ore going down, or the permits needing permitting, or there’s another piece of property that might be even better than the last, or the First Nations folks want a meeting, or we’re waiting for the helicopters or the drills to be available, “maybe next quarter…”

A guy can run this routine for years and not get called on it. Which means the guy raising the money for that guy is risking a lot. That person might be cashing in all sorts of favours and helping people they like and respect to buy in because they really believe in the story, and hitting the phones to cold call strangers, and making promises and introductons – only to find themselves ultimately let down by the people they trust at the worst possible time.

Mining executives always complain about the deal guys, but the deal guys get screwed over by the mining guys an awful lot. And sometimes those deal guys decide the only way to be sure things are being handled right going forward is to run the company themselves.

Karim Rayani is a deal guy from way back, a non-stop money raiser, deal maker, handshaker and groover/shaker with a particular penchant for the small deal.

“The small stocks are where you can make the most money,” he explains. “Four cents to five cents? That’s a fat percentage return.”

If you needed a guy to invest in a tiny biotech deal hoping to become huge, Karim would go find him. If you needed some dough to kickstart a palladium mine, Karim will have a guy who knows a guy at the bank. And if you needed someone to write about your company so potential shareholders could find it, he’d be on the phone bothering me several times a day, squeezing me on my rate, selling me a tale that it’s these guys. “My man, these guys, you have to meet them, they don’t have a lot of cash but they have something special…”

Sometimes it would even be special.

But sometimes he’d get screwed over by someone he trusted.

He’s helped some tiny little two-man companies get big along the way, and he’s helped investors make money, but he’s also had his ass handed to him by people who left him carrying the tab.

“The more deals you do,” he says, “the more likely it is you’ll be on the wrong end of a bad one. You can do all the due diligence, but ultimately you have to trust people that they’re going to do what they say, or you can’t get anything done.”

In the back of his head, however, Rayani says he long had a nagging feeling there had to be a better way.

So when he stumbled upon Falcon Gold (FG.V), another tiny two-man mining explorer with a property that isn’t terrible and that had a market cap barely into the 7-digits, he considered raising money for them… But hey, why not just take them over and make sure, this time, things are done the right way?

“Nobody has bought more stock on the open market than me,” Rayani says, who’ll own 18% of the company if warrants and options are exercised. “It’s cheap, so I buy some, and when we need more money, I provide it by buying into a raise. When we say we’re going to drill, we drill. If I’m making the decisions, I can trust the guy in charge.”

He ain’t lying. There are so many green marks on his insider trading chart, it’s like someone attacked my monitor with a paintball gun. 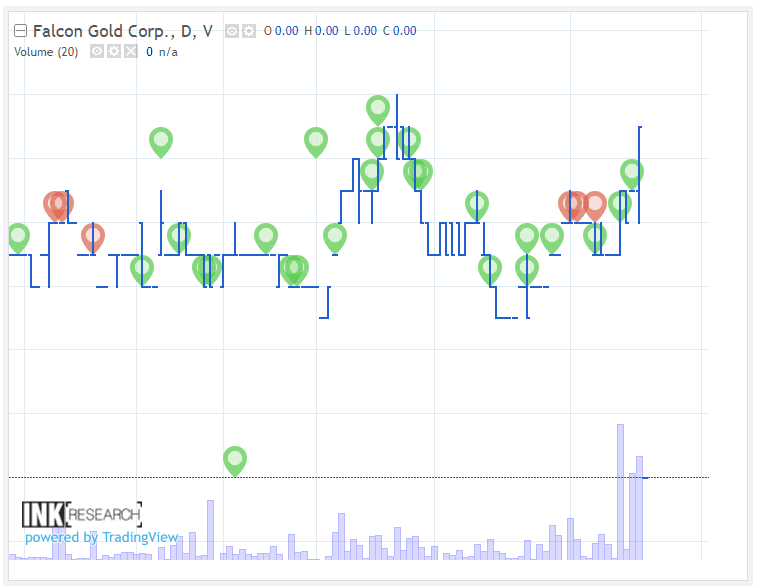 “Investors always say they want management aligned with their interests,” he notes. “Alright then, I’m aligned. And I get more aligned several times a month, if the last year is any indication.”

When that news dropped, Falcon was at $0.035 per share. It’s at $0.055 now. For the uninitiated, that’s a 63% rise. The last three days of trading have seen a big upward shift in buying volume as the story has started to penetrate the minds of investors, with over 12m shares traded out of only 60 million outstanding.

As far as why, this might have something to do with it.

Falcon Gold Corp. has acquired the Spitfire and Sunny Boy claims in south-central British Columbia. The claims are located approximately 16 kilometres east of Merritt and total 502 hectares. The properties are close to excellent infrastructure and access is gained via paved highway and ranch and logging roads.

Rayani has a theory that the sweet spot for explorers is to be the mining equivalent of a pilot fish, which swims underneath a shark, eating barnacles off its belly, even swimming into its mouth to pick food off its teeth. The shark barely notices, but the pilot fish eats well in its shadow.

Rayani’s properties, including the recent pickups, have been worked by bigger fish before, but larger explorers will sometimes abandon a property because ore prices are low, or because they’ve found something interesting elsewhere, or permitting is tough, or it’s a bad time to raise money. That’s where a little nimble pilot fish mining explorer can swim in, take over that property, and use the former owner’s own data to see where the best places to drill might be.

To earn 100% of the Spitfire and Sunny Boy claims mentioned above would cost $125k in Falcon stock, $25k in cash, and a 2% net smelter royalty, should they ever go into production. Somewhere out there, a geologist just earned some beer money. The last property he took an option on came even cheaper.

Falcon’s 2019 due diligence work confirmed the presence of gold mineralization along the Master vein over a 300-metre strike length with samples ranging from 0.33 to 2.74 ounces per ton Au. Recent data compilation of historic exploration work suggests that the best exploration targets on the property are high-grade gold vein deposits along flexures in structure in the northeastern portion of the project. The company is planning tightly spaced soil sampling, EM (electromagnetic) and IP (induced polarization) geophysics, and structural mapping as the best approach for identifying new mineralized structures for both gold and base metals occurrences.

Not to beat the argument to death, but this paragraph right here tells me a lot about Rayani, the mining company President. He could have spent three months sampling the strike, then another 6 months ‘compiling data’, then another quarter of soil sampling, another six months on geophysics, and in that time he may have been able to pay himself a handsome salary and spend all the money raised on SG&A while banging out bullshit filler news releases – then gone back for more money a few times.

Instead, he did most of the DD in secret, and bought the rights to the property cheap with a view to working it NOW. Then he sent drills out to the Central Canada project to see what’s actually under the ground over there. While buying all the stock he could afford.

You know – the stuff every mining explorer SAYS they’ll do… in the next quarter or two.

Falcon isn’t shy about putting out news; in fact, they’e put out five relsases in the last two weeks – not bad for a period where half the world is in quarantine – and they’ve all been legit… hiring drill contractors, starting a drill program, acquiring property, holding an AGM. That’s a business regimen synonymous with ‘getting busy’, not ‘getting promo out’, but the work has been picking up attention from the mining media.

If you want to get into the weeds on the technical side, Greg Nolan has done god’s work there, and I’m not about to bore you by repeating it. Suffice to say, great neighbourhood, big partners, lots of holes drilled before but not as deep as they’d like – so they’re going deeper while they check out the historic veracity of that early drilling. Smart move.

Look, it comes down to this: Rayani wants that money, yo. And the way he’s going to make it is by turning this tiny little mining explorer that might otherwise have been just another of the 2000+ half-cent zombie companies out there into a company that maybe hits a dime.

FULL DISCLOSURE: Falcon Gold is an Equity.Guru marketing client, but boy, you ought to see how hard Rayani worked me on my rates. My kids have to eat, Karim!