Canada more than doubles the Indian subcontinent in terms of land mass, but its population of 37.59 million is a 2.8% sliver of India’s 1.3 billion – that’s 4 people per square kilometre compared to 420. Interestingly, both India and Canada are in the middle of a serious housing crisis that threatens to break the spine of India’s economic miracle and stab at the heart of Canada’s social stability. 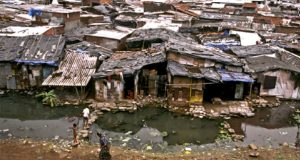 Both countries’ housing shortage woes are rooted in systemic issues involving culture, available resources and logistics, but the land of maple syrup and the world’s largest democracy aren’t alone in their plight. Depending on economic conditions of the respective middle class, these challenges pop up the world over to varying degrees.

The United Nations reported recently that three billion people across the globe will need adequate and affordable housing by 2030, but the growing cost of construction, inadequate materials for harsh environments and superhuman logistics make this goal almost insurmountable. Ingenious start-ups like privately held 3D Sustainable Developments (3DSD) intend to cut this Gordian knot of challenges and solve the global housing crisis by revolutionizing home construction with a 3D printer.

How do you print a home?

This isn’t the little box on your desk that makes Romulan warbird replicas, 3DSD’s patented printer is massive and rides on a gantry. Unlike typical additive manufacturing where building material is extruded and then built layer upon layer, 3DSD’s system utilizes shotcrete sprayed on an air form. This allows the company to build a housing structure in eight hours, that’s right, eight hours. 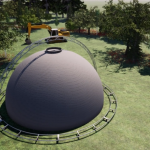 The system looks a little like a Meccano project on steroids and takes about six hours to set up with a three-person team. The technology that went into developing the printer is extensive, but the real beauty of this device is what comes out of the nozzle.

Printing with concrete versus building with wood

Standard concrete needs to cure to a compressive pressure of 2,800 pounds per square inch (PSI) before you can build a house on it – that takes at least seven days if you throw out the arbitrary government standard of 28-day cures. In the end, standard concrete, depending on the recipe, will give you between 3,500 and 5,000 PSI when fully cured.

Concrete becomes high-performance at 7,000 PSI, but 3DSD’s proprietary G-Rock(TM) cures to about 15,000 PSI and can reach the equivalent of 2,800 PSI in just 45 minutes – in some applications it can even cure up to 6,000 PSI in an hour.  This incredibly high compressive strength paired with its impermeability to both water and vapor gives G-Rock(TM) structures thousands of years of durability as compared to modern stick-built (wood frame) houses that have a relatively short economic lifespan of hundreds of years at most, while being susceptible to fires and natural disasters.

During that lifecycle, most homeowners will spend a small fortune heating and cooling their wood-frame abode. HPC structures, on the other hand, are inherently insulative and require 50% less energy to heat/cool.

Now, critics contend the production of standard concrete creates more than 6% of our global carbon emissions and if you tabulate in transportation and the mining for materials, that number jumps to about 13%, making it a dirty substitute to wood.

However, 3DSD’s HPC recipes require 70% less clinker. Clinker is made up of calcium silicates fired in a rotary kiln. These baked nodules are then ground into a powder and used to bind Portland cement.

Speaking of waste, the construction of a 2,000 square foot wood-frame home will generate approximately 8,000 pounds of waste. Since 3D printing is additive manufacturing, there is nearly nothing to take away. No overages, no offcuts, no lumber packaging, just bags of concrete.

For instance, in 1967, tornados ravaged northern Illinois, killing 47 people and leveling 484 homes. All told, the horrific disaster cost the state approximately $50 million, but two concrete structures, a grocery store and high school, which stood in the path of two simultaneous tornados remained standing. The structural repair to the store was less than $200 and there was little structural damage to the school.

HPC is three times as strong as what held those structures together and HPC can be mixed with steel or a variety of fibers to maximize flexibility, making it a perfect material for building in extreme or potentially extreme environments as CEO, Commitment L. Israel explained:

“The performance characteristics of our G-Rock shotcrete allow it to twist with well over 1,000 pounds per square inch of force before its structural integrity is compromised. This, combined with its strength, allows us to focus on regions affected by natural disasters and emerging economies looking to create suitable and affordable housing.”

Just think, from a physical and technological perspective, regions ravaged by natural disasters such as Puerto Rico would be able to reconstruct at a record pace as soon as the political and financial barriers are resolved. The new buildings would give almost immediate shelter to people who desperately need it and when the next storm happens, they will remain intact, ready to move into as soon as the wind and rains abate.

Cleaning up our mess

If helping to solve the global housing crisis isn’t enough, 3DSD has also found a way to utilize and permanently encapsulate novel industrial waste aggregates in their high-performance concrete recipes.

The ground-breaking company can use slag from steel manufacturing, desalinization sludge from treating seawater, mine tailings, broken glass, municipal waste and even Styrofoam. These remediated aggregates can make up almost 60% of the HPC recipe. 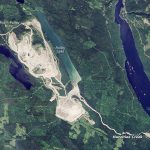 If this can prevent another catastrophe, like the 2014 Mount Polley tailings pond spill which released almost 20,000 tonnes of toxic material into the environment, I’m all for it.

However, if the idea of having this stuff in your walls gives you the heebie jeebies, you’ll be happy to note that some of 3DSD’s HPC mixes were recently tested by federal inspectors and deemed safe as well as outrageously strong. 3DSD is committed to to only producing products that meet the federal government’s stringent guidelines on safety.

Yes, what 3DSD is doing is novel, even compared to other 3D home printing companies, but the techniques and methodologies they use to mix and apply the shotcrete are well within long-established construction industry standards and practices.

And guess what, a multi-millennial-lasting home printed with 3DSD’s patented technology costs a fraction of a traditional wood frame house.

3DSD was incorporated in 2018 as a special purpose corporation in the state of Washington with the mandate: people, planet and profit. The company is vertically integrated with three segments – home construction, concrete production and printer production.

Noah Israel, Commitment’s father, is behind the science that makes 3DSD so unique. Noah is a recognized industry veteran who won the 2010 Cleantech Award for waste remediation and has traveled the globe consulting governments of emerging economies on housing.

Where are they now?

3DSD has already signed its first customer for a locally based four-home development as well as licensing the technology to a Canadian First Nations chief seeking to remedy core housing needs for indigenous peoples from BC to Newfoundland.

The company is also finishing up a quick financing for USD$550,000 in order to fund the construction of a permitted 1,800 square foot, three-bedroom full-size home using their leading-edge 3D printing solution – the first in North America.

Right after closing this round, 3DSD is launching a $7.0 million financing that will inaugurate the first phase of the company’s growth plan which includes the construction of a manufacturing facility capable of producing 10 to 12 machines which would allow 3DSD to tackle large scale development projects. The company will also build a prototype of its new thick-edge slab printer.

With large government MOUs in Ghana and the Philippines, 3DSD not only has the potential to become a major player in the global $24 billion disaster recovery sector, but it also could grab a decent piece of the world’s $5.0 trillion-dollar residential construction industry while its at it.

“The world’s housing crisis is dire, but now with our patented technology, solving that problem is within our grasp. We are looking for investors that align with our mission statement to help us in our current and next funding round. We are getting some great attention and are hoping to close these rounds as soon as possible so we can get on with the good business of putting a roof over the head of those that need it most.”

If you are one of those accredited investors looking for value in the long run and you want to be at the forefront of the next big thing, you’re probably investing in water and keeping your eye on circular economy start-ups, like 3DSD.

Our own Lukas Kane spoke with both Commitment and Noah late last year. This is the resulting podcast. Listen in!