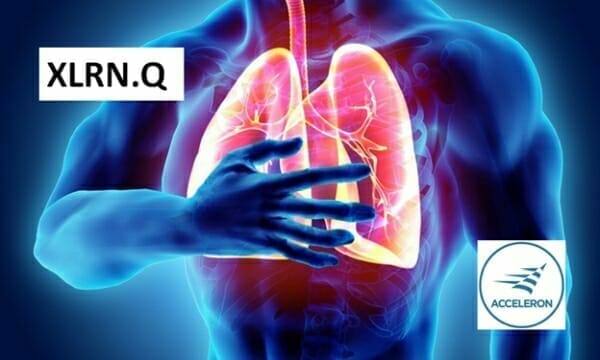 Being diagnosed with Pulmonary Arterial Hypertension (PAH) means that – in five years – there is a 43% chance that you will no longer be alive.

PAH is a relatively rare disorder characterized by the constriction of small pulmonary arteries and elevated blood pressure in the lungs.

Pulmonary arteries carry deoxygenated blood from the right ventricle to the lungs.

PAH results in significant strain on the heart.  A diagnosis usually means that you need to stop exercising and start taking medication which acts by dilating the pulmonary vessels.

The existing medication gives short term relief but does nothing to address PAH’s underlying cause. As a result, PAH sufferers often deteriorate rapidly.

A growing body of research has implicated imbalances in BMP and TGF-beta signaling as a primary driver of PAH.

Acceleron Pharma (XLRN.Q) has been tackling that problem.

After market, on January 27, 2020 Acceleron Pharma (XLRN.Q), announced that the Phase 2 trial of its proprietary drug sotatercept caused a “significant decrease in pulmonary vascular resistance in patients with PAH”.

On Tuesday at market open shares of Acceleron were up 49% to $80, before settling down to $75 by mid-morning, raising the market cap from USD $2.7 billion to $4 billion. 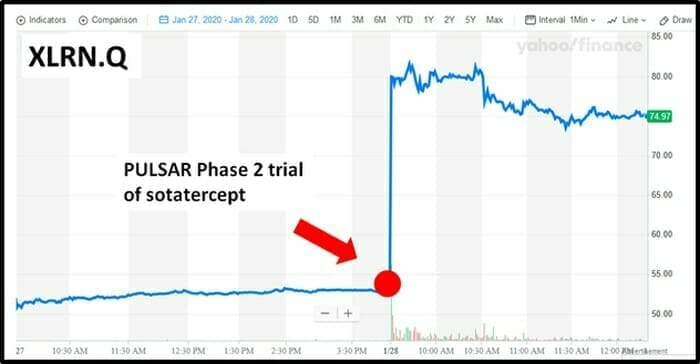 “We’re thrilled to report such positive topline results from the PULSAR trial,” stated Acceleron’s president and CEO, Habib Dable. “PAH is a debilitating disease of high unmet medical need, so we’re encouraged by these data.”

It has a pipeline of products moving towards commercialisation, including a co-promotion with the $152 billion Bristol-Myers Squibb (BMY.NYSE) to create the newly approved REBLOZYL for the treatment of chronic anemia in myelodysplastic syndromes and myelofibrosis.

The company is also developing a treatment for Charcot-Marie-Tooth disease (CMT), a common inherited neurological disorder that affects 1 in 2,500 people in the U.S.

CMT is caused by mutations in genes that affect the normal function of peripheral nerves. It can result in muscle weakness and atrophy in the limbs and a reduced ability to feel heat, cold and pain. 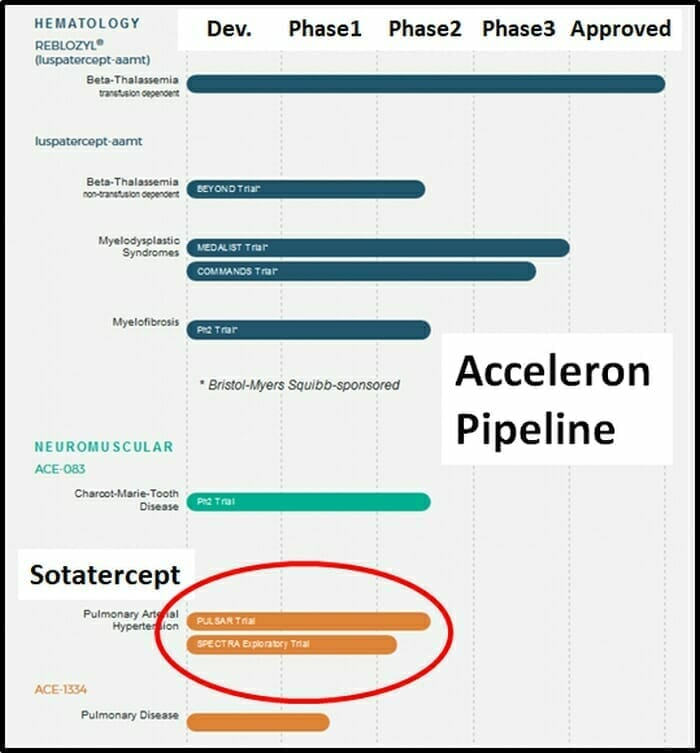 2019 was a rocky year for Acceleron.  Last September it announced that it was discontinuing the development of a drug called ACE-083 to treat a type of muscular dystrophy.

For a biotech company, all drugs-in-development are potential revenue streams.  When the development slate shrinks, in the eyes of many investors that makes the company de-facto less valuable.

Another way of the looking at it is that the company is making a strategic shift – deploying its technical and financial resources where they are most likely to reap a benefit – much like a mining company abandoning a drill program after the metallurgy indicates the mine will be sub-economic.

At any rate, XLRN shares dropped about 10% but then perked up again after the FDA approved another Acceleron drug, luspatercept, to treat patients with beta thalassemia, an inherited blood disorder.

As of yesterday, XLRN share price doubled in the last 3-years. 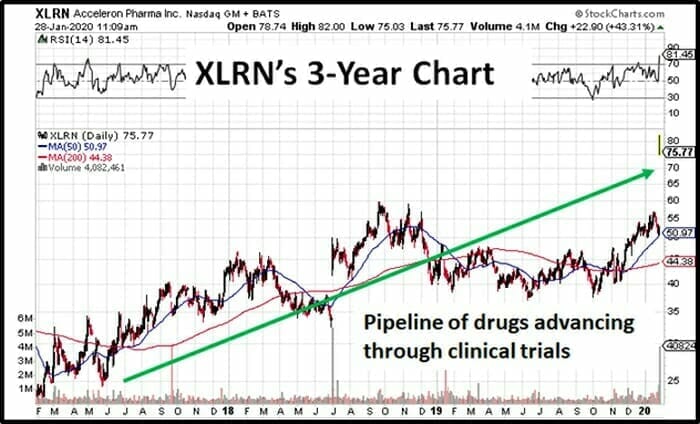 After a six-months, participants in the sotatercept trial showed a significant improvement in pulmonary vascular resistance – a key measure of cardiovascular health, compared with those on a placebo.

Biotech’s biggest ETF, the $7.3 billion iShares Nasdaq Biotechnology ETF (IBB) has been going sideways for half a decade, although it’s up 17% in the last four months.

Within the biotech sector, there are many companies gathering investor momentum.

Today, Leerink analyst Geoffrey Porges raised his XLRN’s price target 100%, from $48 to $104 and maintaining a rating of “Outperform.”

“Sentiment towards the stock is likely to moderate in the next few weeks as the reality of the development cost and timeline in PAH are understood,” wrote Porges, “Nevertheless, XLRN will have switched from being a luspatercept+ investment, to a sotatercept + royalties opportunity, with an entirely different multiple, beta, and investment profile and significant long-term upside.”

Another analyst Yaron Werber also increased his price target on Acceleron, to $109, from $78, maintaining an Outperform rating.