Way way waaaay back, when Equity.Guru was a young pup and the cannabis industry was still being built on fumes of promise, Vivo Cannabis (VIVO.V) – formerly AbCann – was an industry darling.

For a hot minute, anyway. 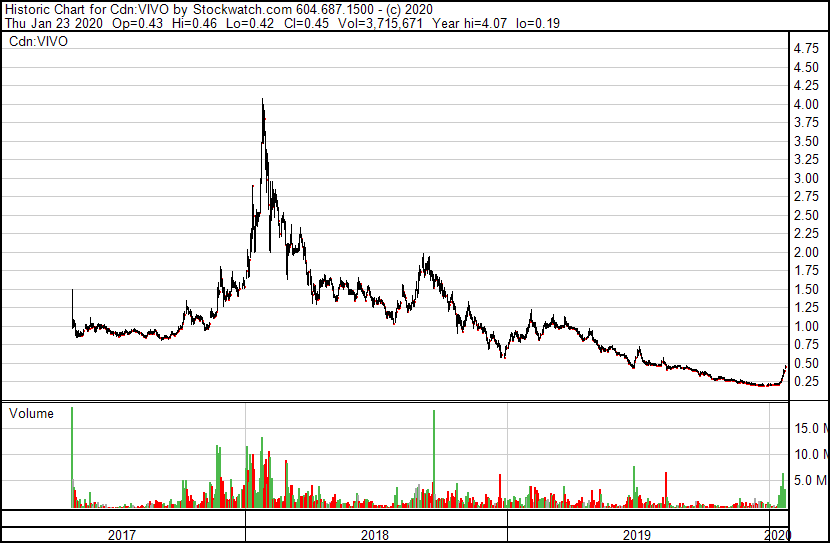 The reasons why Vivo fell off the table and not only grew out of favour, but almost disappeared from our memory banks, are many and varied.

A little too heavy on the early promo? Check.

A little too slow to actually capitalize on their license? Check.

An eventual refusal to talk to the markets in any real way at all? Check.

Mostly, Vivo just fell out of our collective consciousness. The only time I’ve really thought about it over the last several years was whenever some rando social media troll would be looking for evidence that I’m a pump’n dumper, and would have to dig back to 2017 to say, ‘You wrote up Vivo a few times, ZOMG! Such a criminalz!’

But Vivo has not died. Admittedly, it hasn’t thrived, but it’s still out there, kicking along. 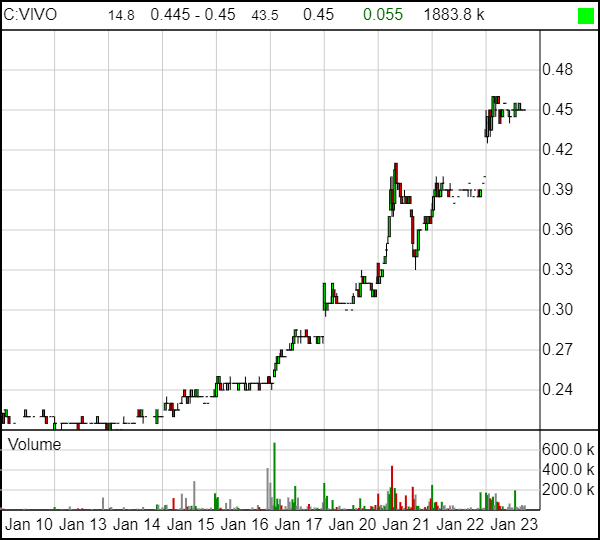 That’s still just a tenth of its high, back in the halcyon days when you could be a billion dollar weed company if you could find a guy with neck tattoos and a hydroponics store gift card who didn’t have a warrant out. Folks who bought into their $3.50 raise back in the day are still rubbing their gaping wounds but, considering how so many companies have been taking it in the neck of late, the Vivo crowd deserve a nod for getting some traction.

That jump isn’t down to random chance. A shift to the TSX big board has given it some life, as well as their launch into cannabis 2.0 products.

NAPANEE, ON – VIVO Cannabis Inc. (TSXV: VIVO, OTCQX: VVCIF) is pleased to announce its common shares will begin trading on the Toronto Stock Exchange effective as of market open on January 24, 2020, under the current trading symbol of VIVO.

Not a terrible thing.

On top of those items, it’s worth remembering Vivo has $50m of cash in the bank, good to carry it for at least the next year, and as of the last financials posted, loses just $2.1 million in adjusted EBITDA per quarter.

I’m not going to suggest to you that this run will maintain, or that all is forgiven for VIVO for losing 95% of its value, but this is a sustained and consistent run, and these are business advancement moves.

Worth paying attention to, maybe.

FULL DISCLOSURE: Vivo is not an Equity.Guru marketing client, but was, like, three years ago, if that means anything to you.