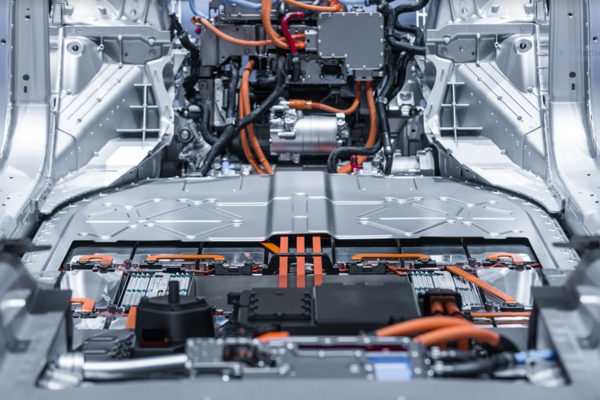 If you’re new to REEs, understand that metallurgy is everything.

In the most basic terms, metallurgy is the science (some prefer the word ‘art’) of extracting valuable metals from their ores and modifying said metals for their intended use.

Rare, but not in the way you think

Rare Earth Element deposits are not rare. What’s rare—exceedingly rare—is discovering an REE deposit with good metallurgy, where the desireable elements are easily separated from the host rock.

In order to break down and make sense of the numbers reported today, know that the company was optimistically targeting a total rare earth oxide (TREO) metallurgical recovery rate of 80%, and a TREO high-grade concentrate of 40%.

These are world-class numbers.

They didn’t just meet the company’s lofty expectations, they exceeded them by a healthy margin.

Translation: Wicheeda’s economics are beginning to take shape with these results, and the numbers look very compelling.

SGS Canada, the lab behind this metallurgical testing phase, stated the following in their executive summary:

“Excellent results were achieved through the flotation process, including a high scale-up ratio, to a high-grade concentrate at high recoveries. The downstream hydrometallurgical process is expected to benefit significantly from this quality of flotation concentrate grade.”

Though these results were produced in a controlled lab and may not be entirely indicative of a full-scale processing scenario, they suggest Wicheeda’s metallurgy ranks among the very best REE deposits in the world.

A 30-tonne bulk sample obtained earlier this year provided the material used in these metallurgical tests.

The balance of this bulk sample will feed a pilot plant the company plans to build together with SGS Canada this coming winter.

The pilot plant will cost roughly $600K—expect a modest PP to be announced as part of the company’s short to medium term newsflow.

Building a pilot plant is a very positive move on Defense’s part.

This is a busy crew, pushing Wicheeda further along the development curve on multiple fronts.

The company will be releasing diamond drill hole assays, in small batches, beginning in early November. 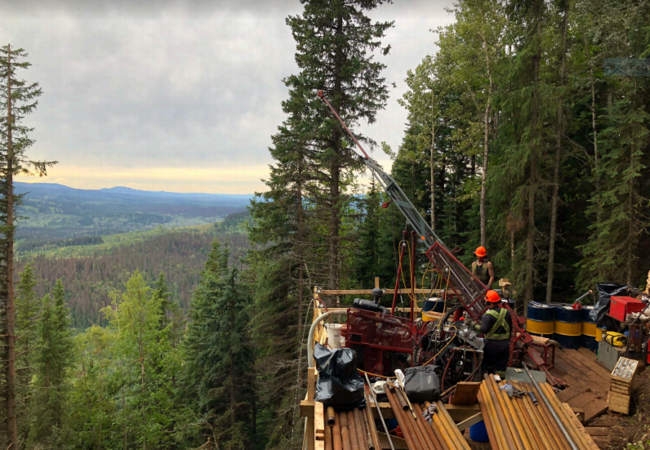 For those new to this play, a total of 13 diamond drill holes totaling 2,005 meters extended the Wicheeda deposit to the north, south, east… and to depth.

All 13 holes from this summer-of-19 campaign tagged significant intercepts of visible REEs.

The final hole of the program produced a 130-meter interval peppered with visible REEs.

Just as significant, this final hole left the deposit open for expansion to the north. 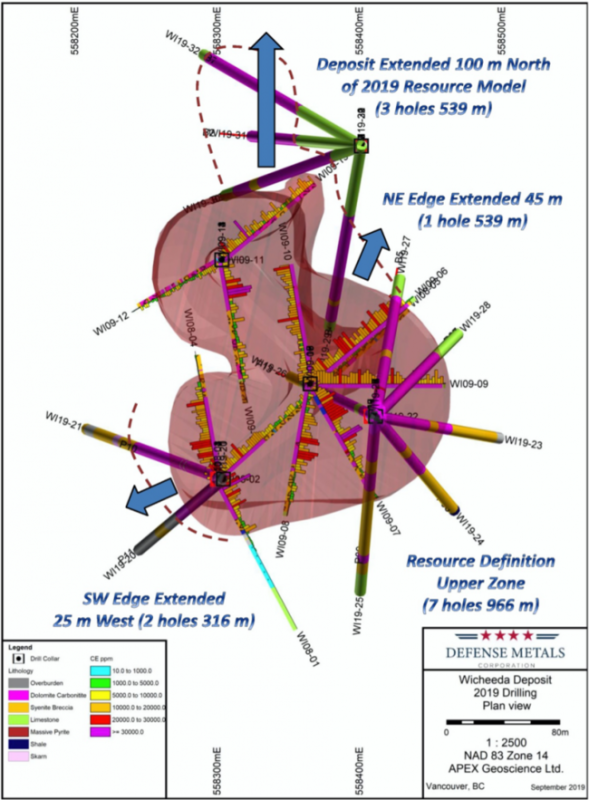 The last time drill hole assays were reported out of Wicheeda it sparked a staking rush in the area. The year was 2010 and nearly a dozen companies were involved.

REEs represent a group of 17 elements that exhibit a range of unique electronic, optical and magnetic properties.

Quoting a recent Guru offering on the subject:

“Their applications are broad-based and oh so very far-reaching in this modern age. Though they’re not dispensed in great quantities, they are an essential ingredient in the production of everything from night vision camera lenses to control rods in nuclear reactors.”

REEs are sometimes referred to as the “vitamins of chemistry”.

Several pounds worth of REEs go into every electric vehicle (EV) that rolls off the production floor today. The stage is set for a steep climb in demand as the electro-mobility supercycle is about to find a whole new gear.

Here’s an interesting wrinkle: China controls approximately 85% of the world’s REE supply. This puts the West in a vulnerable position. 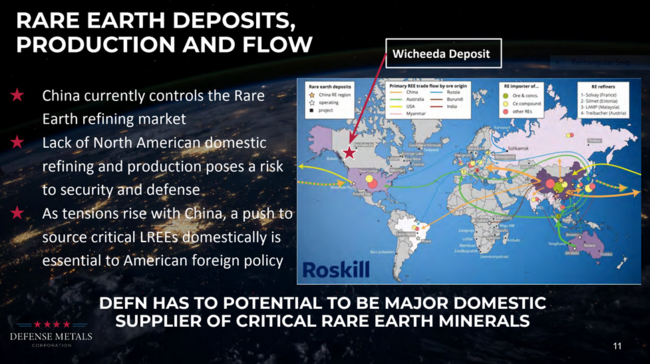 With China dominating REE supply and the possibility of an escalation in trade tensions between the two superpowers, the West needs a stable pipeline of new (domestic) REE discoveries.

This puts Defense and its Wicheeda resource in a very enviable position. The only question is: when will the market catch on?

Wicheeda currently boasts an Inferred Mineral Resource of some 11,370,000 tonnes averaging 1.96% LREE at a cut-off grade of 1.0% (sum of cerium, lanthanum, neodymium and samarium percentages).

A revised, updated 43-101 resource estimate will be trotted out early next year.

Based on the long intervals of mineralization encountered in all 13 holes—some of which were solid stepouts—it wouldn’t be a stretch to expect a big improvement in the above numbers.

Expect to see the majority of these Inferred tonnes upgraded to the (higher confidence) Indicated category, further de-risking the project, setting the stage for further development.

Worth noting is the involvement of Alex W. Knox as a consultant to the company. Based on these extremely positive metallurgical test results, I wouldn’t be surprised if he took on a more permanent role here.

Knox is well known in the REE arena.

Mr. Knox has worked in the exploration and development of carbonatite and REE deposits since 1984, first with Molycorp Inc., at the time the owner of the producing Mountain Pass, California, light REE mine, and later as an independent consultant for various public and private companies and projects throughout North America. Mr. Knox was part of the team that discovered the Kipawa heavy-enriched REE deposit in southwest Quebec, as well as the Ashram light-enriched REE deposit in northern Quebec. He has extensive experience in carbonatite/REE geological environments and has also worked on the Oka carbonatite complex near Montreal and the Prairie Lake carbonatite in northwestern Ontario, among others.

He worked at Mountain Pass, one of the Big Boy comparables used in table 2 further up the page. Without a doubt, Knox knows his (REE) rocks.

These metallurgical test results represent a giant leap forward for the company, further de-risking a deposit that is looking more and more like a mine.

In a region rich with key infrastructure, the company has its sights set on a modest production scenario of two to three thousand tonnes per day to support a rapidly growing REE market. 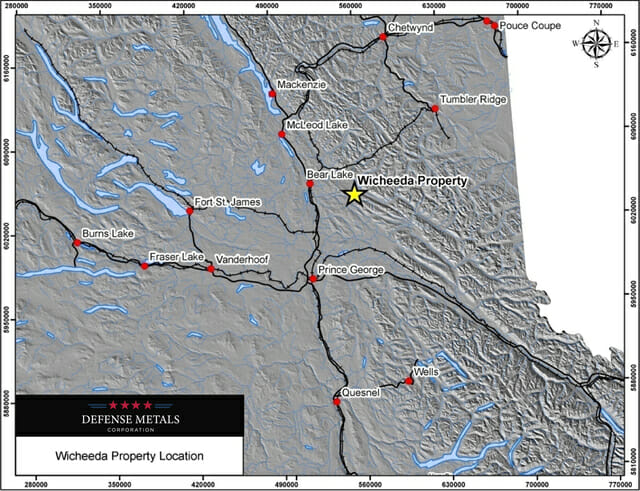 Defense’s valuation, based on its current 30.18 million shares outstanding and sub-dime share price, is a very modest $2.72M.

Current prices could represent a very decent entry point for those looking for REE exposure in their stock portfolios.