Crosspost: RethinkX, the end of beef and how to eat our way out of climate change

RethinkX, a think tank which analyzes industry-disrupting technologies, has published a report about new sources of protein at a time when hamburgers may be costlier than advertised.

Methane from livestock, estimated at 34 times more detrimental than carbon dioxide, is a significant contributing factor to global warming: A single dairy cow produces as much greenhouse gas in a year as a mid-sized car driving 20,000 kilometers, according to the Government of Canada.

Left unchecked, the effects of climate change are expected to shave-off 7% of the global GDP by the year 2100, and the University of Cambridge says wealthier nations are no exception..

“Canada, which some claim will benefit economically from temperature increase, would lose over 13% of its income by 2100. The research shows that keeping to the Paris Agreement limits the losses of both North American nations to under 2% of GDP.”

According to RethinkX, disrupting animal agriculture would reduce the cost of proteins, land use with respect to livestock and drastically cut greenhouse gas emissions.

Beyond Meat’s (BYND.Q) meteoric rise since going public may be an indication the transition to a meat-free world, at least in the West, may be an easier transition than initially anticipated. 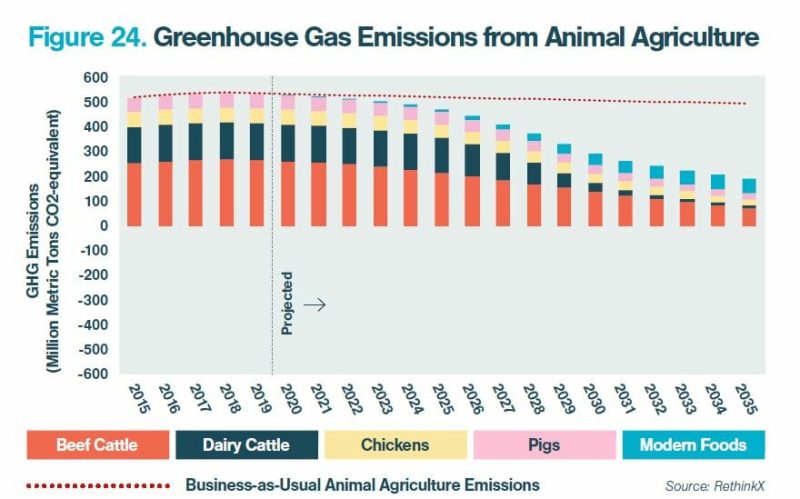 James Vercammen, a professor of agricultural economics at the University of British Columbia, said the movement towards plant-based products is the summation of consumers’ commitment to sustainability which has been years in the making.

“With climate change, people are gradually coming on board and realizing ‘yeah, what can we do?’ And individuals have done lots: Most people try to recycle, people ride their bikes, take transit…it’s the old halo effect,” Vercammen said.

In its ascendancy to plant-based pre-eminence, Beyond Meat has signed distribution partnerships with top-tier food chains including KFC, Subway, Dunkin’ Brands, Blue Apron and Tim Horton’s and sales neared USD$90M in 2018.

But RethinkX says it believes the popularity of companies like BYND is only the start of a rapidly reorganizing food landscape where livestock themselves are far less valuable than the ‘technology’ they contain.

Macro-organisms, like livestock and crops, are a relatively simple source of protein, according to the report. But as populations grow, and as animal agriculture scales up, the effects are harmful to the environment.

That is why the think tank says micro-organisms, things like fungi and bacteria which lie inside an animals digestive tract, are the future of sustainable food production.

“…by moving production to the molecular level, the number of nutrients we can produce is no longer constrained by the plant or animal kingdoms. While nature provides us with millions of unique proteins, for example, we consume just a fraction of these because they are too difficult or too expensive to extract from macro-organisms. In the new system of production, not only do these proteins become instantly accessible.”

Precision fermentation (PF) is one such method for sustainably cultivating proteins. The technology has been used for decades to produce insulin, but the micro-organisms used to created the life-saving drug today could be used to create proteins at-scale tomorrow.

But Vercammen says, although the Beyond Burger is more sustainable than beef, alternative-meat products would need to drastically increase their market penetration overseas in countries like China and South Asia to have a material effect.

“I’m pretty sure it’s not going to have much of a material effect until you have the very large countries starting to internalize [the need for substitutes], and the way that happens of course is through prices,” Vercammen said. 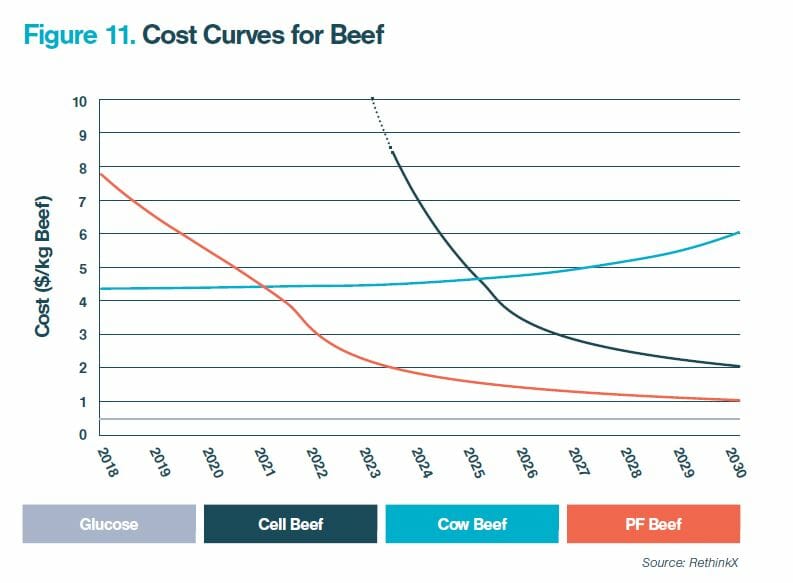 “When meat becomes expensive, then they will look for less expensive substitutes, but meats will only become expensive if governments in meat-producing countries have enough courage to put carbon taxes on them.”

Impossible Foods’ Impossible Burger is created using PF, and RethinkX says the cost of developing proteins this way could soon approach the cost of sugar, but Vercammen says the meat-substitute craze may already be wearing off.

“I remember reading that Tim Hortons had backed away from serving the Beyond Meat sausage. There’s already an indication we might be hitting market saturation because there was so much push from all the big chains at once, and if there’s only so many consumers that can be enticed into this, you quickly reach a saturation point.”

RethinkX’s report states that once protein production through methods like PF and cellular meat become cheaper between 2023 and 2025, “the livestock farming industry will begin to collapse and disruption of all forms of meat production becomes inevitable.”

Firms like Ecovative are already working on product formulations like mushroom burgers which ease the transition between meat and meet-free products by attempting to simulate beef’s texture, a lacking feature in some substitues. 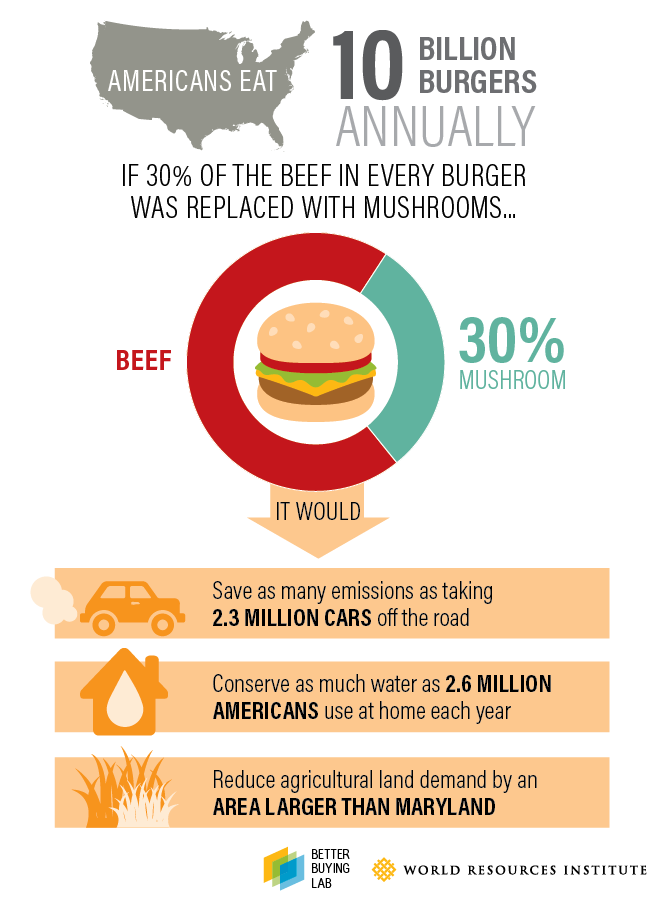 Nikita Alexandrov, CTO of mushroom-tech start-up ThinkMyco, said he believes “microbial food sources are the future,” but added that mushrooms in particular could play a significant role in food cultivation at the local level.

“Mushrooms are the only microbial food sources which local communities can get involved in profitably and don’t have barriers to adoption,” he said.

ThinkMyco is just one of the many companies sprouting up to meet market demand for sustainable meat-alternatives.

A recent survey of Dutch consumers found the top choices for alternatives to meat were mushrooms and tofu in descending order of popularity.

According to the Mushroom Council, one pound of mushrooms requires “only 1.8 gallons of water and 1.0 kilowatt hours of energy, and generates only .7 pounds of CO2 equivalent emissions.”

The Water Footprint Network estimates 460 gallons of water are consumed produced, and a 2012 study by Judith L. Capper found four pounds of greenhouse gases were created for every quarter-pound of beef produced.

Stay tuned to shroomstocks.ca for more mushroom and psychedelic-related content!