Mergers and acquisitions are considered risky business in the nascent marijuana industry, but CLS Holdings (CLSH.U) has targeted the closest thing to a sure bet.

On Tuesday, CLS announced that one of its primary acquisition targets – a company by the name of “In Good Health” – has received final approvals from the state of Massachusetts to begin processing and dispensing recreational cannabis.

It should be noted that CLS didn’t take credit for In Good Health’s lofty target as the company has yet to formalize its purchase. The deal will be finalized in January 2020, at which point In Good Health will be incorporated into CLS’ vertically-integrated business strategy. 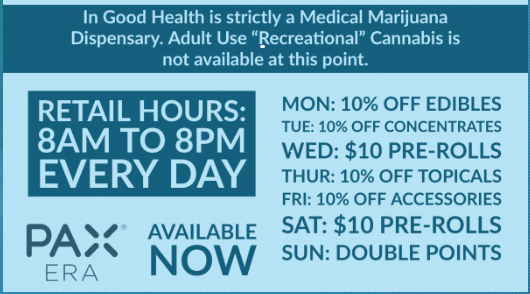 Yeah, this is going to need updating soon. | Source: In Good Health

The recreational-use license was announced by CLS early Tuesday via press release. As a result of the approval, In Good Health becomes one of around 30 dispensaries in the state to offer both THC- and CBD-based cannabis products for recreational consumers. A grand opening event is planned in the coming weeks.

“To be among the first medical dispensaries in the state to navigate the rigorous gauntlet of regulatory oversight to obtain recreational or “adult use” status is a major accomplishment, especially in light of some of the growing pains experienced in the state as they add recreational cannabis sales to the existing medical only cannabis industry.”

Binder said he expects only 27 recreational cannabis retail licenses will be granted in the near term by Massachusetts’ Cannabis Control Commission (CCC). In Good Health is clearly in very good standing with the CCC.

If you haven’t heard of In Good Health, you’re not alone. In a strange turn of events, much of the innovation in the marijuana industry is happening north of the border (thank you, Jeff Sessions, and don’t let the door hit you on the way out). Unless you have your ear to the ground, marijuana dispensaries in the states have appeared far less exciting. (And what’s more exciting that a marijuana bubble here in Canada?)

By all available metrics, In Good Health is a massive revenue opportunity. CLS knows a thing or two about growing revenues, having already become a million-dollar-a-month cannabis company.

Launched in September 2015, In Good Health operates a large medical cannabis dispensary business in Massachusetts. “Large” is one way to put it.

At last check, the company had over 25,000 registered patients, 2,800 monthly patients and 18,000 square feet of grow capacity. All that space produces an estimated USD$9,000 pounds of finished flower every year. Assuming a retail price of $7,000 a pound, In Good Health is capable of generating $60 million in annual revenue and $35 million in gross profit.

That’s one way of scaling a company. Another way is building a paper empire and getting outed by Chris Parry.

The acquisition of In Good Health is looking like a good move for CLS, which is building out its strategy of becoming a multi-state-operator in the regulated cannabis market. Once the acquisition is finalized, In Good Health will join CLS’ Nevada operations, which includes several brands such as Oasis dispensary and City Trees’ line of THC/CBD products.

Shares of CLS Holdings popped on Tuesday, climbing as much as 12%. Before you get too excited, remember that CLSH.U averages a paltry 109,085 shares per day. By comparison, Canopy Growth (WEED) averages more than 1.85 million per day.

In other words, CLSH.U has liquidity constraints, which is nothing new for marijuana plays. The stock is down half from its January peak and is trading at a tiny fraction of its 52-week high ($1.20).

At current values, CLSH.U has a total market capitalization of just over $31 million.

Is CLS undervalued? Probably. Does that mean it’s poised for an imminent rebound? No. There’s a lot more to marijuana-stock pricing than what the actual company is doing. The industry is in a bear market right now, so there are no guarantees that good fundamentals will translate into a higher share value.

If you’re a long-term investor, though, there’s lots to like about CLS.