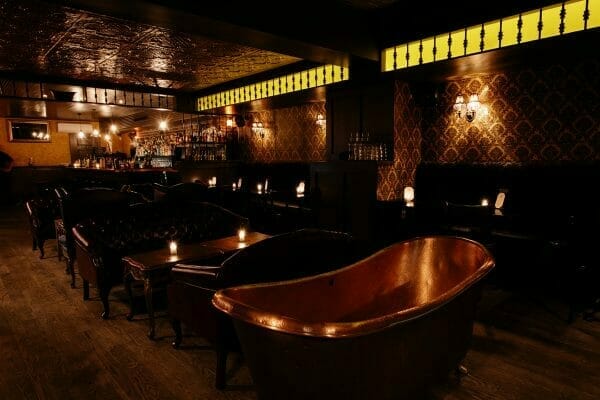 1933 Industries (TGIF.C) vapes are safe and free of pollutants

In the alcohol prohibition days producers would hatch some shady schemes to fill supply.

One of these was distilling homemade alcohol and gin was the drink most commonly associated with the age. It usually involved mixing cheap grain alcohol and other agents like juniper berry juice and glycerin, and then topping it off with water from a sink. If you wanted more than one serving then scale that to a bathtub tap, and that’s how bathtub gin got its name.

The conditions under which this alcohol was created were often terrible, and the distillation percentages made them border more on solvents in many cases than actual drinkable alcohol. Five people died altogether, but hundreds got sick.

Today, with e-cigarettes, the amount of hospitalizations has exceeded 450 and the death toll has climbed to five. And quite a few of these are from vapes augmented to use THC, and many of these recorded hospitalizations are from states where cannabis prohibition is going strong.

The first reports came out of the prohibition state of Wisconsin, which has 35 cases, and Kings County, CA, which has banned legal access to tested cannabis, alongside 60% of local cities and counties. California has 67 potential cases and one death (all illicit market-related). Illinois has 52. New York reports 64 cases. Texas has 25 confirmed cases. On Monday, Kansas reported one suspected death. Minnesota has 28 cases. In contrast, Oregon has one suspected death and one suspected illness. Colorado has four suspected cases. On Wednesday, the state of Washington announced its first suspected illness.

For states that haven’t ended prohibition there’s only the unregulated black market with its shady operators, who have proven themselves either inept or callous or both, and completely willing to produce harmful products to make a buck.

In states where cannabis prohibition has ended—like California, Washington and Oregon—regulators have told stores to post vape warnings and hold suspicious products, and told licensed cart markers to immediately admit any undisclosed agents. There’s a legal market in place where prohibition has ended, and a place for folks looking to vape safely to move.

All our branded THC and CBD vape products do not contain vitamin E acetate, vegetable glycerin, or propylene glycol. All our products are made with ingredients that are known to be safe for consumers. All packaging contains our product ingredients, which are also listed on our website. Each and every product is third-party lab tested, and the results can be tracked via a QR code.

1933 is a legal, accountable company, operating within regulatory standards set by government bodies. And their products are perfectly safe. They operate in California and Nevada.

Tocopheryl acetate, also known as vitamin E acetate, is a common vitamin supplement with the molecular formula C₃₁H₅₂O₃. It’s a derivative of acetic acid and tocopherol, and often used in dermatological products such as skin creams because of its antioxidant properties. It’s fat-soluble, which means that as a vitamin, you take during a meal as an accompaniment with some healthy fats like guacamole, and it’ll help prevent cell damage.

It’s a healthy vitamin and necessary to maintain good health when taken orally and digested with food. But its an oil, and vaporizes at high temperatures. When taken into the lungs as a vapor and allowed to cool, it leaves an oily residue on the inside of the lung, which is what’s called lipoid (or lipid) pneumonia. It’s bad news.

The FDA is now looking at vitamin E oil as the culprit after New York health authorities have confirmed the presence of Vitamin E oil in most seized vape carts in the state. Pen makers use it because it’s a cheap thickener.

The FDA has received about 120 samples for testing, and so far they’ve found vitamin E acetate in 10 of the 18 THC samples. The FDA is testing carts for THC, nicotine, cutting agents called diluents, additives, pesticides, opioids, poisons and toxins. One New York patient who tested his cart found formaldehyde, pesticides, and vitamin E oil.

Health officials have confirmed the following brands as tainted: Chronic Carts, Dank Vapes and West Coast Carts, but the condition has been linked to multiple illicit market brands across multiple states. 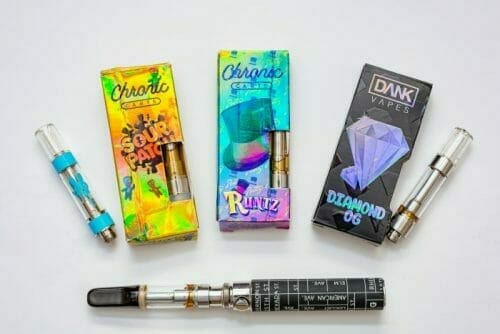 Two of the black-market THC concentrates believed to be causing respiratory illnesses in N.Y. | Source: NYSDH

No wonder people have been getting sick.

Anyone who has vaped from a black market cart recently and developed shortness of breath, dizziness, nausea, weakness, and tiredness should see a doctor, and bring the cart.

What’s truly interesting about this case is that it’s not the first time.

Last year, there was a case report in which a young woman was admitted to the hospital with acute lipoid pneumonia from vaping e-cigarettes, indicating that this has a precedent that otherwise was not reported to the media or authorities.

Yesterday, a small army of U.S. senators got on the cases of online secondhand retailers Craigslist, eBay and Alibaba for allowing the sale of black market vapes on their sites.

Some of these listings appeared to be authentic brand name products, like Juul pods, while others were counterfeit. These items violate eBay’s policies, and while the company has been taking steps to remove these products from their listings, it’s still easy to purchase tobacco products and e-cigarettes on these platforms.

“In allowing these products to secure a foothold on your marketplace, you are not only supporting these companies in their endeavor to increase youth demand and access, but also assisting profiteering counterfeiters seeking to cause teens further harm. Regardless, all of these products – real or counterfeit – are dangerous and shouldn’t be available on your platform,” the senators wrote.

The senators are investigating these companies to determine their tobacco policies, and also to find out how they intend to keep vape products and e-cigarettes off their platforms. The companies have until October to respond.