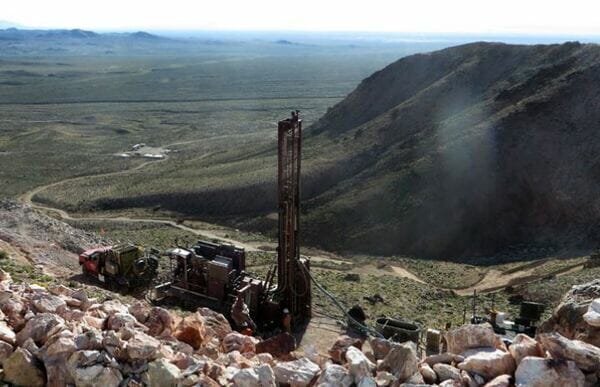 After launching an impressive assault on multi-year highs, gold is taking a well deserved breather.

After launching similarly impressive assaults on higher ground, the GDX and GDXJ are taking a breather right alongside the metal.

Note how the GDX advance was repelled right at the 2016 high (above chart). That was no coincidence. That particular elevational high is a good example of what technical analysis (TA) aficionados call “big-ass resistance.”

This pause, or correction, or ‘period of consolidation’—whatever it amounts to in the days and weeks ahead—is necessary, and healthy.

Let’s face it: after a run of several hundred dollars (from its October 2018 low), gold has become a crowded trade.

Sentiment, as revealed in a recent Commitments of Traders report shows Large Speculators—those shoot-from-the-hip types we need to be especially wary of—far too bullish for their own good. 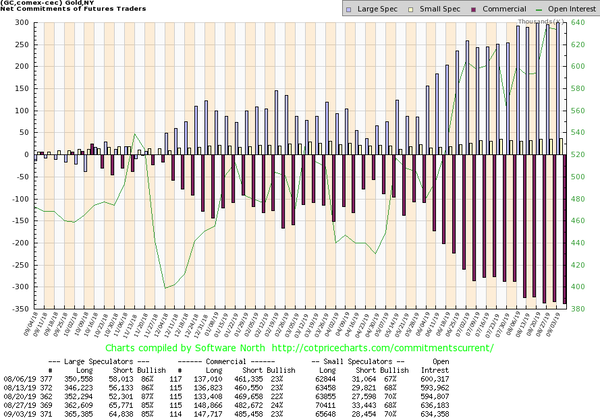 As well, there are a host of momentum indicators on the daily charts that are beginning to show what’s called ‘negative divergences‘ which often occur when a rally loses steam.

Once again, this is normal market behavior. These periods of consolidation are necessary… and healthy.

Once some of the more reckless, rowdy and overadventureous trading animals fall by the wayside, the rally can continue.

A correction back to the $1,400 to $1450 level, especially in light of the frenzied trading among the Large Spec’s noted above, would NOT be unusual. It’s only a matter of time—days, weeks, months at most—before gold reasserts itself and tests significantly higher ground (this author’s humble opinion).

This first run was different

Junior exploration companies—the ExplorerCos—with the exception of a few high profile names, were left out of this recent rally. I was surprised.

The gold run that began in early 2016 was a powerful tide that took everything with it: the GDX, the GDXJ, and the vast majority of high-quality ExplorerCos, many of which tacked on multi-bagger gains.

In early January of 2016 I was pounding the desk on ExplorerCos like Nighthawk Gold (NHK.V), and small producers like Richmont Mines.

Nighthawk, which could be purchased for one thin dime during that period, surged to more than $1.00 per share.

Richmont Mines, which I discovered in late 2015 in the $1.50 range, was taken over by Alamos Gold (AGI.T) at $14.20 per share in late 2017. Righteous bucks for those willing to stand by their convictions (I entered a high stakes trading bet with a popular mining pundit with that Richmont call back in the spring of 2016).

I see a similar opportunity for high-quality ExplorerCos right around the corner—after gold consolidates its recent gains and resumes its push towards historic highs.

ExplorerCos that are in the process of drilling off high-quality assets, like Barrian Mining (BARI.V) and its Bolo Project, may have timed this latest run in the metal perfectly.

In case you’re new to Barrian, Bolo’s 3,332-acres are located in THE very best mining jurisdiction on the planet—Nevada.

We’ve talked about Barrian at length here over the past few months.

A quick summary of the compay’s more compelling fundamentals:

Barrian is a new company. It has an interesting history and an exceptionally strong management team.

Greater insights into the company can be gleaned via the following Guru offerings:

Barrian Mining (BARI.V) about to get busy with the drill bit in Nevada, confirms permits and water rights

We really like what we see here and now our convictions are being put to the ultimate test. 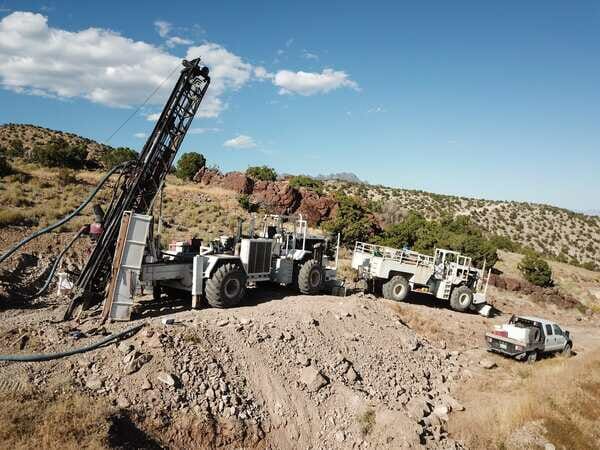 There are a number of ways a management team can create shareholder value in this arena, but none is more exciting than watching a drill rig mobilized in the direction of a high-priorty gold target.

The program will comprise approximately 1,800 metyers of reverse circulation (RC) drilling primarily targeting additional mineralization at the South Mine Fault Zone (SMFZ). Drill holes are also planned for Uncle Sam and for untested geophysical anomalies between the SMFZ and Northern Extension Zone.

Historic drilling at Bolo was limited in its scope due to budgetary constraints.

The best hole drilled to date on the property (DH-BL-38 which tagged an impressive 133 meters of 1.28 g/t gold from surface) ended in mineralization. The previous team SHOULD HAVE drilled deeper but they lacked sufficient funds.

With this current RC drilling campaign management intends to test the depth potential of that mineralized zone by up to 300 meters. They’ll go even deeper if the new geophysical target plays out according to expectations.

If the company is successful in tagging similar grades at those depths, Barrian could light up the whole junior arena.

The recently completed Induced Polarization (IP) and Resistivity geophysical survey at Bolo defined a significant linear conductivity high anomaly coincident with the Mine Fault Trend and with known Carlin-type gold (+ silver) mineralization at the SMFZ. The geophysical inversions indicate good vertical continuity of conductive anomalies ranging between 250 and 400 meters depth, below the limit of previous drilling. The planned drill holes at the SMFZ primarily target the down-dip extension of previously defined mineralization, coincident with the conductive anomaly (image below). Step-down drill holes are planned to increase the vertical extent of drilling at the SMFZ by up to 100 metres down-dip.

The press release goes on to say that additional drill holes are planned along strike between the SMFZ and Northern Extension Zone where historical drilling failed to adequately probe the newly defined anomaly. 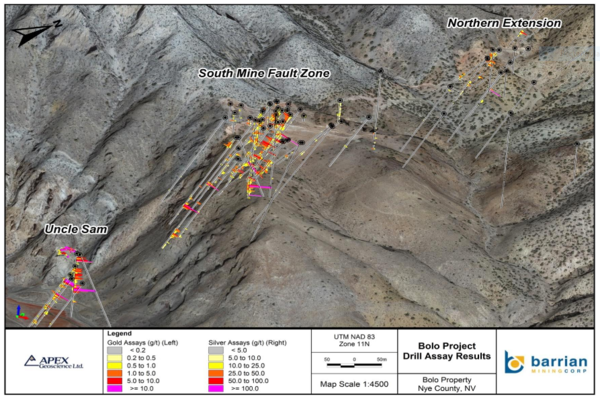 Beyond the obvious targets at depth, it’s all about connecting the dots…

At Uncle Sam, the drill plan is designed to extend the footprint of gold and silver mineralization north along strike and down-dip of historical high-grade surface channel samples.

Bradley Telfer, Director, Co-Founder, and son of one Ian Telfer:

“The start of our first drill program at Bolo marks a significant achievement for our new company and our ability to progress at a rapid pace with drilling underway in less than four months from listing. This program aims to create value through the drill bit by demonstrating the considerable potential for identifying additional gold and silver mineralization both within the known zones and by testing new targets.”

The company is drilling roughly 100 meters per day. They should wrap up this program in less than two weeks.

The lab in Reno is only four hours away by truck. Turnaround time at this particular lab is roughly 18 days.

It’s possible we’ll see our first set of assays by the end of September or early October.

I’d be remiss in not reminding readers that the company also has an earn-in option to acquire 100% of the “Sleeper Project” located in the historic Mogollon epithermal silver-gold mining district of New Mexico. 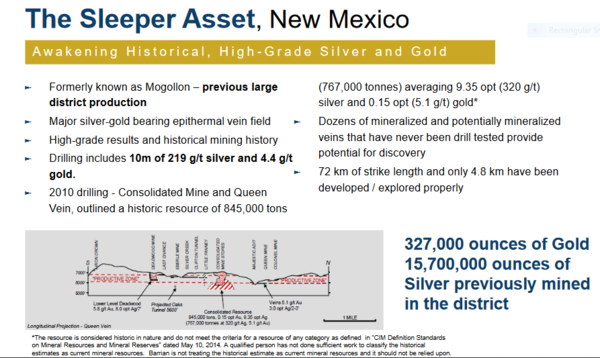 As noted above, Barrian is a new player in the junior exploration arena.

The company has a current market cap of roughly $8M based on its 43.67M shares outstanding.

While most ExplorerCos have been sucking wind of late, Barrian has gained an audience in recent sessions…

… and for good reason

If the company succeeds in tagging mineralization at depth in these first few holes, the company’s audience should broaden, and current shareholders should be rewarded.

Wait a tick… this just in

We were just talking about creating shareholder value—this new acquisition in the vicinity of Bolo has accomplished just that.

The terms of the transaction appear very favorable, requiring only a modest outlay of cash and stock to secure the project.

The Troy Gold-Silver Project has seen limited modern exploration effort, and was a former small producer. Gold mineralization was first identified at the project in 1867 and small-scale mining commenced in 1869. The most recent mining took place from 1948 to 1950 where 643 ounces of gold and 660 ounces of silver were reportedly produced from 1,859 tons of mineralized rock, at an average grade of 11.83 g/t gold (0.345 oz/t Au) and 12 g/t silver (0.355 oz/t Ag).

Though the land package is modest in size—some 158.86 hectares—there are indications of high-grade Au and Ag…

CEO Sali on this surprise acquisition:

“The acquisition of the early-stage Troy Canyon Project will provide synergies with our nearby, flagship Bolo Project. Historical sampling at Troy has returned some very high-grade gold and silver values. The main occurrence remains open on-strike over 300 meters and remains open at depth to over 180 meters. The Project will be the subject of new exploration methods to expand existing and discover new zones of mineralization. We are very excited with the progress being made at Bolo, drilling continues and we anticipate favourable results that will prove-up our flagship asset. Barrian’s primary focus remains on the Bolo project.” 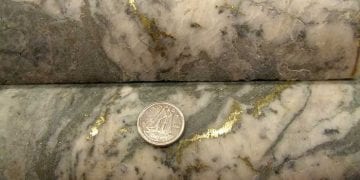 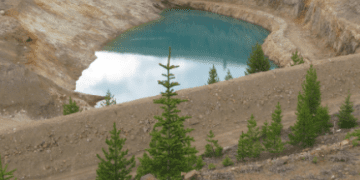