E-sports is starting to run, but let’s use some common sense here

Over the last few days, as cannabis took another face plant into the toilet bowl, a ton of money has been looking for somewhere else to go.

That should have been great news for the resource sector, though they haven’t yet figured out how to get cannabis investors interested in what they do.

And it should have been great news for blockchain, but nobody’s butt has stopped hurting from the last time we played that party game.

So with a load of millennials all up in cash, the e-sports market, which has been looming for many months now, finally broke the dam. 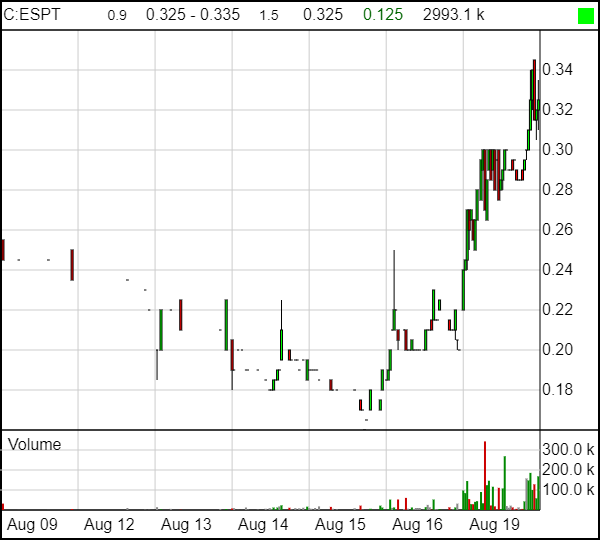 When your ticker symbol is ESPT, chances are good you’re going to pick up the ‘don’t make me read stuff, just take my money’ crowd, in the same way early 2013 cannabis investors jumped into Satori Resources because it had the ticker symbol BUD.

UGM Gaming (ESPT.C) was the chosen recipient of an entire sector’s grace yesterday, ripping 60% and helping cannabis kids who’d seen too much red the last few weeks get through a day without worrying about their college fund.

Don’t get me wrong: UGM is fine. It’s cheap ($14m market cap now), perhaps not relative to its revenues, but certainly to where others are entering the sector. And it does some actual business, mostly in the one-off event space. And it has some influencers working alongside it, though not in an exclusive way.

It’s fine. Might even turn out good. But it’s not ‘the future of e-sports’.

Here’s the thing: E-sports isn’t ‘the future of e-sports’.

Like blockchain before it, and growing weed now, e-sports isn’t a thing so much as a how.

The big money in blockchain isn’t using blockchain, it’s what you’re using it with, and for, and with who. Build a blockchain in your basement, nobody cares. Build one that helps health insurance companies keep track of your health records in a better, faster, cheaper, and more secure way than the current fax machine network, and do it for Blue Cross, and you’re onto something.

Grow weed by the airport in Edmonton and you’re nothing. Use that weed to extract oil, then turn that oil into an easy to drink beverage sold in convenience stores, sold for a premium, and you’re onto something.

Buy an e-sports team, consisting of 15 year olds who love drama and will leave your team next week because someone else offered them a better gaming chair, and pay $35 million for the franchising rights for that team to play a game nobody really plays much anymore, and you’ve got nothing.

But develop the game they’re playing, selling that game to millions, earning billions in DLC, selling those franchise rights and bringing in sponsors to the game proper? Now you’re onto something.

Ninja may be the world’s most famous e-sports personality right now, but he doesn’t actually play e-sports tournaments often. Partly because he’s not that good when it comes right down to it, but mostly because he makes a shit ton more money by NOT participating in tournaments that would show others are better than him, so he can instead just stream his games to teenagers who want him to say their name while he’s shooting noobs in a miniskirt skin.

Microsoft’s Mixer streaming platform last week paid Ninja $10 million to leave Amazon-owned Twitch, where he has a large paying audience, to commit to their platform instead.

As I look at Mixer at the time of writing, they’re all in on that bet:

He’s got 22,000 viewers right now, which is more than he often had at Twitch recently, where his Fortnite all day/every day routine was running a little stale and being overtaken by kids roleplaying on modified Grand Theft Auto 5 servers.

The live streaming version of the above often features nightly streams from some of e-sports bigger names over the past few years, who’re having more fun (and making more money) improv’ing characters and storylines in a game that was old three years ago than they are playing Fortnite or Apex or whatever the latest battle royale ripoff is.

That’s not to say e-sports is nothing. It’s immense. It’s gigantic. But it’s about CONTENT, not tournaments, not teams, not players. Owning individual streamers could be more profitable than owning tournaments, or teams, or pro players because daily content can be monetized better through subscriptions and donations than one-off events can be when they’re watched for free.

The biggest e-sports plays on the public markets don’t exist yet. Sure, some of them will run (and are running right now), but those are chancers, first movers, the gamblers who hope they’ll get a quick market cap boost while they figure out exactly how to make money out of their business.

Like the early days of weed, sometime you’ve gotta fake it til you make it.

TheScore (SCR.C) has pivoted for the 19th time and settled on running a sports betting app as their future, which may have upside but isn’t exactly an e-sports play.

Victory Square (VS.C) has some e-sports interest, but is mostly chasing as it was in the blockchain days, making some small investments in mobile games as it waits to see what pokes its head out as a bigger opportunity.

ePlay (EPY.C) finally got its Big Shots mobile game on Android, but the year folks have been waiting for that to happen has taken them off most radars.

Axion Ventures (AXV.C) has a massive market cap it’s midway through falling off, while creating games for Asian partners that North Americans have yet to get excited by.

Millennial Gaming (GAME.C) is all-in on a global racing game contest with a top prize of a $1 million racing game rig that will take gamers to a real-life 40-minute race, with Formula 1 drivers judging winners. That might be a real fun event, but I’m not sure where the money comes back.

Versus Systems (VS.C) has a contest platform that allows game creators to offer prizes in-game via participating brand partners. That’s not bad, because it doesn’t rely on building something new and getting people to it – it runs on top of the infrastructure already being used. And the market cap is only leaning high, not excruciatingly freaking high, as it is elsewhere.

[contextly_sidebar id=”8IOvi2yWoxFULZUT1CkXiNZEbQkXyTb4″]Finally, the elephant in the room: Enthusiast Gaming (EGLX.V) which makes real money and has built a large eyeball repository by sucking up cheap and well read game-related media outlets, is joining forces with Francesco Aquilini’s Luminosity later this year. This is cited to be the first ‘big e-sports’ deal, and on market cap alone it will be.

But, for mine, I’m not sure why Enthusiast is up for it. Luminosity is a ‘team’ play, and teams really don’t make much money. They’re usually vanity projects for rock stars and athletes who dig gaming and want to be surrounded by better players. Luminosity’s Overwatch League team in Vancouver, which is comprised entirely of South Korean kids who don’t live in Vancouver, earns $1 million when it wins the league. It cost $35m to get the franchise.

My kid watches the games. It’s very successful. I just have no idea how it can make any money for anyone but the sellers of the franchise, Overwatch developers Activision Blizzard (ATVI.Q).

But there are other plays coming. One I’m very much entrenched with is AMPD Technologies, which lists when the BCSC is finished going over its paperwork (maybe September?). AMPD engages in the building of high performance computing data centres, the likes of which will be needed everywhere if we’re ever going to get AI, VR, AR, fast video render, low latency e-sports hosting and ‘the Netflix of video games’ happening.

Instead of software driven ‘one size fits all’ cloud computing, which Microsoft, Google, and Amazon make billions on, AMPD runs in the artisinal side of the cloud, helping large companies with specific and heavy computing needs utilize data centres that are smaller in real estate, built to suit individual needs, have a green component that brings down costs and lowers a carbon footprint, but are also cheaper than the status quo, while delivering a better compute to the client.

If you play any popular game, you’re familiar with the constant crashes, time outs, and slow rendering that pollutes the scene. That problem is why Fortnite ate the earlier PUBG’s lunch, basically rebuilding their game but with cartoony graphics that requires less rendering energy, and making billions while doing so.

Server struggles are the number one bottleneck in game development right now. They keep virtual reality from growing, they keep game creators building games to suit lower grade connections, and they halt tournaments in their tracks.

Fix that, you open a thousand doors at once.

I’ve spent a few years with the AMPD team, ensuring when they land, they land in a way that hasn’t had all the value sucked out of them by insiders, and that’s exactly what they’ve set in play. Low float, low valuation, real deals in the works, pilot data centre already in business, founders stock escrowed for years, clean shell (also largely escrowed), low raise before public listing, entirely structured to allow for solid growth, no future blowout, and all participants to be in at the same level.

Final raise is still open. Go read all the docs and go over it with your smartest friend and diligence up a storm, boys.

NOTE: I AM CONFLICTED HERE. I own stock in the private company, have participated in the current raise, and know the founders well enough to have helped them dodge the usual bullets coming to market.

And, really, that’s what I’m hoping the e-sports sector, such that it is, starts doing. Keep it clean, don’t overyhype, get some real companies going that do real things that have dollar signs attached.

We won’t get that, obviously. The usual market forces and market deal dogs will pour in from every door and descend upon us like something out of World War Z.

But we, as investors, can be a bit smarter than we were with blockchain, and cannabis, and we can LEARN WHAT A STOP LOSS IS.

Ya wanna run with the bulls? Cool. Do it. But know when to hide.

FULL DISCLOSURE: I have informally advised both YDX and AMPD in the past, and hold AMPD stock currently.