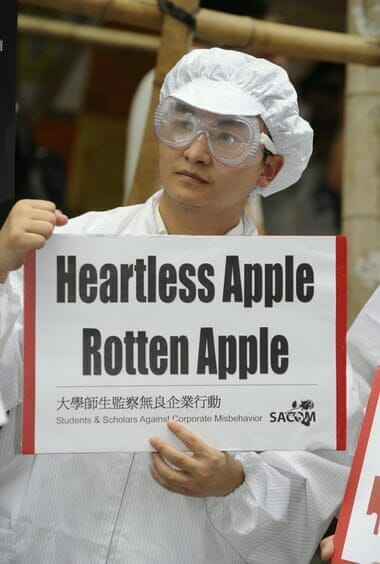 President Donald Trump tweeted out the next torpedo in his trade war with China today, aimed this time at Apple (AAPL.Q) CEO Tim Cook.

Apple asked the Trump https://e4njohordzs.exactdn.com/wp-content/uploads/2021/10/tnw8sVO3j-2.pngistration to exclude components for the upcoming Mac Pro desktop computer from import tariffs. His response:

Apple will not be given Tariff waiver, or relief, for Mac Pro parts that are made in China. Make them in the USA, no Tariffs!

The first torpedo in the trade war happened earlier this year, when Trump jacked tariffs by 25% on $200 billion in China goods, and warned he’d do it again on another $300 billion.

Previously, Trump had promised relief if companies could show that parts or products could only be obtained in China and have no strategic importance to Chinese industrial programs, or that the duties wouldn’t cause “severe economic harm.” Naturally, there’s no elaboration on the meanings of “strategic importance” or “severe economic harm” because he’s Donald Trump and The Donald doesn’t do elaboration.

So if Trump wins re-election it looks like Apple might be putting China in their rear window, which is probably for the best.

Not necessarily because Trump thinks he’s going to reinvigorate the American heartland by making companies do their manufacturing there—that’s ridiculous. You can’t get the toothpaste back in the tube once you’ve squeezed it out and sent it to China.

The likely consequence of Apple being forced to manufacture their products in the U.S. is that it will give Chinese companies like Huawei the leverage to kick Apple’s teeth in competitively. Nobody is going to line up for the new Apple iPhone when it costs between USD$30,000-$50,000.

The real reason that Apple being forced out of China is good isn’t entirely economic in origin—and hold on to your seats because we’re going to take a sharp left turn—but it’s because maybe democratic countries shouldn’t be supporting authoritarian regimes that brutalize their people.

Buried the lede on that one, eh?| Source: Giphy.com.

The counterargument posed by Chinese apologists is it’s easy for us to wax self-righteous, because we’ve never governed a country of 1.3 billion people of varying nationalities, ethnic backgrounds, linguistic divides and religious and spiritual inclinations. We have no idea if complications arise.

While that may be true, it’s safe to say that violent crackdowns would not be high up on our list of ways to deal with dissent. Also, the specifics of what makes China so attractive to foreign investors is usually a result of their brutality, because of the lack of regulations and the authoritarian culture.

For example, have you ever looked at your iPhone or iPad and wondered how many people died so you could have it at a premium? No, of course you haven’t. That would be crazy.

We don’t know anything about the process of materials sourcing, manufacturing, and supply and distribution chains that take the products from their raw components to the Apple store where you shell out your thousands of dollars. Maybe we should.

What we do know is that the U.S. can get a comparative advantage by offshoring to China (and other countries), because China’s relative manufacturing cost is lower than the U.S.

That may have been true in previous decades, but it’s definitely changed as China’s economy has developed.

“There’s a confusion about China… the popular conception is that companies come to China because of low labor cost. I’m not sure what part of China they go to but the truth is, China stopped being the low labor cost country many years ago and that is not the reason to come to China from a supply point of view…

…the reason is because of the skill… and the quantity of skill in one location… and the type of skill it is. The products we do require really advanced tooling. And the precision that you have to have in tooling and working with the materials that we do are state-of-the-art. And the tooling skill is very deep here.

In the U.S. you could have a meeting of tooling engineers and I’m not sure we could fill the room. In China you could fill multiple football fields.”

Sure, Tim. So what’s the real cause of China’s manufacturing popularity? Could it be this? 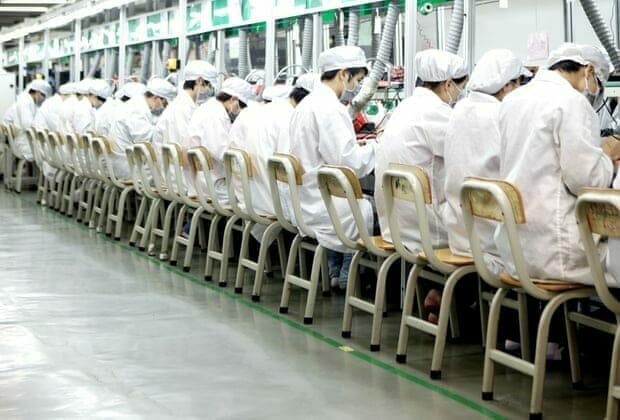 The above image features Foxconn City, one of Apple’s manufacturing subsidiaries, and it’s from a story written two years ago. This is the same company that had to install suicide nets to forestall the rash of workers leaping to their deaths, starting in 2009 and ending, well, probably never. The last one was last year.

“We are on top of this… Foxconn is not a sweatshop. It’s a factory–but my gosh, they have restaurants and movie theatres… but it’s a factory. But they’ve had some suicides and attempted suicides–and they have 400,000 people there. The rate is under what the U.S. rate is, but it’s still troubling,” said Steve Jobs, Apple CEO, when this story first broke in 2009.

This one can’t be written off with statistics quite so easily. A country’s suicide rate is a strong indicator of the quality of life, and the United States has been sick for a long time.

If a company boasts a suicide rate at all, then there’s definitely room for investigation and condemnation.

From the article mentioned earlier:

There is no improvement since the media coverage, The work is very high pressure and he and his colleagues regularly logged 12-hour shifts. Management is both aggressive and duplicitous, publicly scolding workers for being too slow and making them promises they don’t keep…. They paint a bleak picture of a high-pressure working environment where exploitation is routine and where depression and suicide have become normalised.

Apple is just one of Foxconn’s clients so their departure doesn’t necessarily mean this will stop, but it’s a step in the right direction.

It’s strange to think that something good may come from Donald Trump’s bumbling economic policies.

How I learned to trade stocks at age 15

These 2 Stocks Will Move the Nasdaq Next!