One summer, vocationally and emotionally adrift, I fell in love with a tall older woman who wore metallic sparkles in her hair.  She liked to tell stories.  Her favorite one was about how we were going to get rich together.

I believed in her.  I gave her everything I had.

We were walking on the beach one evening when she suddenly shrunk, grew sideburns and vomited on the sand.

When I tried to comfort her, she slapped me hard on the cheek, told me she was leaving town and I was fool for believing her stories.

My lover’s name was gold.

The Bitch is Back!

Every jilted fool like me who still owns gold stocks has a good summer. 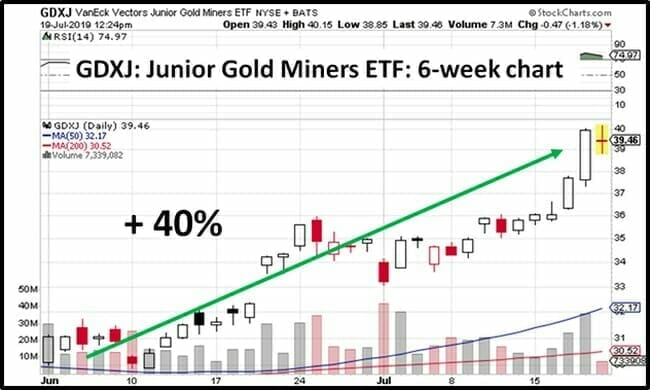 On Thursday evening, gold prices hit their highest levels in six-years (USD $1,450) as investors anticipate an interest rate cut by the US Fed, and Washington and Tehran bark at each other.

Gold prices pulled back $20 today.  Over the summer bullion has benefited from the fall in bond yields.  Some sovereign bonds are now negative-yielding, meaning that investors are paying for the privilege of lending money to borrowers. In that environment, owning gold is a more attractive option (So is getting stabbed in the genitals).

And let’s not forget: the Fibonacci Retracement Chart indicates that the next support level is at – ha – I’m kidding!  Fibonacci lines?  This lady has stronger predictive powers:

We believe that the most significant medium and long-term catalyst to gold prices is debt.

To service the debt, governments are printing money.  Supply and demand.  Theoretically, an over supply of paper money, will cause its value to go down.

Do you know who believes in that theory?

Last week the World Gold Council (WGC) announced that central bank gold demand is up 73% this year compared to 2018.

“In a survey of central banks conducted by the World Gold Council and YouGov, 54% of respondents expect global holdings to climb in the next 12 months amid concerns about risks in other reserve assets,” stated Bloomberg on July 19, 2019.

Nations have expanded gold holdings by about 14% since 2009, with the hoard now valued at roughly $1.6 trillion. Authorities seek to diversify away from the dollar. Bullion holdings rose by 651.5 tons last year, the most since 1971. 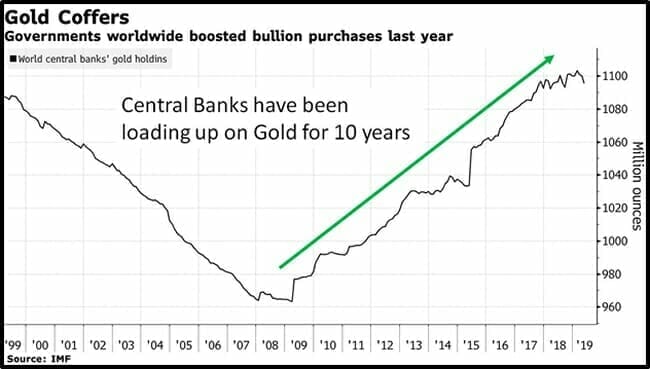 If the central banks are right, and the collective weight of global debt catalyses a flight away from paper currency, the junior gold companies will go ballistic.

Equity Guru mining expert Greg Nolan has had a busy month promoting his book, “Highballer: Tales from a Treeplanting Life.”

Despite his book-promotional duties,  Nolan is bringing us geological intel from companies like EmGold Mining (EMR.V) that “has a portfolio of assets in Nevada and Quebec.”

And Falcon Gold (FG.V) that has a number of gold, base and battery metals projects in its portfolio.

A couple of months ago, Nolan also told us about Black Rock Gold (BRC.V) that “holds a large, 4,537 hectare chunk of prospective terrain strategically located near the confluence of the Carlin Trend and the Northern Nevada Rift of north-central Nevada.” 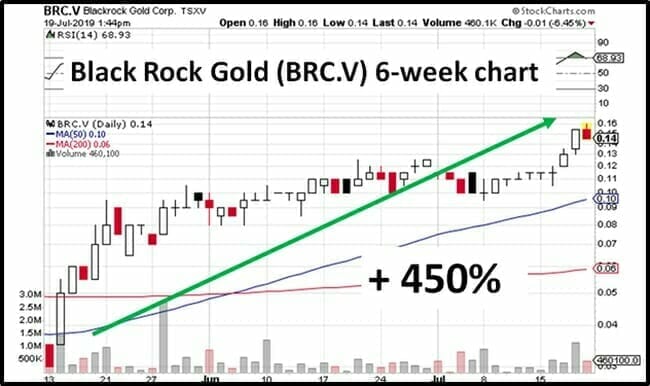 What is the next gold junior stock to run?

“Nexus dropped news yesterday that turned a few heads,” stated Nolan on March 6, 2019, “Judging by the volume, I suspect the market is waking up to the company’s latent discovery potential.” 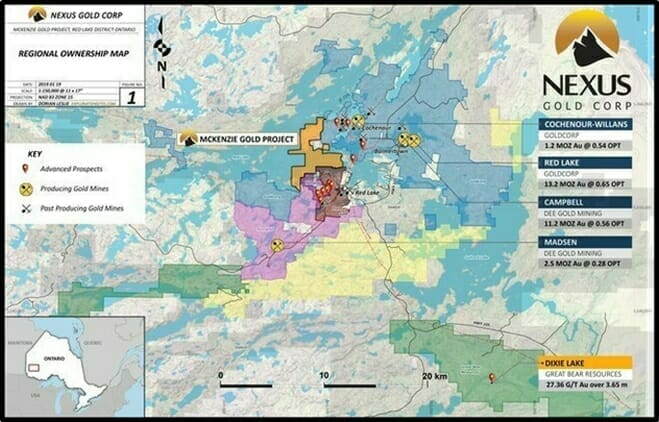 This morning, after I cashed my $65,000 cheque, I went out for coffee with gold.

She doesn’t do the metallic-hair-confetti-thing anymore.

She looked older, more reserved.  I guess that’s what happens when you hang out with central bankers.  At one point, she reached across the table and held both my hands in hers.