We’re in the business of marketing companies to people who like to invest in stocks with a high risk/high reward mindset. Sometimes folks call us ‘pump and dumpers’, usually if they haven’t read our work, but we ultimately only write what we believe to be true and we have a track record of writing negative things about clients when warranted. We even have a page about it on our ‘about us’, pointing to client stories where we went negative.

That’s our ultimate disclosure. If you’re a client or a rando, we treat you the same – truth sits above all else, because the financial health of our reader is our business model.

Not everyone out there follows that mantra.

And sometimes, when a company gets desperate to shift the share price for a bit, it does stupid things.

MONTREAL, July 01, 2019 (GLOBE NEWSWIRE) — Relevium Technologies Inc. (TSX.V: “RLV”, OTCQB: “RLLVF” and Frankfurt: “6BX”) (the “Company” or “Relevium”), announced today that it has been made aware of and requested by the OTC Markets Group, Inc. to comment on recent promotional activity concerning its common shares traded on the OTCQB market.

On June 27th, 2019, the OTC Markets Group sent the Company copies of three newsletters sent on June 25 and June 26, 2019 by SmallCapFirm, a third-party marketing and awareness firm utilized by StockWireNews, LLC (“StockWireNews”), which in turn was utilized by one of the Company’s marketing firms, Shore Thing Media, LLC (“Shore Thing”). The Company was not aware of the newsletters until the OTC Markets Group sent the copies on June 27th, 2019.

After inquiry of management, except with respect to the engagement of Shore Thing as further described below, none of the Company’s officers were involved, directly or indirectly, with the creation or distribution of promotional materials nor were we asked to provide, nor did provide any editorial content.

This is a common tactic used by less scrupulous stock marketers; set up a website, then set up a legion of ‘partner sites’, which in turn have more ‘partner sites’, then use them to send out content that is just beyond the pale, to email lists, text message lists, WhatsApp users, Twitter followers, and more.

If they get dragged for it, said websites disappear, and their parent companies are far enough down the plausible deniability line to escapeblame.

Relevium may not have actually known where the excessively hyped content the OTC is complaining about came from, or who it went to, but they’re going to take the PR hit from engaging someone who went too far.

The three newsletters discussed an overview of the Company’s business along with other referenced firms. The Company does not believe the statements referencing it in the promotional materials were false or misleading. Other commentary in the newsletters appears to express the author’s personal opinions.

The promo started June 25 and it appears to have worked. Two days later, RLV saw a big spike in volume, though not a big spike in stock price, which means plenty of folks were primed to sell into any buying. 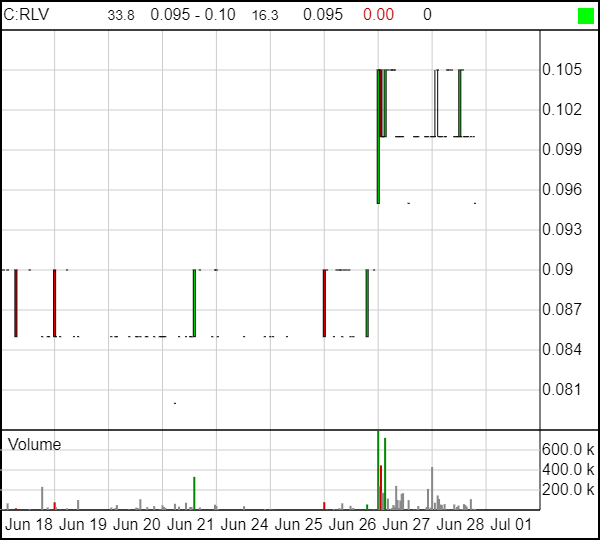 After inquiry of Company management, none of the Company’s officers, directors or controlling shareholders nor third-party service providers, have sold or purchased Company securities in the past 90 days

So when you say ‘none’, you really mean, ‘some’ purchased almost half a million dollars worth within a month of the promo starting..

This is some bullshit. It’s standard practice, when you know hard promo is going out, to toss out a news hit so you can point to it in a crunch and say, ‘it must have been news we were going to have an investor call that had folks suddenly buying a long dead stock.’

But if any of the above makes you feel skeezy, you won’t want to look at the disclosure statement on SmallCapFirm.com, because it’s an outright fucking doozy.

INVESTORS SHOULD READ THIS DISCLAIMER

*** Remember: When any of my Campaigns End, the Stock of the Profiled Issuers Will Crash.

Well that’s comforting. I wonder if the sales person who sold Relevium this program outlined this warning before swapping checks?

SmallCapFirm.com is owned and operated by MM Media Solutions LLC, which is a Florida based Limited Liability Company.
We are paid advertisers, also known as stock touts or stock promoters, who disseminate favorable information (the “Information”) about publicly traded companies (the “Profiled Issuers”).

What will happen to the shares that we hold during the Campaign?

We will sell the shares we hold while we tell investors to purchase during the Campaign.

You… wait, you what?

What will happen when the Campaign ends?

Hold on to your ankles, bois.

Is the Information complete, accurate, truthful or reliable?

Give me a damn break here..

We may sell securities of the Profiled Issuers for less than target prices set forth in the Information, and we may profit by selling my securities during the Campaigns while investors encounter losses.

WHY DO WE CARE?

We lost a deal with Slang worldwide that way, when they worried any promotion would be seen as bad. We exited a deal with Fincanna for the same reason, when it took them weeks to okay basic news coverage pieces for fear they’d be seen as too promotional. These bullshit promo firms make regulators put up barriers that make our lives harder, and they worry corporate lawyers who don’t want the black mark of the OTC on a deal.

Look, we’re conflicted at the best of times, simply because we accept money from out clients, but we try to ensure you see both sides of any investment mentioned here, even if it’s a client company. What our clients are paying for is exposure, not bullshit. They want to be in the conversation, not blistered across shitty fake sites with disclosures that tell you up front ‘this is an illiquid stock’ and ‘you’ll lose most, if not all your money’ buying it.

I mean, how must Relevium execs and board members feel knowing that’s how their vendors describe them? How must long term investors feel knowing this is who their company does business with?

Relevium does mention other marketing vendors in their news release, and some of them are legit enough.

A lot of companies use INN, FTM, and Stockhouse, and they’ve been around for a while now. We consider them to be in our orbit. Say what you will about their particular style or audience, but they live and die on being at least legitimate enough to stick around for a while. Their websites don’t disappear, they don’t send SMS spam, they don’t straight up lie.

But when a company gets into bed with a group that is SO CLEARLY a pump shop, and a pump that expresses upfront, in big lettering, that they’re completely full of shit and think nothing of the stock they’re hyping, or the people buying it and losing money, that’s just a terrible look for everyone.

In short: Don’t listen to anyone, us included, for a ‘go signal’ to buy a stock. Add things to your watchlist, keep an eye on them over time, get a lot of different opinions and keep score of who gives you good information, and who feeds you garbage.

Read the disclosure. Protect your dough.

As for Relevium, i don’t see who’s going to buy that stock going forward. And maybe, if you think about it, that’s why they decided to go to the dark side.

FULL DISCLOSURE: Don’t own RLV, haven’t talked to them about a deal since 2015, no dog in the fight.

UPDATE: The original headline for this story was “Relevium hit by OTC promotional investigation” – while we maintain that’s accurate, the company has asked that we remove the word investigation from the headline. We’re man enough to comply.

I hope all is well.

The post you made today is inaccurate. The company in not under investigation and none of the allegations that you are claiming are true not fair to investors.

Central is the fact that I purchased shares from another large shareholder (at a 62% premium) because because I am fully vested into our company.

I would like for you to give me call as the information you are distributing is incorrect.

I take no issue with your buying your own stock. I take issue with you saying no insider bought the stock ‘except’ two, including you.
I’m here for a call any time. chris@equitystaged.wpengine.com

How are you possibly allowed to write this and add “opt in” boxes all over your page. Stock would’ve never crashed if you didn’t write a ridiculously scathing article…. where’s your disclaimer scumbag?

Bottom of every page?

Awesome article Chris,
Tell the truth and appears by the comments here they do not know the truth from the real thing themselves, just scum bags themselves.

it seems that you were correct about Aurelio bullshit