In poring over my charts in recent sessions, I’ve come across some interesting accumulation patterns in the stocks we follow here at Equity.Guru.

Even though the vistas of northern BC’s Golden Triangle are blanketed in snow, certain junior exploration companies are experiencing slow but steady price gains.

This type of constructive price action plays into the idea/theory that we may have reached peak gold. We may have reached a peak in discovery and production. Think about it: the vast majority of the largest near-surface deposits on our tiny planet have already been discovered and are either in production or tapped out, spent. A sobering concept, this.

Quality exploration projects, particularly those in mining friendly jurisdictions, are few and far between. Those that still exist will attract the attention of resource hungry predators who are rapidly running out of the metal, desperate to replace the ounces they deplete every day they conduct business – every day they dig ore out of the ground. 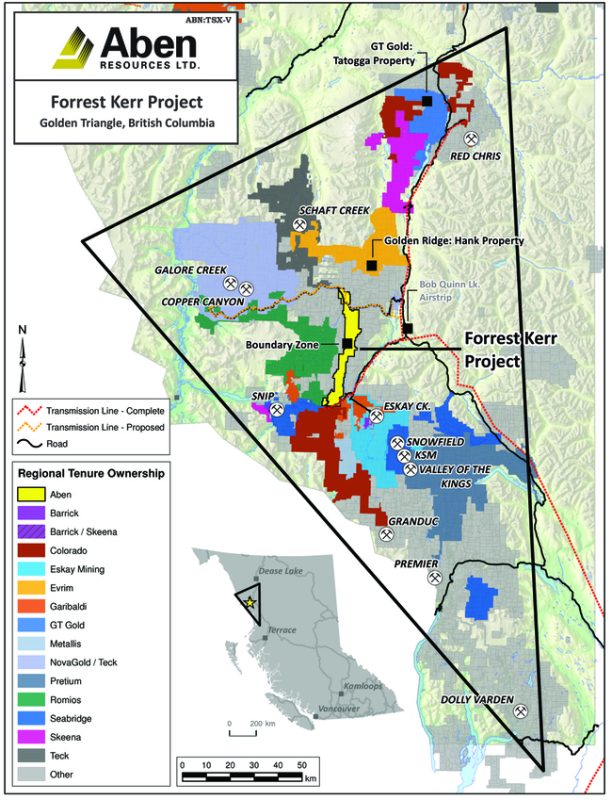 Aben Resources’ (ABN.V) flagship 23,000 hectare Forrest Kerr Gold Project located in the heart of the Golden Triangle could well be one of those standout projects, and this is why, I suspect, we’re seeing steady accumulation this early in the season.

The project is tucked in along an extremely favorable geological setting, a subject we explored six months back.

The Aben party got started last summer when they announced an outstanding drill hit in hole FK18-10 at their North Boundary zone.

There were multiple high-grade zones within this one interval. The mineralized intercepts began at 61 meters and ended at 186.

Highlights from the FK18-10 discovery hole:

Subsequent drill results at North Boundary were good, but the company’s momentum to follow-up on the FK18-10 discovery was severely hampered by access restrictions, specifically, the number of drill pads they were allowed to construct.

The company was expecting their drill permit within three months – it took the BC government over six months to hand it down. By that time, their exploration window slammed shut.

The entire 2018 drilling campaign was conducted from only a handful of pads.

When you tag a new discovery, after sizing things up, you’ll want to reposition your rig and construct drill pads in areas that will give you the best angles with the drill bit. Angles are everything when you’re probing for structure.

With a structurally controlled project like Forrest Kerr, with its proximity to the major fault and the sub-faults it created, there’s a lot of overprinting, that is, there were numerous mineralizing events that had all kinds of fluids pushing their way in over time. Having the flexibility to position your drill bit just so, to cut through the noise and home in on the meatiest targets, is critical, especially after tagging a discovery like FK18-10.

I used to be a contractor in the reforestation industry. I have bad memories of running heli crews on steep mountainous settings, needing to cover 50-plus hectares of terrain and being forced to operate from only one or two helipads, when 10 or 20 were required. It was always a setback, a Mission Impossible. Such was the situation at Forrest Kerr last summer.

According to Aben president & CEO, James Pettit, every conceivable type of alteration can be found at North Boundary. Geologically, it’s a busy setting.

Even with all of the challenges, North Boundary gave us a number of intriguing high-grade hits along with low-grade intervals demonstrating fairly decent continuity in an area measuring 100 by 300 meters.

When we first began our coverage of Aben, on the heels of the FK18-10 discovery hole, I began wondering how the new discovery would tie in with a historic 326 g/t interval Noranda tagged 230 meters to the south in 1991.

Due to the drill pad permitting issue, Aben was unable to probe that high-grade area. They had only a limited number of pads to drill from and Noranda was too far away. Connecting the dots with that historic hole would have opened things up considerably (author’s speculation).

In a recent interview with CEO Pettit, Gwen Preston reframed the drill pad debacle constructively. To paraphrase: “the lost opportunity in 2018 leaves more on the table for the 2019 field season.” I suspect she’s right.

It’s important to note that Aben is now in receipt of a multi-year, area based permit. This sets things up nicely for the upcoming field season.

The geological sleuths behind Aben have a much better idea of North Boundary’s orientation, they know it’s structurally controlled, and they know where to drill next. But to fine-tune their models, to home in on the high-grade structures with greater confidence and accuracy, the company plans a geophysical survey over the entire area.

The last geophysical survey was performed two decades ago, and not over the entire property. Today, they can easily cover the entire project with a simple, cost-effective drone sweep. This could open things up even further, from a targeting perspective.

By the way, this team of geological talent includes Ron Netolitzky, a man directly involved in no less than three major gold discoveries: Eskay Creek, Snip and Brewery Creek. Ron is old school. He’s likely the kind of man who doesn’t need a geophysical survey to successfully connect the dots at North Boundary (author’s speculation).

The Aben team have defined multiple targets worthy of the drill bit at North Boundary. They’re still working on their first target. There are plenty of high priority targets that remain untested.

Something else to keep in mind: though Eskay Creek had good results in the early going, it was hole # 107 that unlocked its full potential. Out east, it took 76 holes to tag Hemlo.

Bottom line: the North Boundary zone is not done, not by a mile. Nor is South Boundary.

It’s possible that Aben’s Justin project will see a fair amount of activity this year. 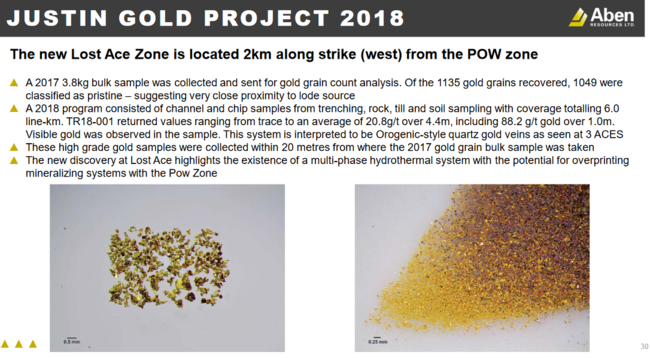 The company can put boots to the ground at this Yukon project in April, giving shareholders well over a month of exploration exposure before they hit the ground running at Forrest Kerr later in the spring.

For a quick primer on Justin, hit the following link:

Wrapping this one up

The company is currently in data compilation mode, working on a drilling plan for both North and South Boundary.

Unlike last season, Aben is fully permitted for drill pad construction at Forrest Kerr. In this upcoming field season, their drill rig positioning will be vastly different from last year.

With just under $6-mill in the till, they can poke a whole lotta holes into Forrest Kerr without the need for a raise. A hugely important consideration, this.

Further up the page, we talked about recent strength in the stock and how it may relate to the lack of significant new discoveries coming on stream. There appears to be an appetite for companies like Aben.

With 111.46 million shares outstanding and a market cap of $20.62M based on its recent trading pattern, ABN belongs in a diversified ExplorerCo portfolio.

Full disclosure: Aben is an Equity Guru client. We own stock.