Aben Resources (ABN.V) was in the news again recently, this time reporting progress at its Justin project in the Yukon Territory.

Aben’s flagship asset – its 23,000-hectare Forrest Kerr Gold project – is located in the heart the GOLDEN TRIANGLE of northwestern British Columbia. As many of you may already know, the Triangle plays host to a score of world-class mines and deposits: Eskay Creek, Snip, Galore Creek, Copper Canyon, Schaft Creek, KSM, Granduc, Red Chris (I’d like to include Pretium’s Brucejack deposit to this list, but the jury is still out on that one).

The company’s Justin project is also a highly prospective piece of ground. 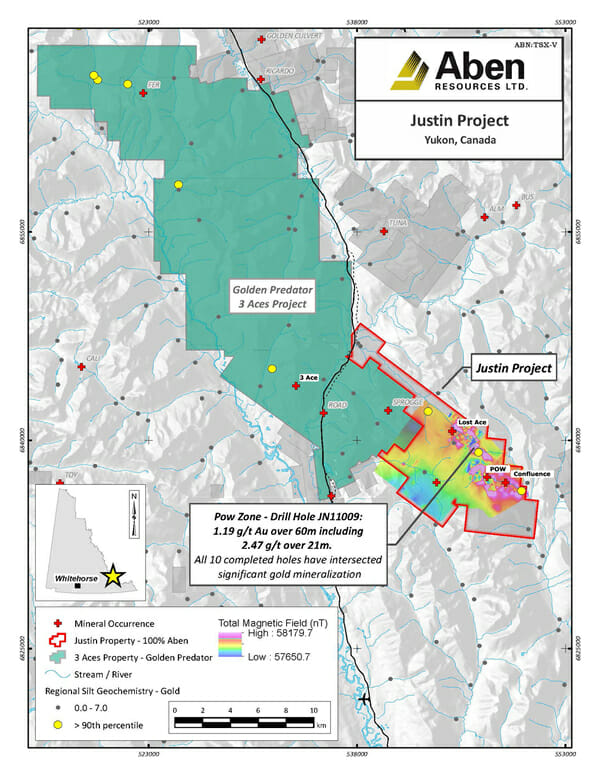 Justin, acquired back in 2011, is 18,314 acres of terra firma which ties in nicely with Golden Predator’s (GPY.V) 3 Aces project in the southeast Yukon (above map).

3 Aces is what’s known as an Orogenic gold deposit. These types of deposits were formed during the collision of continental plates, an extreme bit of tectonic violence which gave rise to mountains.

This collision of plates pushed the rock deep within the Earth’s crust where high temperatures and pressure worked their magic. A metamorphism took place which caused gold-rich fluids to migrate upwards, filling the gaps between cracks, faults, and shears. Gold-bearing quartz veins were the upshot.

Some of the largest gold systems on the planet are orogenic in nature – the California Mother Lode Belt and the Juneau Gold Belt are good examples.

The style of mineralization at Aben’s Lost Ace Zone is interpreted to be orogenic.

Justin has a number of highly prospective zones.

Lost Ace is located two kilometers west of Aben’s POW Zone where past drill results indicate the potential for bulk-tonnage gold mineralization. Highlights from previous drilling campaigns at POW include intercepts of 1.19 g/t Au over 60.0 meters (including 2.47 g/t Au over 21.0 meters) and 1.49 g/t Au over 46.4 meters.

As noted above, the mineralization at Lost Ace is interpreted to be orogenic – quartz-gold veins that bear a striking resemblance, geologically, to Golden Predator’s 3 Aces property.

Commenting on the results from this 2018 surface campaign, Mike Burke, P. Geo., and former chief geologist with Golden Predator stated:

This new zone at Lost Ace is located at the northern end of a 250 meter gold-in-soil soil anomaly that remains open in all directions. The soil geochemical response may be somewhat muted due to the thick glacial cover in the area. Channel sampling at Lost Ace in 2017 returned 1.44 g/t Au over 5.0 m including 4.77 g/t Au over 1.0 meter.

A bulk soil sample was also taken from the area which yielded 1135 visible grains of gold.

The majority of these gold grains are ‘pristine’, suggesting the bedrock source is nearby.

In addition to the new Lost Ace Zone, several other high-priority exploration targets are located within 1 km of the POW Zone. Defined by geophysics and geochemistry, these targets remain untested and represent significant potential for expanding the current extent of the intrusion related gold system.

The more I learn about this Yukon project, the more I like it.

Meanwhile, next door, Golden Predator continues to aggressively probe its 3 Aces project where it continues to tap new mineralized structures.

Another iron in the fire:

There’s a third project in Aben’s stable that we need to touch on briefly before signing off:

SSR is hitting the ground hard at Seabee. Note Aben’s property position, in yellow, on the above map.

According to a recent SSR exploration update, infill and exploration drilling at Seebea/Santoy included 35,258 meters in 104 underground holes and 15,390 meters in 61 holes drilled from surface. This is an ambitious drilling campaign.

Highlights from SSR’s program include:

Aben is keeping a close eye on SSR’s progress in the area. They’re studying SSR’s discovery model. This should give them an edge when they put boots to the ground in the coming weeks.

Importantly, Chico can be worked year-round which has the potential to generate newsflow while Forrest Kerr and Justin are snowed out for the winter.

The Justin project should see a fair amount of activity next season – these new results warrant it.

I suspect Chico will be the next piece of news to drop from the company. 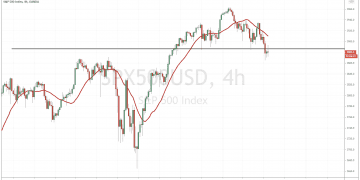