Roxgold (ROXG.V): Should investors be scared of Burkina Faso? 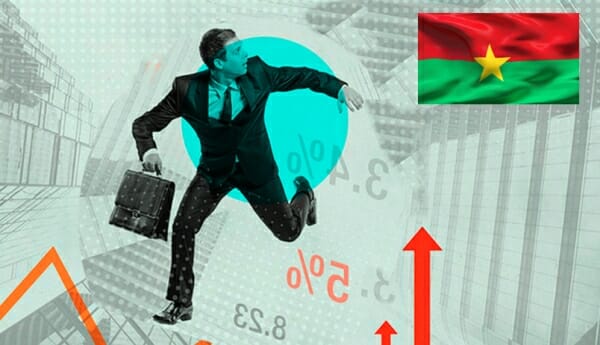 Roxgold (ROXG.V) is a $284 million gold mining company operating the Yaramoko Gold Mine in the West African country of Burkina Faso.

Before we get more into Roxgold, let’s deal with the elephant in the room.

Last week, a Canadian mining-executive/geologist, Kirk Woodman, was kidnapped in Burkina Faso from an exploration camp and then fatally shot

The killing is “drawing attention to the deteriorating security situation in Burkina Faso and the risks resource firms face in unstable regions,” stated CTV News. 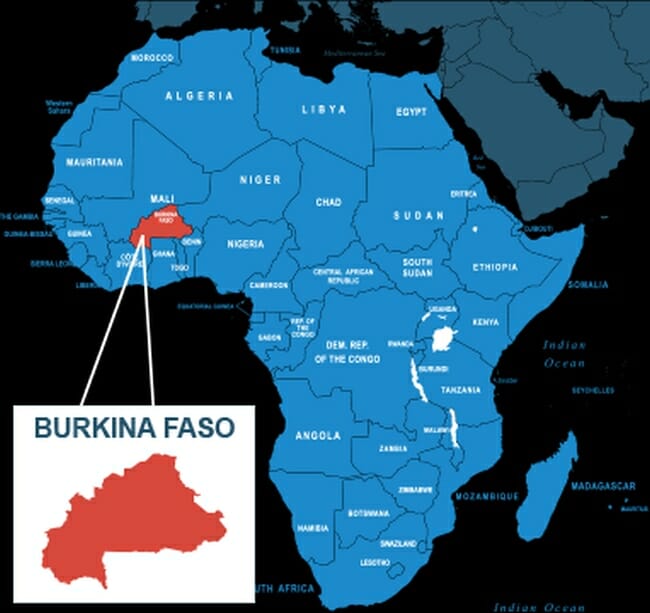 One of the poorest nations in the world, Burkina Faso is victim to violent outbursts, most of which are attributed to the jihadist group Ansarul Islam – who have sworn allegiance to Al-Qaeda.  This group usually operate in the North and the east.

“We’ve never seen this before in the nearly three decades I worked there,” stated Werner Claessens, a Burkina Faso geologist and friend of Woodman.

This news comes after Edith Blais, and her Italian traveling companion went missing in Burkina Faso last month.  The Canadian government is now treating Blais’ case as a kidnapping.

The Canadian government has issued a “Avoid Non-Essential Travel” warning for Burkina Faso, “due to the threat of banditry and kidnapping”.

Headlines can distort perceptions of reality.

The annual rate of homicide In Burkina Faso is 67/100,000 people – compared to the U.S. rate of 94 homicides/100,000 people.  A Burkinabé (Burkina Faso resident) is 34% more likely to be murdered on the streets of Los Angeles, then Ouagadougou.

But that doesn’t make the West African country a safe destination for foreigners – who are often targeted.

So let’s agree that Burkina Faso rates below Phuket, NYC and Rome as a sensible holiday destination. If you are seeking outdoor thrills with a frisson of danger, we recommend kite-sailing.

But is Burkina Faso a good destination for your investment dollars?

This question is pertinent because Burkina Faso is pregnant with gold.

Last year about 53 tonnes of gold were mined in the country – worth about $3.35 billion dollars at the current spot price of CDN $1,690.

Endeavour Mining (EDV.V) – for example – is a $2.4 billion gold company operating in Burkina Faso.  According to a recent Endeavor Mining news release, EDV is on track to meet its 2018 production guidance of 350,000 ounces of gold at a cost of about $700 an ounce.

Endeavour’s security protocols are not publicly divulged (duh) but we can forecast with a high level of certainly, EDV has made rigorous efforts to protect their employees & product.

We have recently written about other Burkina Faso-based miners, Nexus Gold (NSX.V), Sarama Resources (SWA.V), and West African Resources (WAF.V) – none of them have reported operational disruptions due to security issues.

Factor in, that in early 2019, there are multiple screaming buy-signals for gold.

The answer is “Yes”: Burkina Faso a good destination for your investment dollars.

There is a second, equally important question:

Are there ethical reasons NOT to invest in Burkina Faso?

How about a less precious/conceptual question: would we enjoy working in one of EDV’s Burkina Faso mines?

The answer is “No” – not any more than we would enjoy working in an electronics factory in Shenzhen, China.”  But in the last 25 years, China’s factories helped drag 400 million people out of poverty.

All corporations are morally compromised.  Canadian-based mining companies must comply to strict environmental regulations.  The laws governing human rights are looser – and in our opinion – inadequate.  That is Canada’s problem to fix.

If you think working in a non-corporate Burkina Faso gold mine is a better option, watch this brilliant and heart-breaking documentary.

“In a recent interview, Burkinabe Mining Minister Idani Oumarou stated that $100 million had been invested by companies seeking to explore gold prospects in Burkina Faso,” wrote mining.com, “The government typically retains 10% ownership of these mines and benefits from various royalties and taxes imposed on foreign companies.

We believe that the people of Burkina Faso are better off with international miners than without them.

So, in our opinion – there is no ethical problem investing in Burkina Faso.

Which brings us back to Roxgold. 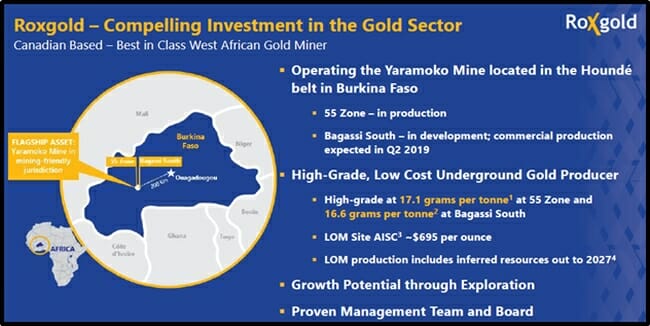 The 55 Zone mine went from its initial discovery in 2011 to production in five years and was completed early and under-budget.

Roxgold has been increasing inferred resources at depth at the 55 Zone and plans to infill drill these resources to enable conversion to reserves.

The numbers below are based on 9 months of operation, ending September 30, 2018. (basically, the company is pouring a lot of gold and spitting out a lot of cash).

“Our company’s success is directly linked to our capacity to build and maintain constructive relationships with our host communities,” states Roxgold.

“With the recent under budget completion of the Bagassi South project, Yaramoko’s second high-grade underground mine, we expect to have a strong year in 2019,” stated John Dorward, President and CEO of Roxgold, “we are forecasting 2019 production to be between 145,000 and 155,000 ounces of gold.”

“For years Burkina Faso was able to avoid the kind of Islamic extremism that has affected regional neighbours such as Mali and Nigeria,” stated mining.com, but that grace period is over.

“The Prime Minister of Burkina Faso, Paul Kaba Thieba, has resigned from office along with his entire cabinet,” stated BBC on January 19, 2019, “No reason was given for the move, which was announced in a televised statement by the country’s president.”

What is the best reaction?

Full Disclosure: Nexus Gold in an Equity Guru marketing client.  There is no financial relationship between Equity Guru and the other Burkina Faso-based companies mentioned in this article, although the writer owns stock in all of them.