Sarama Resources (SWA.V): How to buy inferred gold for $4 an ounce 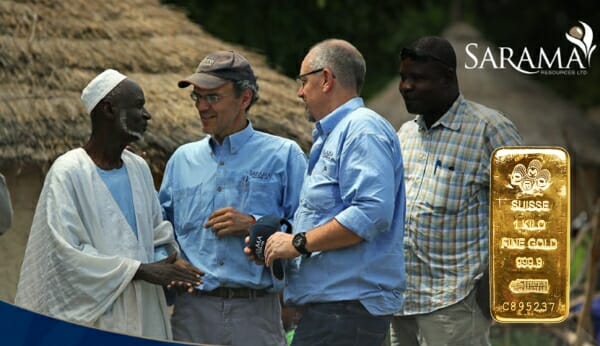 Before we get into the nuts & bolts of this investment opportunity, let’s define our terms.

According to 43-101 standards, an “inferred resource” is considered “too speculative geologically to have the economic considerations applied to it.”

An “Inferred Mineral Resource” refers to that part of a resource for which quantity and grade or quality can be estimated on the basis of geological evidence and limited sampling – but can not verified.”

In other words, a team of geologists has done enough drilling/metallurgy to say he/she believes the gold is there – but not enough to make an official announcement to investors, or to get a bank to finance a mine based on the assertions. 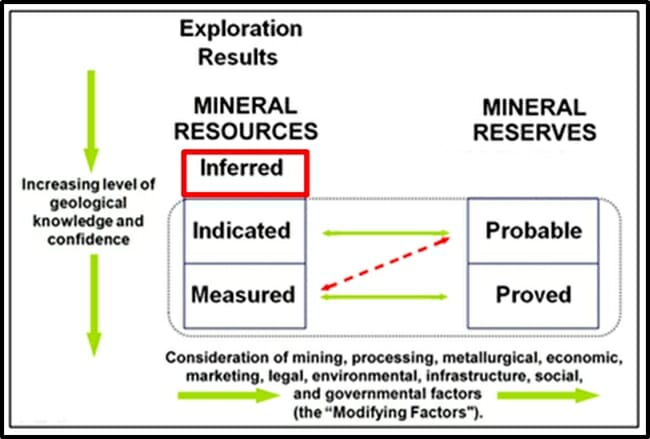 As you see from the above chart, “inferred” is the category of lowest certainty.

When you buy a micro-cap gold stock with an inferred resource, you are largely betting on the ability of the company to raise the level of certainty – which usually requires airborne surveys, drilling, financial modeling and metallurgy.

With a market cap $10 million, Sarama’s inferred gold is currently valued at $3.30 an ounce (we rounded it up to $4/ounce in the headline).  Gold in the measured (highest certainty) category is typically valued at $60-$170 an ounce.

Sarama recently regained a 100% interest in the South Houndé Project in Burkina Faso from Acacia.  The land package is contiguous to Sarama’s 100%-owned ThreeBee Project.

South Hounde and ThreeBee cover 1,400 square kilometers of greenstone terrane and the two projects are Sarama’s main thrust toward mine development. The mined ore should be suitable for heap leaching or a conventional gold plant.

Recent drilling on the ThreeBee Project demonstrates Sarama’s upside in this deal. 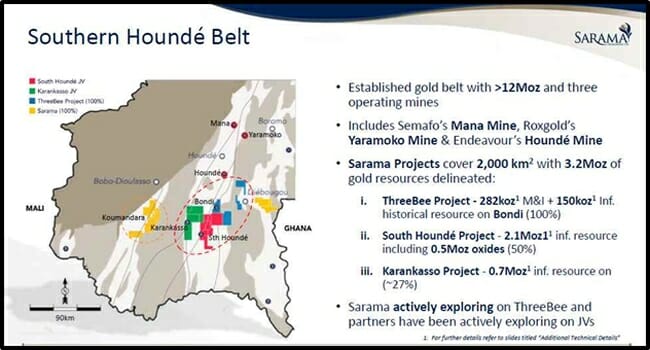 Sarama has benefited from about USD $13 million worth of exploration work done by Acacia on the South Houndé Project.

“We are keen to resume management of the South Houndé Project on a 100% basis,” stated Sarama President and CEO, Andrew Dinning. “This agreement is fundamental to consolidating our position in the southern Houndé Belt and puts Sarama on a solid footing to advance its interests towards mine development.”

Burkina Faso does carry political risk – but it is one of the world’s last mining frontiers, offering ground in a proven gold territory, that has never been drilled.

Is now a good entry point to purchase Sarama stock? 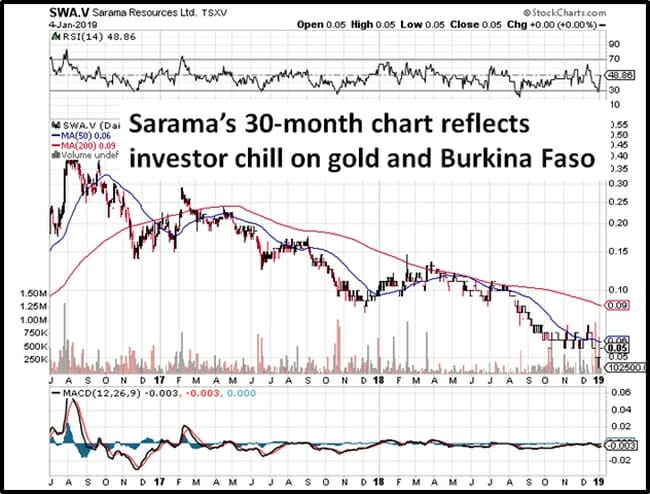 Endeavour Mining (EDV.T) – a $2.4 billion gold miner – is operating the Houndé and and Karma gold mines in Burkina Faso.

Burkina Faso has undergone less than 15 years of modern mineral exploration, remaining under-explored in comparison to neighboring Ghana and Mali.

Full Disclosure:  Equity Guru has no financial relationship with any company mentioned in this article.