Truck phones – why Siyata (SIM.V) is coiled like a spring

You probably don’t give a fo’.

But maybe you should.

Here’s why:  There are currently 12 million commercial and first responder vehicles on the road in the United States.

Most of them still use 70-year-old two-way radio technology to communicate with dispatch, eroding efficiency and driver safety.

What is it? – a business plan scrawled on a napkin?

Siyata sold $17 million worth of commercial phones last year in a market a fraction of the size of the U.S market.

SIM announced a deal with Bell Canada three weeks ago, a deal  with Motorola last week ago, and US Tier 1 Operator Supply Agreement today for its flagship product, the Uniden UV350.

Siyata is at a tipping point, I’ll explain why in a minute.

But first you need to understand this: operating a fleet of vehicles without commercial-grade communications hardware is like barking group instructions into a wind-storm.

Some of the information gets lost.  That can be expensive (for commercial fleets) – or deadly (for first responders). 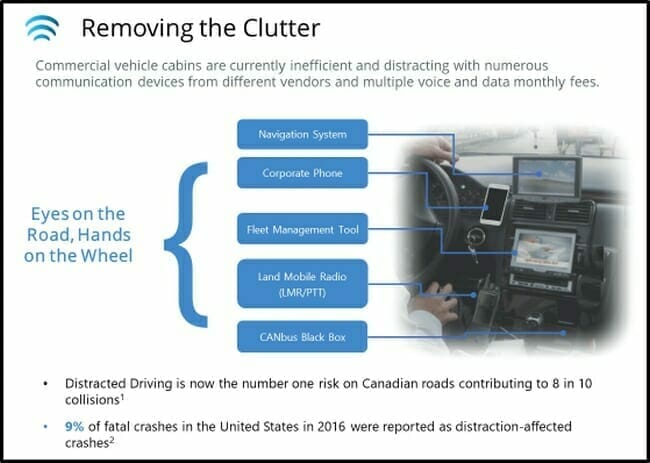 In the same way that the consumer flip-phone market was destroyed by smartphones, conventional two-way radio is about to be obliterated by 4G/LTE Push-to-Talk Over Cellular (“PTT”) hardware.

According to a report by Frost & Sullivan, the number of commercial vehicles with dedicated communications technology will double in the next 2-3 years – with most of the growth coming from North America.

Of the 14 million North American commercial vehicles – 80% belong to small fleets with less than 500 vehicles.

Learn more about the UV350 here:

Siyata’s hardware comes with noise-cancelling software designed to perform inside a semi-trailer, crane a 16-wheeler or a police vehicle with sirens running at 120dbs.

The Uniden UV350 was designed specifically for commercial vehicles.

Siyata’s revenue has increased 300% over the last 5 years.

Take it with a grain of salt.

SIM’s 5-year chart suggests a company that is growing in value. 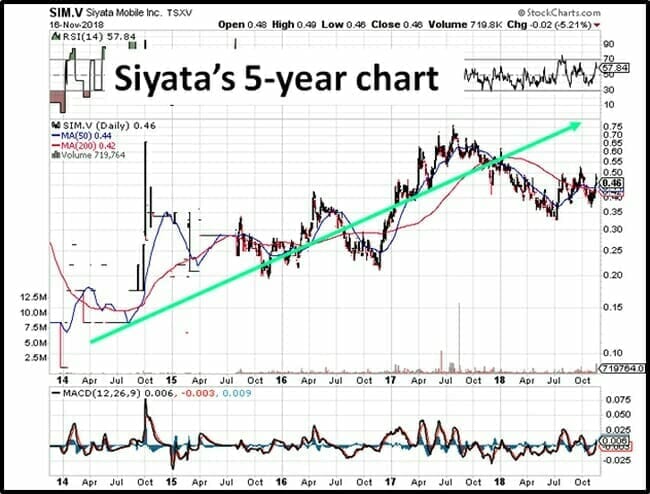 But let’s not kid ourselves: any micro-cap stock can be obliterated by a force much bigger than itself.

Buried in Siyata’s June 30, 2018 Management Discussion and Analysis (MD&A), is the following statement.

Network Certification from any Tier 1 Cellular Operators would radically expand the distribution channels for the UV35O.

Verizon, for instance, has about 150 million subscribers, and 2,300 retail outlets.

Why would a Tier 1 operator want to carry Siyata’s hardware?

Because it allows them to generate revenue from the inside of a vehicle, something they are not doing efficiently now.

But SIM has a track record of delivering on its promises.  Deals with Bill Canada and Motorola were announced – and then consummated.  Given this history, today’s Tier 1 Cellular Operator news should be taken very seriously.

“This  operator agreement in the U.S. covers all the terms and conditions related to the distribution, pricing, logistics, warranty, legal terms and more.”

We think it’s a game-changer.

Full Disclosure:  Neither Equity Guru nor the writer have any financial relationship with Siyata.  In the past, the writer has provided corporate communications services to Siyata’s IR firm. The writer owns Siyata stock.