Thanks to the increasing demand for electric cars, Cypress Development (CYP.V) has formed a new partnership to capitalize on the rising demand for lithium.

They recently entered into a partnership with Dajin Resources (DJI.V) for exploration and development purposes, and to acquire a 50 percent undivided interest in Dajin’s 145 unpatented mining claims and its applications for water rights in the Alkali Spring Valley located in Esmeralda County, Nevada.

Mining.com wrote in June that the demand for lithium–a key component in rechargeable batteries–by tech companies is projected to increase 650 percent by 2027.

This statistic makes joint ventures all the more attractive: junior mining companies, often lacking the capital necessary to dig themselves, frequently turn to larger companies with the capabilities to sample, map and exploit the claim’s resource.

Cypress is an exploration company working on developing the Clayton Valley lithium project in Nevada. Previous exploration has discovered a substantial resource of lithium-bearing claystone next to Albemarle’s (ALB.Z) Silver Peak mine.

Dajin is an early-stage lithium exploration company with interests, concessions or concession applications in the US and Argentina.

Its concessions have been acquired in regions containing brines with lithium, potassium and boron values.

“Cypress is pleased to enter into this definitive agreement and have the opportunity to work with Dajin. Besides exploring for lithium in Alkali Spring Valley, the JV presents potential synergies with Cypress’s Clayton Valley lithium project, particularly with respect to water supply. Cypress recently completed an oversubscribed private placement, which will enable us to complete upcoming milestones for Clayton Valley, including further drilling, metallurgical study and a prefeasibility study, as well as pursue exploration and a water rights application for Alkali Spring Valley with Dajin.”

The deal will cost USD$50,000 and, after TSX Venture Exchange approval, Cypress will issue 150,000 common shares initially and another 150,000 on the first anniversary of the exchange’s approval.

There is a contingency that Cypress must spend at least $450,000 exploring by the second year. When the second period is finished, a joint venture will be created.

This agreement is still subject to exchange approval, and all shares issued will be subject to a hold period of four months and one day.

The first and arguably most important of Dajins’ properties is the Teels Marsh Project which is located 50 miles northwest of Clayton Valley, the home to Albemarle’s Silver Peak Lithium mine.

It covers a surface area of 7,914 acres and consists of 403 placer claims. 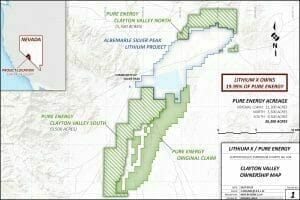 Dajin holds 2,921 acres through 145 placer claims within the Alkali Lake basin. Although positioned only seven miles away, the basin is separate from the Clayton Valley project.

Gravity and magnetic surveys have shown the basin to be in excess of 4,000 feet deep, and of similar geology to Clayton Valley in that it was a classic fault bound closed-basin playa.

Dajin also controls more than 93,000 hectares of lithium brine concessions located in the Jujuy Province of Argentina. This region, commonly known as the Lithium Triangle, is a region historically known for hosting lithium, potassium, and boron brine-based deposits and is home to 80 percent of the world’s lithium supply.