The Beast, an ethanol extraction system developed by Quadron Cannatech (QCC.V), is in its final stage of development.

Upon completion, the beast will be able to process considerable amounts of biomass–meaning oil–for the cannabis industry.

It’s completely automated with a handy touch screen control, and retails for roughly $1.5 million to $2.25 million, so I wouldn’t expect one to show up at your local Walmart anytime soon.

No, not that beast

We are excited about the development of the Beast, the first of its kind in Canada. The Beast is a high-efficiency ethanol extraction system which represents the end result of extensive research and development. The Beast has the capability of providing licensed producers the ability to process extraordinary amounts of biomass per day.

In the past, Quadron expanded their portfolio with the creation of the BOSS –a carbon dioxide cannabis extraction system built to incorporate automation and data analytics into the extraction process.

The future holds the construction of a James Bond-like mobile lab, but instead of death lasers capable of taking ICBM’s out of the sky, they’re going to be extracting and processing cannabis. Other devices will include a biomass dehydration system, a preparation and grinding unit, as well as an advanced filtration system.

We started writing about Quadron back in 2017 and while they’ve taken some lumps along the road, they’re still firing on all cylinders. We expect great things and this is just the latest. 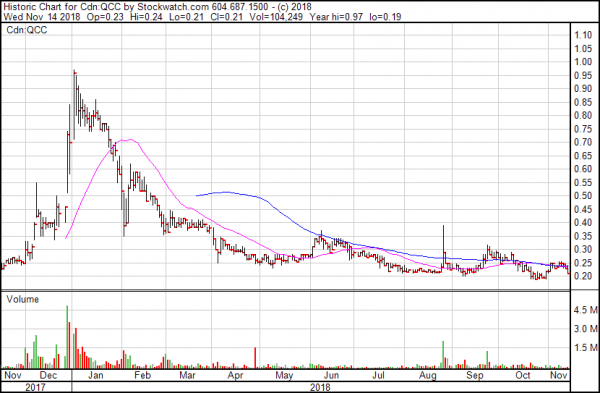 The company has a $16 million market cap and its share price closed at $0.20 today.

Here is the chart for Radient Technologies (RTI.V). Both companies, though vastly different in size, are operating in the same field: cannabis oil extraction. 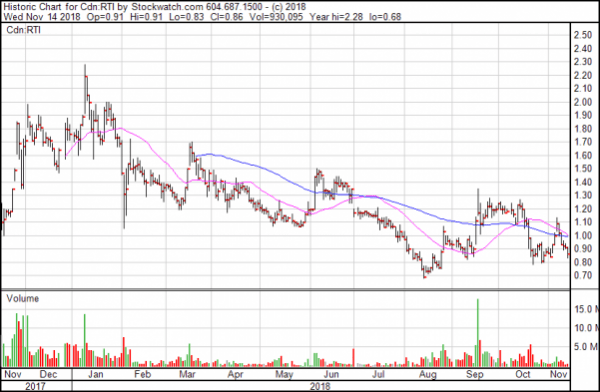 For comparison, Radient has a $240 million market cap and its share price closed at $0.87 today.

Radient is a vertically-integrated multinational corporation with interests beyond cannabis whereas Quadron, like this industry, is still basically in its infancy.

Executive comparisons look similar except for a few holdouts. The top tier of both Quadron Cannatech and Radient executive teams have the usual bevy of lawyers and accountants.

But as one descends, we see Quadron’s scientific credentials make an appearance.

Equity Guru’s own Chris Parry covered CEO Rosie Mondin extensively here calling her the ‘Energizer Lawyer’ for how much passion and energy she injects into the industry.

While Denis Taschuk, the CEO of Radient, has previous experience as a CEO at the helm of JAG Flocomponents, which manufactured industrial valves on an international level.

Another point of comparison are the two strategic partnerships of the two firms.

Quadron’s partnership  with Lucid Labs, a technology and licensing company based in Washington State, assists in the development and commercialization of extraction and processing solutions.

It’s a valuable partnership in that Lucid is already a player in the game, and is willing to split the costs in research and development of new processing and extraction equipment.

On the other side of the divide, the partnership between Radient and Aurora shows similar functions as Radient has agreed to perform development, commercialization and supply related services for Aurora.

This agreement will last five years and offer up the opportunity for Aurora to extend it further after the time is up.

The Beast displays Quadron Cannatech’s undeniable promise, and if they continue with innovative devices like this one, then there’s no reason why they shouldn’t attract more lucrative partnerships in the future.