Quadron Cannatech (QCC.C) partners up for the great weed rush of 2017 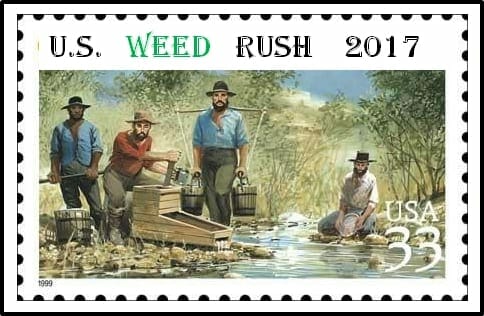 The 1848 California gold rush is often cited as the original “picks & shovels” investment boom – where the biggest profits were made – not by the gold miners – but by companies selling rope, pans and digging tools.

On August 1, 2017, Quadron announced that it had signed a letter of intent (L.O.I) with Lucid Labs – a Washington-based tech and licensing company to develop and commercialize extraction and processing solutions. Lucid Lab’s love-child, “Lucid Oils” has developed successful commercial products. 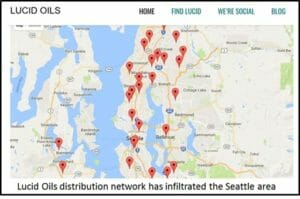 2. Sales of equipment will be a revenue share between Lucid & Quadron. Quadron will acquire Lucid Lab’s interest in the technology based on an agreed profit multiple. The purchase price will be paid by issuing shares of Quadron to Lucid Labs. 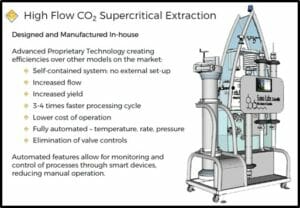 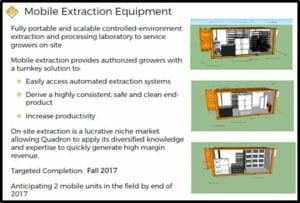 4. Lucid Labs is already a player in the cannabis space. This may seem blindingly obvious but the space is so new and giddy that many technology deals are being struck with mainstream manufacturers that have no weed experience.

“Lucid Labs is an excellent strategic partner with a well-established footprint in the Western United States,” stated CEO and President of Quadron, Rosy Mondin. “We are excited to expand our revenue base into the growing U.S. market.”

QCC has also developed ancillary products like miniaturized vape pens – which are turning out to be a hit with cannabis consumers who require discretion. Instead of taking a break to roll a joint, you can steal 30 seconds to puff on a vape pen.

While the US Cannabis Market is growing exponentially, the growth rate is not dispersed evenly over the entire sector.

In Washington State for instance, the sales of cannabis concentrate have grown to over $140 million in just two and half years (compared to $3.4 M sold in the first year). 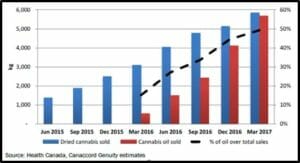 “Cannabis oil consumption is estimated to grow 100X times faster than dried marijuana consumption,” confirmed Mondin, “Many cannabis growers do not have the equipment or expertise to deliver a highly consistent, branded, end product to their customers leaving a critical void in the market which Quadron aims to capture.”

According to Investopedia, a ‘Pick & Shovels Play’ is “a strategy where investments are made in companies that are providers of necessary equipment for an industry, rather than in the industry’s end product.”

In 1853, one entrepreneur arrived at the California gold fields and observed that the miners were wearing flimsy ripped pants.   Instead of panning for gold, he stitched a pair of pants out of canvas.  The miners loved the sturdy workwear. The entrepreneur’s name: Levi Strauss (now a $3 billion per year jeans company).

Full Disclosure:  Quadron Cannatech is an Equity Guru client.  We like the business model, the products and the partnerships.