Can you extract CBD from it?

Why should I care about AAZ’s lithium project?

The short answer is: because no-one else does – yet – and this is always the most profitable entry point – to a stock – or a sector.

There is no international exchange for lithium.  Typically, buyers negotiate with producers – often for long term supply contracts.  The lithium carbonate price has softened recently, but is still around $16,000 a tonne – up 280% in the last three years. 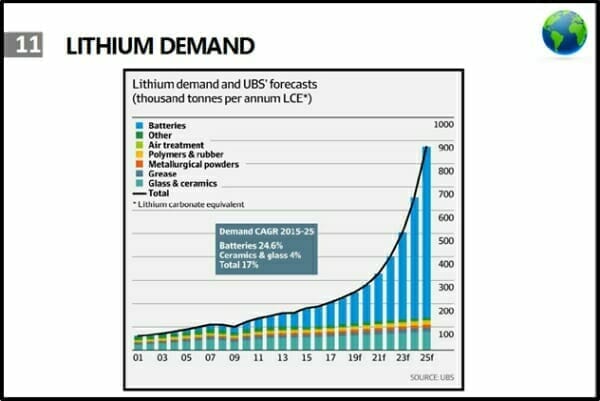 Azincourt is focused on the strategic acquisition, exploration and development of alternative energy/fuel projects.

This includes uranium, lithium, and other critical clean energy elements.

Azincourt currently also has three uranium projects. It carries 10% of the Fission 3.0 Patterson Lake North project.  A JV with Skyharbour Resources, the 25,000+ ha East Preston Project in the Athabasca Basin, Saskatchewan. It has also begun a work program at a uranium-lithium exploration project in southeastern Peru.

Any one of these uranium projects could be spun-off into a separate investment vehicle.  In a recent article, Equity Guru’s Greg Nolan examined AAZ’s uranium assets.

In the video below, the President and CEO Alex Klenman, gives an excellent multi-project overview of AAZ.

We love Saskatchewan (where the term “hoser” was coined to describe a person who syphons gas from farm equipment) and Peru (home to 3,000 varieties of potato).

But today’s field trip will be constrained to South Eastern Manitoba.

AAZ just struck a deal with The Sagkeeng First Nation, providing a clear path to the proposed drill programs at the Lithium One and Lithium Two projects in Manitoba.

If you’ve ever lived on a street where the neighbors don’t like you, you’ll realise how critical the blessing of The Sagkeeng Nation is to the AAZ’s Manitoba objectives.

Sagkeeng First Nation is located 120 kilometers north of the City of Winnipeg, straddling the shores of the Winnipeg River.  It selects its Chief and council through the Indian Act Election process.

The agreement is designed to promote a cooperative and mutually respectful relationship and ensure that Sagkeeng has been properly consulted and accommodated regarding mineral exploration activities undertaken in Sagkeeng’s traditional territory.

“This is a major step toward developing our lithium projects,” stated Klenman, “We’re happy to move forward completing our work commitments for year one of the JV agreement.”

There are eight projects totaling over 14,000 hectares in three distinct areas that comprise the AAZ-NAM joint venture lithium exploration and development agreement.

The October 30, 2018 results were from the Lithium Two project. 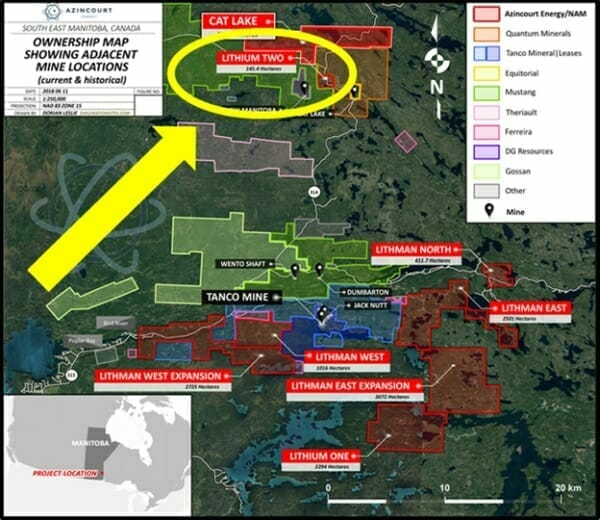 Channel samples obtained during the phase two program at the Eagle Pegmatite returned values from 0.12 to 3.8% Li2O (Lithium Oxide).

Phase two surface reconnaissance and detailed mapping of the western extension as revealed up to 300m of additional outcropping of the Eagle Pegmatite. 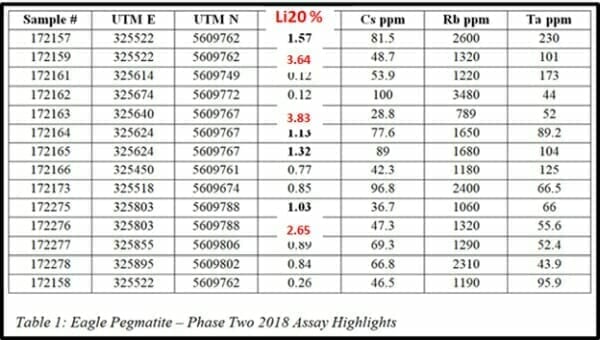 The next phase of drilling will focus on both the Eagle and FD5 Pegmatites at the Lithium Two project.  Government of Manitoba permits are expected in the coming weeks.

“The lithium values obtained at both the Eagle and FD5 Pegmatites over the summer and fall are significant,” stated Klenman, who believes the new data makes a compelling case to supports the potential of the historical resource, while also creating a more targeted drill program.

AAZ is a micro-cap explorer with a market cap of $5.1 million.

That’s not for everybody.

But with geologically robust clean-energy projects in Saskatchewan, Manitoba and Peru – AAZ offers a ridiculous amount of upside for a penny stock. 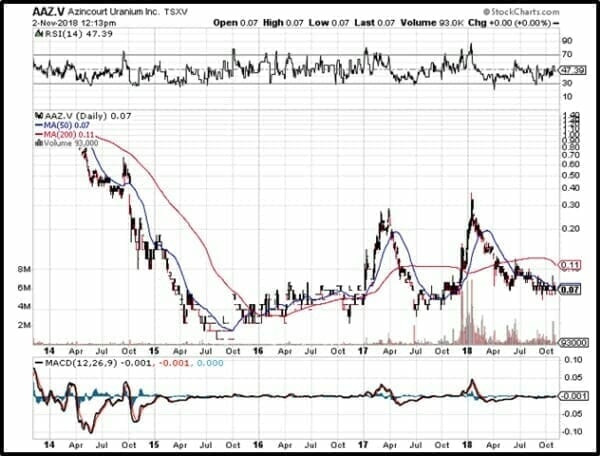 “With the Exploration Agreement now signed with the Sagkeeng First Nation, we’re excited to get to the next phase of exploration and drill test these targets,” stated Klenman.

With eight projects totalling over 14,000 hectares containing hundreds of pegmatites, the Azincourt-New Age JV is the largest claim holder for Lithium Projects in the area.

Full Disclosure: AAZ is an Equity Guru marketing client, and we own stock.