Question: Where is uranium going in the short to medium term?

Answer: “I don’t know if uranium is going to run hot any time soon, but I wouldn’t bet against it.”

Opinions vary, but there are reasons for optimism.

The price of U308 is firm. It continues to stair-step higher. We haven’t witnessed any violent spikes yet – not the type of price chart trajectory that’ll bring on gut wrenching g-forces…

But we’re in the early stages of price recovery. Things could get interesting in the weeks and months to come.

447 nuclear reactors are currently in operation worldwide. There are 59 under construction, 170 planned, and 372 proposed.

These new plants are going to need heaps of yellow cake.

The U308 market has been in a state of oversupply for years. Producers worldwide have been, for the most part, operating at a loss.

In order to restore balance, large producers, like Canada’s Cameco (TSX.CCO) and Kazakhstan’s state-owned miner Kazatomprom, began making significant cuts to production months ago. Others, like Paladin Energy, cancelled expansion plans or mothballed projects outright. This helped put a bid under the sector.

Something I find particularly interesting: Kazatomprom recently bypassed the spot U308 market and sold a chunky portion of its annual output to Yellow Cake plc, a London listed investment fund:

Obviously, this was an opportunistic move by Yellow Cake. They see higher U308 prices on the horizon.

Adding validity to the argument for higher U308 prices, countries with aggressive nuclear power agendas are busy locking down subsurface supply.

Rio Tinto in talks to sell Rössing to China

The ‘Nuclear Intelligence Weekly’ last week suggested that if talks are successful, CNNC will acquire its largest overseas uranium asset, and would see complete Chinese control of Namibia’s active uranium production, with China General Nuclear’s (CGN) Husab mine already next to Rössing.

China wants more than its current 69% share in Rössing, a mine that ranks in the Top Ten globally…

I hate highlighting any legislation signed by the Trump administration, but this is worth taking note of if you need further convincing that U308 is for real:

“There are some truly transformative advanced nuclear technologies being developed in America right now, and this bill just reinforces this administration’s continued efforts to revitalize the nuclear industry,” said Ed McGinnis, principal deputy assistant secretary for the Office of Nuclear Energy, in a statement.

There are a number of good articles to peruse on the subject. This one from Mining.com is short, sweet, and it hits the nail on the head:

Uranium supply crunch may be just around the corner — experts

One more chart. This speaks volumes… 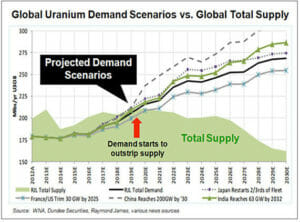 You can see why investment funds like Yellow Cake are eager to nail down and vault further supply.

We like junior U308 exploration companies here at Equity Guru, particularly those with the right address.

Azincourt Energy (AAZ.V) is an exploration and development company focused on the alternative fuels~alternative energy sector.

It has two advanced uranium exploration projects in the prolific Athabasca Basin of Saskatchewan, Canada.

What Wall Street is to the financial markets, the Athabasca Basin is to the U308 sector.

The Basin is best known for its high-grade deposits and currently supplies about 20% of the world’s uranium.

The East Preston Project is located in the western part of the Athabasca Basin. The prospectivity of the area is highlighted by recent discoveries made by NexGen Energy (Arrow) , Fission Uranium (Triple R), and a joint venture consisting of Cameco Corp., Areva Resources Canada Inc. and Purepoint Uranium Group Inc. (Spitfire). 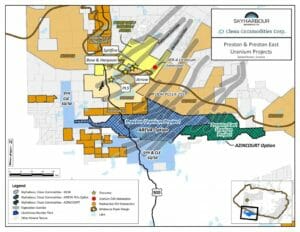 Highlights of the entire Preston Project include (from the Azincourt website):

Next month the company is planning a 2000-2500 meter drilling program at East Preston to test several high-priority targets.

To date Azincourt has spent $3.1M earning into PLN, primarily on targeting geophysics and diamond drilling. Prior to Azincourt’s involvement, Fission spent ~$4.7M on exploration on PLN ranging from airborne to ground geophysics to a first-pass drilling of a few select targets. There are three separate target areas that are drill-ready. The first uranium mineralization was intersected on the central conductor system during summer 2014 drilling and follow up is necessary. The N and Broach Lake conductor systems in the north and south project area, respectively, are highly prospective targets that have yet to see drill testing.

Azincourt has a number of prospective irons in the fire outside of the Athabasca Basin. 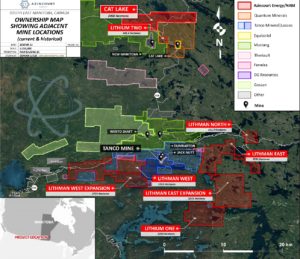 Azincourt’s Li projects share the same area code as Equitorial Exploration (EXX.V), a company covered here by our own Lukas Kane, and yours truly.

I look forward to probing Azincourt’s lithium potential further. There’s a lot to talk about here.

Azincourt is a busy exploration company with a number of prospective projects in the energy metals arena.

The company, led by Alex Klenman, President, CEO & Director, appears to be in very competent hands.

Mobilization of a drill rig to their East Preston Project in the Athabasca Basin is one of several potential catalysts short-term.

Earlier, I was talking about the current state of U308 and how we haven’t seen any real violence on the price chart. Note the price highs reached back in 2007… 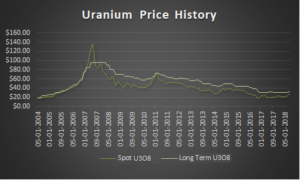 I was around when the price of U308 exploded. The impact on the junior exploration sector was nothing short of epic.

FULL DISCLOSURE: Azincourt is an Equity Guru client, as is Equitorial Exploration. We own shares in both.