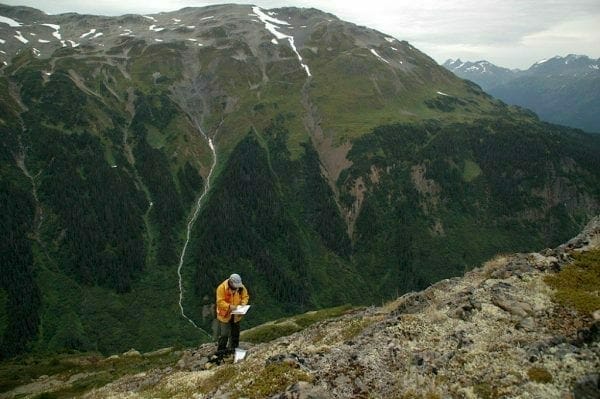 When Aben Resources (ABN.V) dropped news of its North Boundary Zone discovery at its Forrest Kerr Project on August 9th, a drill hole discovery which included an interval of 62.4 g/t gold over 6.0 meters, it lit up the junior gold exploration arena with the intensity of a major headlining act. 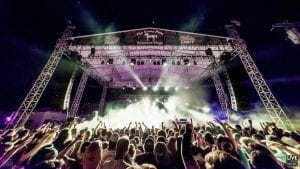 image courtesy of Live For Music

Now, it would appear that Aben’s early August discovery – Hole FK18-10 – may only be scratching the surface at Forrest Kerr.

In a recent Equity Guru article, we talked about the presence of a gold and copper anomaly which extends 2 kilometers southward…

This is an exciting development. Truly exciting. A discovery 1.5 kilometers away from a known high-grade zone opens up Forrest Kerr’s potential… the potential for multiple mineralized zones.

This new discovery of mineralization 1.5km south of the North Boundary Zone is a major development for the Company and further highlights the robust discovery potential at the Forrest Kerr Project. The mineralizing system at the property is apparently widespread and well-developed with high-grade mineralization being discovered at shallow depths over a large area. We believe we have only just scratched the surface at the newly discovered North and South Boundary Zones and an expanded drill program is currently underway with assays pending for most of the holes drilled to date.

Aben has completed 4,850 meters of drilling in 16 holes at Forrest Kerr so far this season. Aside from pending assays from 3 holes at this new discovery zone 1.5 kilometers to the south, 12 holes are pending for the North Boundary Zone. That represents a fair volume of incoming assay data. 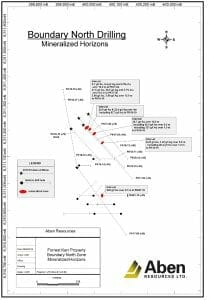 In a recent article, we discussed the importance of the Kyba Red Line, the geologic contact between the regions Triassic age Stuhini rocks and Jurassic age Hazelton rocks, and how they play host to many of the world-class copper-gold deposits in the Golden Triangle. We also emphasized how the majority of the Golden Triangle’s most significant ore bodies lie within two kilometers of this key stratigraphic contact point.

Let’s take another look at the map featured above. Note the scale. Note the location of both Boundary zones – North and South – relative this Golden Triangle sweet spot… they’re barely a kilometer away.

Mineralization at North Boundary is structurally controlled and hosted in a package of volcanic and volcaniclastic rocks from the Jurassic Hazelton Group. Several generations of quartz and quartz-carbonate veining are important hosts to mineralization, as are subordinate breccia zones with strong chlorite, hematite and carbonate alteration. The Boundary Zone lies between the Forrest Kerr Fault to the west, a major deep-seated crustal feature, and the unconformable contact between the Jurassic Hazelton Group and the Triassic Stuhini Group to the East. The rock reflects a prolonged history of strong hydrothermal activity combined with brittle deformation. The host package Hazelton is known to be a prolific host to several deposits throughout the region.

Cashed up with a strategic raise…

Exploration, drilling in particular, costs money. On August 21st the company closed a PP (Private Placement) for $4.28 million. The lead on this PP was Eric Sprott.

I used the word ‘strategic’ in characterizing this raise. Eric Sprott is regarded as ‘Smart Money’. Guys like Sprott might also be referred to as ‘Strong Hands’… strong due to the fact that they’re less twitchy than the average investor. They’re less impulsive. They’re more likely to maintain a firm grip on their position.

News of a new discovery at Forrest Kerr is music to this humble observers ears. It highlights the (potential) pervasive nature of the areas mineralization. It adds an element of mystery, drama, intrigue.

There’s plenty of assay news coming down the pike. An expanded drill program is bound to push ABN newsflow right into the winter months.

The company has roughly 100.8 million shares outstanding giving it a current market-cap of approximately $43.3 million.

No one has a crystal ball. Geology is difficult to augur. But if Aben continues to hit at Forrest Kerr, their current (modest) $43M market-cap will be a thing of the past.

FULL DISCLOSURE: Aben Resources is an Equity Guru client. We own shares.