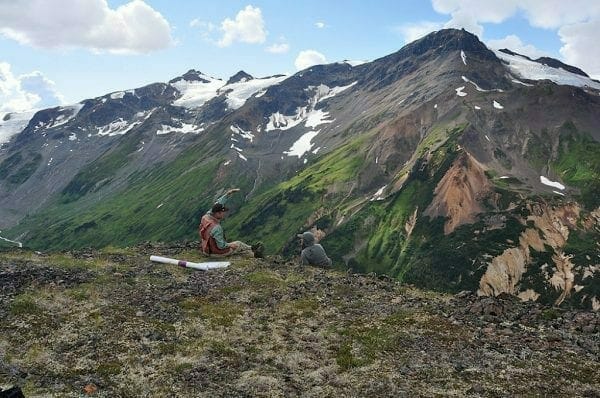 Aben Resources (ABN.V) made a nice discovery recently. It’s property, the Forrest Kerr Project, is nestled in the heart of BC’s Golden Triangle, a mountainous region that is at once beautiful and forbidding. It’s rugged landscape, a concealer of unimaginable measures of mineral wealth, gives up its riches to only the most stealthy, determined and intrepid of prospector. 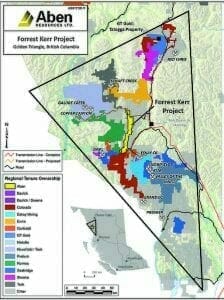 As you can see by the crossed pick ax symbols in the above claims map, there’s been an abundance of significant discoveries made over the years, some of which are best categorized as colossal, many of which turned into major mines.

A brief history on some of the more significant Golden Triangle discoveries is in order. There’s real romance here. There’s mystery and intrigue too…

The first significant discovery was the Premier Mine – south of Aben’s Forrest Kerr project – which began mining GoldenTriangle rock back in 1918. Hailed as one of THE greatest gold and silver mines on the entire planet in its day, it really came into its own during the Great Depression.

At a time when the continent was on its knees, ravaged by economic collapse and ruin, the tiny hamlet of Stewart BC prospered. 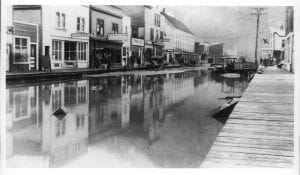 image courtesy of District Of Stewart

When most of North America couldn’t find even a few hours worth of honest pay, workers at the Premier Mine were inundated with overtime.

There were no roads leading into Stewart back then. Boasting Canada’s most northerly ice-free harbor, the sea was its only link to the rest of the world.

Without proper road access, the Premier Mine operators constructed an 18 kilometer tram from the minesite to the port at Stewart. 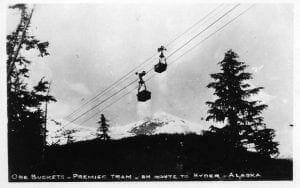 image courtesy of District Of Stewart

Strung along the rugged terrain, at heights often exceeding 100 meters above ground, the Premier tram carried buckets of gold concentrate to waiting ships in the harbor. From there it was taken south for refining.

Years after the high-grade underground ore was mined out, the lower grade disseminated gold and silver was targetted. Those open pit operations drew to a close shortly after they began. 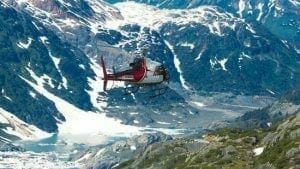 The Snip Gold Mine lies just west of Aben’s Forrest Kerr Project. Discovered in 1964, it didn’t become active until 1987 when it was drilled off by a joint venture with Delaware Resources, run by Aben’s Ron Netolitzky. Murray Pezim, aka ‘The Pez’ – a name you’ll hear more about further on – took over Delaware with his Prime Resources after the stock ran from $1.00 to over $20.00. Netolitzky cashed out his 35-cent shares to the Pez for $20.00 per share. 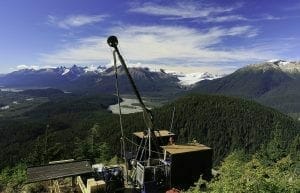 The Eskay Creek minesite lies to the east of Forrest Kerr. This is the discovery that lit up the Vancouver Stock Exchange the 4th of July. There’s a rich history to this discovery. It’s a good story, one worth fleshing out.

The romance behind Eskay…

Spotting a spectacular outcrop from the air, Tom Mackay staked the Eskay Creek property in 1932. “This will become one of the greatest mines in BC”, he was oft heard to say. 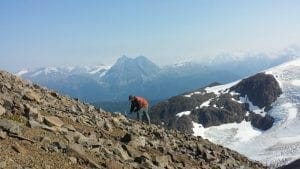 A boulder on the property containing an impressive 5 ounces of gold firmed MacKay’s resolve, prompting him to drill the immediate area of the find. What he didn’t realize at the time was that the gold-rich boulder had broken free from its source, rolling over a dozen meters down a slope. “They were so close they could taste it”, Netolitzky would later be heard to say.

Throughout the years and decades, several drilling campaigns were launched on MacKay’s property, all without success.

Tom MacKay worked the property for over half a century. He died attempting to make that major discovery. Mackay’s wife, Marguerite, hung onto her late husbands legacy, taking over control of his company, Consolidated Stikine Resources.

Marguerite struggled to maintain control of Consolidated Stikine. Funds were low. Her board of directors were aged and lacked the skillsets of the younger prospectors. There are even stories of how she thwarted attempts by riff raff promoters wanting to take over the company as a clean VSE listed shell.

Her days of maintaining control of the company were numbered. Desperate, out of funds, her 200,000 Consolidated Stikine shares virtually worthless, in early 1988 she turned to John Toffman and Ron Netolitzsky, who in turn brought Murray Pezim on board to help move the project forward.

Toffman, Netolitzsky and the widow MacKay’s Consolidated Stikine had a joint venture partner in Calpine Resources, a 50/50 deal.

Shortly after they began to drill the property in the Fall of 1989, they hit paydirt.

Calpine shares, which had sunk to a low of six cents, jumped to $1.67 after the discovery was made public.

Inspired by initial results, Calpine, the operator of the joint venture, tore up their exploration budget and resolved to drill right on through the brutal northern BC winter.

By the Spring of 1990 they had 70 holes drilled, stepping out 50 meters at a time, each hole better than the last.

Later that summer, after drilling a total of 108 holes, they hit a fault. The orebody disappeared. Its location had shifted somewhere else along the mountain. Chet Idziszek, Pezim’s extremely talented and gifted onsite geologist, was stumped. He had no idea where to drag the drill rig next. None. All he could do was guess.

After studying his maps and walking the steep terrain, Idziszek settled on a spot 350 meters away from his last drilled hole. That’s where he sunk hole 109.

Hole 109 goes down in history as one of the true greats, a genuine monster: 27.2 grams per ton gold and 30.2 grams per ton silver over 208 meters. There would’ve been a mic drop back then had there was such a thing.

That hole caused so much commotion, it triggered a wave of claim jumping which forced BC’s chief gold commissioner to invoke a staking freeze until the disputes – some of which were seven deep – could be sorted out.

The VSE became a madhouse. Howe Street brokers’ were pushed to the brink of physical and mental exhaustion as a tsunami of buy orders poured in.

In an earlier article, I confessed…

My Adrian Resources, a Pezim controlled company and Eskay area player, went from a quarter to over $11.00 per share.

My Canarc Resources, another Eskay area player, went from $0.50 to over $4.00 per share. I believe I may have received the all-time high trade in that stock, quite by accident: my treeplanting crew was snowed-out early one morning in the spring of 1990. While waiting for the ground to open up in the nearby town of Nakusp BC, I called my broker – there was no such thing as online trading back then – and instructed him to sell my Canarc shares ‘at market’. I received $4.90 for that littlebit of business, if memory serves.

In the end, after a bitter, convoluted and avaricious struggle for control of Eskay’s riches, Toffman and Netolitszky walked away fabulously wealthy men. Marguerite Mackay, whose husband spent most of his life searching in vein for the source of that gold-rich boulder, received $70.00 for each one of her 200,000 Consolidated Stikine shares – shares which were virtually worthless only two summers earlier. 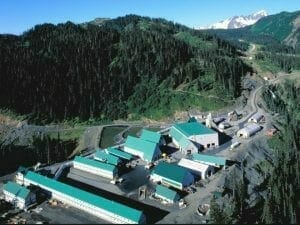 image courtesy of the Vancouver Sun

Seriously, how can a person not get romantic about the gold exploration game?

The Eskay Creek area is once again being probed for its gold potential. Ron Netolitzky’s Skeena Resources has the immediate area around Snip and Eskay Creek locked up. Eskay Mining and their joint venture partner, SSR Mining Inc, are working the ground nearby.

Other mines and deposits in the Golden Triangle…

To the south of Forrest Kerr, Seabridge Gold’s KSM Project, a quartet of deposits once know as Kerr, Sulphurets, Michell and Iron Cap, are host to one of the planets largest undeveloped resources – 98.1 million ounces of gold in the measured, indicated and inferred categories (the deposits also contain massive copper and silver values) 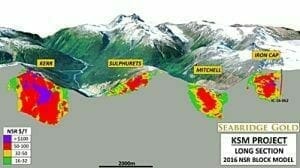 Further to the south of Forrest Kerr, the Brucejack Property (The Valley of Kings), once controlled by ‘A Lucky Man‘ Donald McLeod – a hero of mine – is now being mined by Pretium Resources. Though the mine has wrestled with grade control issues in the past, the deposit now appears to be giving up the goods, boasting high-grade reserves of 8.7 million ounces. 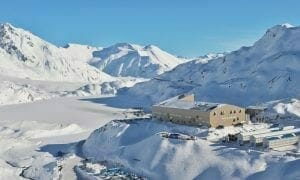 To the northwest of ABEN’s Forrest Kerr Project lies Galore Creek with its 8 million oz’s of gold, 136 million oz’s of silver, and 9 billion pounds of copper resource. Galore Creek is a joint venture between NovaGold and Teck Corp (Novagold recently announced the sale of its 50% stake in Galore Creek to Newmont Mining) 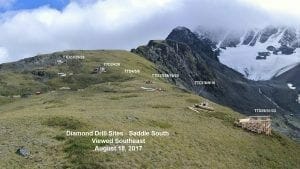 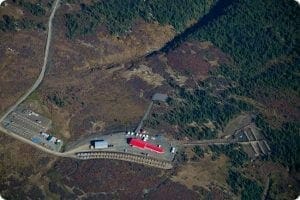 Aside from my propensity to tell stories, you can sense a theme developing here, can’t you? And this isn’t even a complete list. Not even close.

Aben Resources is sitting right smack dab in the middle of elephant… no, make that MONSTER country (take another close look at the claims map at the top of the page).

During a conference call with ABEN management, Equity Guru learned that there are at least 20 drill rigs currently turning in the area. That’s a fair amount of activity, a fair amount of excitement.

Enhanced, more sophisticated mineral detection technologies, fresh geological models for the structural engines that control mineralization in the Triangle, new roads pushing deep into what was once untamable terrain, receding glaciers – a corollary of global warming (exposing surface mineralization which lay hidden under meters of ice, until now)… all of these factors increase the odds for new discoveries in the region.

Aben has seven additional holes coming, more drill core on the way to the lab, and the resolve to accelerate this year’s exploration program at Forrest Kerr.

From the August 9th news release…

With drilling currently ongoing, final geochemical assays results for seven completed holes are still pending and the Company will look to expand the scope of the program given the results from the first hole and visual indicators in the other holes.

Aben could be sitting on top of something significant. The drama will continue to play out in the weeks and months to come.

FULL DISCLOSURE: Aben Resources is an Equity Guru client, we own the stock.