Cabral Gold is in the vein at Cuiú Cuiú

This week, Cabral Gold (CBR.V) announced results from sampling of the unexpected discovery of stockwork-style, gold mineralization during its current exploration for drill targets in Brazil.

The company announced in March that artisanal miners at the Vila Rica discovery, part of the larger Cuiú Cuiú project, identified the stockwork mineralization beneath alluvial cover being mined for placer gold. The cover sequence is young and unconsolidated, consisting of lake-clays, channel sands and gravels. Alluvial gold contained in the cover sequence makes it difficult to conduct useful soil geochemistry in this enormous system. The stockwork vein systems in the bedrock underneath the cover must have been a welcome sight to project geologists, who are no doubt also pleased with how these chip samples turned out. 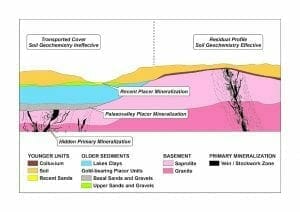 “The Vila Rica program has given us our first indication of just how extensive the transported cover sequence is at Cuiú Cuiú, and the potential for this cover to conceal vein and stockwork style gold mineralization,” said Alan Carter, president & CEO of Cabral Gold..

This ongoing program is the first phase of a planned two-phase exploration program at Cuiú Cuiú. It’s expected to take two years. Phase one should conclude in an update of the 43-101 resource estimate. The “aggressive program of soil sampling, channel sampling and surface trenching” over seven of the company’s high-priority targets appears to be going well so far.

These new, bedrock-hosted stockwork veins will make fine targets for phase two, which is to include to a diamond drill program of up to 8,000 meters.

Equity Guru’s Greg Nolan wrote in June that Cabral Gold’s CEO, Alan Carter, was being meticulous in assessing and defining the highest-value drill targets. In his opinion, Carter’s embrace of artisinal mining as an exploration tool is the right approach to uncovering the kinds of precious metals which drew exploration companies to this corner of Brazil from across the world in the late 20th century.

We noted in an earlier article how Cabral has embraced the artisanal mining culture in the area, rather than attempting to run it off. Input from these garimpeiro’s helped to inform Cabral’s understanding of the underlying geological controls at Cuiu Cuiu. They’re helping the company connect the dots. There’s been no let-up in this strategy. There are currently TEN artisanal shafts in production, or in the process of being explored, at Morro da Lua, with many others scattered about the area having been recently worked and abandoned. ‘Cool Beans’ says this humble observer.

He goes on to reiterate how the Cuiú Cuiú, project is a lucrative piece of real estate, given the neighborhood’s historical profitability: the gold is there, the only question is the feasibility of extraction.

More likely than not, Cabral Gold is hoping to continue the successes of a district which is estimated to have produced 20-30 million ounces of gold in the late 20th century.

The work necessary for environmental approval has been budgeted as part of the two phase program.

The combined production of both the Palito and Sao Chico orebodies resulted in approximately 39,669 tonnes of ore being extracted in Q1 2018. 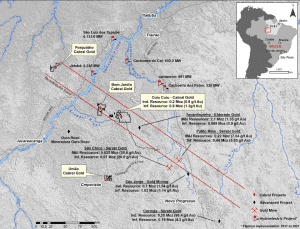 Serabi Gold (TSX:SBI) has a market cap of $55 million, and regional operator Eldorado trades at a $1.1B market cap. Cabral Gold closed Friday with a $6.2 million market cap.