Cashed-up Nexus Gold (NXS.V) fires up the drills in Africa

Scott Nations, the creator of VolDexo Option Implied Volatility (VOLI.NASDAQ), just announced that he is “buying gold for the first time since the election”.

We remain convinced that paper currency devaluation through global money-printing is the strongest gold price catalyst.

However, the future price of gold (short and long-term) is – to paraphrase former U.S Defense Secretary Donald Rumsfeld, a “known unknown”.

For reasons previously stated, we believe in gold.  RSI numbers aside – the junior Au sector is beaten down – presenting us with golden buying opportunities.

Case in point: on June 21, 2018 Nexus Gold (NXS.V) announced that is has begun a 4,000-meter reverse circulation (RC) drill program at its three Burkina Faso projects. 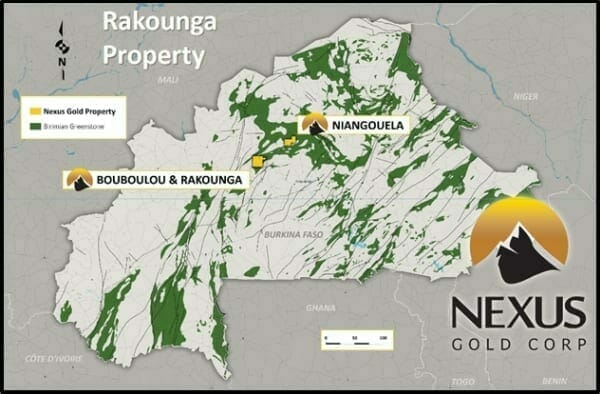 So the company is cashed up for the RC drill program.

Nexus’ summer drill program will consist of about 2,000 meters of RC drilling at Rakounga and 1,000 meters each on the Bouboulou and Niangouela.

Niangouela: test a newly found orpaillage occurring three kilometers to the northeast of the primary quartz vein system drilled in January of 2017.

Rakounga: test the strike extension of the Koaltenga zone, which to date has returned intercepts of 32 meters averaging 1.01 grams per

“One of the primary goals of these programs is to increase the size of the overall mineralized footprint while generating data to help establish the nature of the proximal relationship of the known gold zones,” stated president & CEO, Alex Klenman, “Niangouela is an earlier stage project, but the high-grade discovery we made there last year makes this a compelling project to pursue.”

On June 14, 2018, NXS initiated a 105-line kilometer geochemical survey on the Rakounga permit.

The survey is designed to aid in identifying gold mineralization which may occur in the nine-kilometer gap between the Koala and Bouboulou Gold Concession, and the Koaltenga showing.

Prior drilling by the Company at Koala returned several intercepts of note, including 5.21 grams-per-tonne gold over 3.05 meters.

The survey will cover the area underlain by the Sabce fault zone, a prominent structural feature which extends some 200 kilometers. 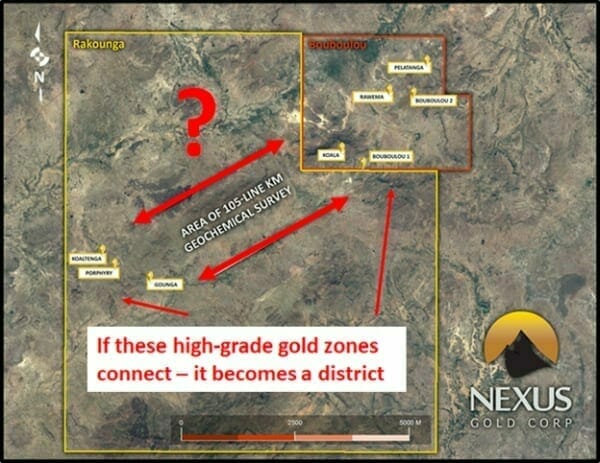 “The area we’re covering has the potential to significantly expand the mineralized footprint,” stated Klenman, “Ultimately, we are looking at this project to produce a resource estimate and the data generated by this survey will move us closer to that goal.” 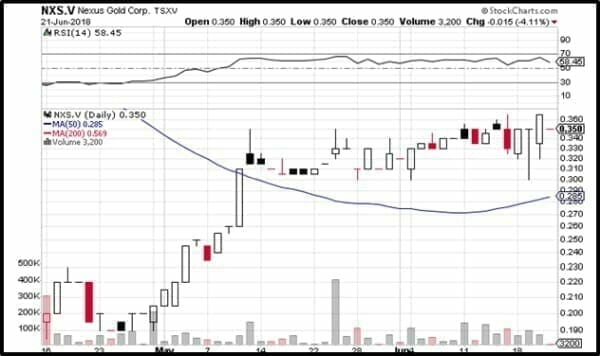 RSI is a momentum indicator.  RSI values of 70 or above indicate that a security is overbought; RSI values below 30 indicate an oversold equity.

We would not recommend purchasing gold equities because of RSI numbers, dollar strength index, political tensions or inflation.

Gold is not everyone’s cup of tea.

Dallas Mavericks‘ owner Mark Cuban compared it to a pet rock, and stated, “I hate gold with an extreme prejudice.”

But if you want exposure to gold, take note:  there’s a tiny company drilling for gold in Africa; someone’s loading up on it at a time when companies normally experience a sell-off.

Full Disclosure:  Nexus Gold is an Equity Guru marketing client and we own stock.