Sometimes when expectations are elevated, actual news can disappoint…. not in this case!  The plan was to punch down to 500 m, but drilling difficulties ended the hole at 387 m.  Importantly, Esperanza remains open at depth and in all directions.

Mineralization was excellent through the top 166 m.  On May 8th, Centenera put out the full drill hole assay, covering 387 m (from surface).  Before jumping into the details, let me put into perspective historical work that Centenera has access to.

Prior drilling returned the following highlights:

These are solid numbers, the best interval was 88 m, weighing in at 0.69% Copper (“Cu”) Equivalent (“Eq.”).  The goal with this year’s drilling is to find more results like these through prudent step-out drilling.  When exploring porphyry targets, one needs to find both wide intervals — 100+ meters, plus high-grade — say 0.60%-1.00% Cu Eq.

Having said that, the depth of a porphyry target matters a lot.  All else equal, near-surface deposits can be viable at lower grades because pre-stripping (mining waste rock, or overburden, to reach an orebody) is expensive and time consuming.  That’s why this first full assay from Centenera’s 2018 drill program is so exciting; a wide interval, plus strong grade, plus continuous mineralization from surface.

Drill hole 18-ESP-025 collared in mineralization that continued to the bottom of the hole at 387 m (hole abandoned due to drilling difficulties).  Mineralization remains open at depth.

There is a number of porphyry exploration and development projects around the world with 0.30%-0.40% Cu Eq. orebodies.  The lower the grade, the smaller the margin for error and greater the need for abundant size.  Centenera’s May 8th announcement places it well on its way to establishing economic grade.  It’s a matter of finding a large-scale deposit.  A surface expression of 1,400 x 850 meters is a good start. 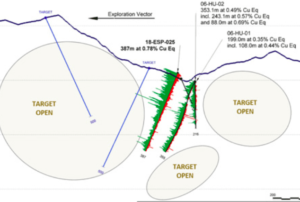 East-west cross section showing complete results from 18-ESP-025 and a few previous drill holes.  The exploration vector to higher grade Cu & Au is interpreted to be west, where 2 targets are highlighted.  All drill holes are open at depth, and there’s significant untested ground to the west & east.  Green = Cu grade / Red = Au grade.

By large-scale I mean > 3 billion pounds Cu Eq.  This year’s drilling is testing bulk tonnage potential.  The Company might not be able to identify multi-billions of pounds in a maiden resource estimate, but perhaps management can do so over time.

According to the Company, drill hole #: 18-ESP-025 would have ranked #3 among top global Cu intersections drilled in q1 2018.  Drill intersections ranked by [the Cu portion only, multiplied by interval width (in meters)].  Despite a very promising Cu-Au project, and several other projects / properties in Argentina, Centenera’s market cap remains fairly low at just C$10.2 M / US$ 7.9 M.  Shares are at C$0.14.

The above ranking is of projects where Cu is the primary metal and does not take into account other commodity credits.  For example, Esperanza has meaningful gold credits that are not included.  In addition to being at surface, (vs. an avg. depth to top of interval of 437 m) the Esperanza project is in a top mining province in Argentina, the single best province — San Juan — (as per latest annual Fraser Institute of Mining).

A 0.40% Cu Eq. NI 43-101 compliant resource estimate would mark a robust outcome.  Although there’s limited evidence of large scale to date, management’s goal is to find at least 500 million tonnes of mineralization (by no means a sure thing).  500 million tonnes at a grade of 0.40% would equate to nearly 4.5 billion Cu Eq. pounds.   Management’s stated goal for its projects is to, “drill, add value and advance to JV or sale.”

I expanded the chart from a prior article about Centenera Mining to include higher grades along the left side. This does not mean I believe that the overall mineralized grade will be up to 0.70%-0.75% Cu Eq., but in a constrained open-pit scenario (a subset of the entire deposit), perhaps a Cu Eq. of 0.45%+ could be achieved.

Centenera has several catalysts worth watching for.  First and foremost — another drill result in June.  That hole was completed to a depth of approximately 450 m.  Also, a possible update on its 100% owned Organullo epithermal gold project in Salta province.  {2nd best province in Argentina– see brief overview of Organullo on left}

** These potential exploration target quantities & grades are conceptual in nature, insufficient exploration & geological modelling has been done to define a mineral resource.

The conceptual (initial) target is between 600-960k ounces gold, grading between 0.92-0.94 g/t Au.  Management acknowledges that Organullo will require a lot of drilling.

Another important catalyst is the upcoming closing of Centenera’s C$3 million capital raise.  Once fresh capital has been banked, investors will stop worrying about that perceived overhang.

In the second half of 2018, there’s a decent chance cash burn will decrease as management finds partner(s) on one or both main projects.  Partnerships typically involve giving up partial ownership in exchange for being free-carried (partner pays 100% of project costs) for a number of years [through key exploration (and possibly development) milestones].

It’s not hard to speculate on prospective partners.  For instance, below a list of 20 companies that are Major or mid-tier Copper & Gold miners / project developers, with assets in Argentina and/or Chile, Peru, Ecuador.  The top 9 players by market cap would not look at Centenera without evidence of the possibility of finding > 10 billion pounds Cu Eq.

The bottom 3 are small compared to the others, but could certainly come up with a relatively modest amount of upfront funding required to get the Esperanza project into more robust, steady, active exploration.

I believe that Centenera Mining’s valuation at C$10.1 M / USD$ 7.8 M is too cheap given its portfolio of projects & properties in Argentina.  Savvy natural resource stock investors point out that there are dozens of copper-focused porphyry targets in the hands of juniors that have > 1 billion pounds Cu Eq.  That’s true, I’m tracking about 3 dozen.

However, there are red flags associated with many of the other prospects.  For example, several projects are in higher-risk (than Argentina) or even dangerous jurisdictions in countries including the Philippines, Russia, Mongolia, Indonesia, the DRC & Namibia.

Even Peru, the 2nd largest Cu producing country in the world, a jurisdiction with at least 5 major Cu projects held by juniors, is facing increasing challenges on the community relations front.

And, the largest Cu producing country by far, Chile, has prospective projects at elevations above ~4,000 meters that introduce a whole new set of risks, expenses & challenges.  In part due to high altitude, Chile is much more sensitive to water issues.  I’ve been told that Chile has become considerably more expensive to operate in than most other S. American countries.

Centenera Mining’s [TSX-V: CT, OTCQB: CTMIF] Esperanza project is probably in the middle of the pack on this score compared to the 3 dozen global juniors I’m tracking, but better than that among assets in S. America due to it being in San Juan province, having a very low strip ratio and being high grade.  Esperanza is just 35 km from power lines and enjoys year-round road access.  NOTE:  {we still need to see further evidence of large-scale potential….}

Disclosures: The content of this article is for information purposes only. Readers fully understand and agree that nothing contained herein, written by Peter Epstein, about Centenera Mining, including but not limited to, commentary, opinions, views, assumptions, reported facts, calculations, etc. is to be considered, in any way whatsoever, implicit or explicit investment advice. Further, nothing contained herein is a recommendation or solicitation to buy, hold or sell any security. The content contained herein is not directed at any individual or group. Peter Epstein and Epstein Research [ER] are not responsible, under any circumstances whatsoever, for investment actions taken by the reader. Peter Epstein and  [ER] have never been, and are not currently, a registered or licensed financial advisor or broker/dealer, investment advisor, stockbroker, trader, money manager, compliance or legal officer, and they do not perform market making activities. Peter Epstein and [ER] are not directly employed by any company, group, organization, party or person. The shares of Centenera Mining are highly speculative, not suitable for all investors. Readers understand and agree that investments in small cap stocks can result in a 100% loss of invested funds. It is assumed and agreed upon by readers that they will consult with their own licensed or registered financial advisors before making any investment decisions.

At the time this article was posted, Peter Epstein owned shares and stock options of Centenera Mining and the Company was a sponsor of Epstein Research. Readers understand and agree that they must conduct their own due diligence above and beyond reading this article. While the author believes he’s diligent in screening out companies that, for any reasons whatsoever, are unattractive investment opportunities, he cannot guarantee that his efforts will (or have been) successful. Mr. Epstein & [ER] are not responsible for any perceived, or actual, errors including, but not limited to, commentary, opinions, views, assumptions, reported facts & financial calculations, or for the completeness of this article or future content. Mr. Epstein & [ER] are not expected or required to subsequently follow or cover events & news, or write about any particular company or topic. Mr. Epstein and [ER] are not experts in any company, industry sector or investment topic.