Last year, or maybe even the year before, we told you a story about a little gang of old timers who fell ass backwards into a soggy plop of ground in Manitoba that just happened to have lithium spodumene in it.

QMC Quantum Minerals (QMC.V) duly became clients of ours and asked us to help tell the story, and tell the story we did. By the time we were done explaining it, the stock had gone from $0.07 to $1.85.

We bought in at that cheap level, and we sold when the valuation seemed too inflated, and we talked you all through it, every step of the way.

Some of you did REALLY well out of the deal. But we stopped talking about it when they started over-promoing it, and the work promised never materialized.

The most recent news release from the company ventured into dangerous territory, when they talked up their historic drilling, a move regulators aren’t fond of. Hell, when we said in our initial coverage a year-plus back that historic numbers merely existed, the BCSC got all up in our grill and demanded we remove any mentions.

So when QMC posted those old timey numbers as news last week, complete with disclaimers that they mean nothing, there were a lot of ‘ooohs’ and ‘whoas’ in our office as we waited for the regulators to wield their hammers of compliance.

Let’s be clear: We like the region. We like lithium, and we like it in spodumene form. And the more we dug into that property QMC sits on, the more we were eager for work to be done to prove out what’s there.

That work has taken way longer than it should have. Meanwhile, a competitor has appeared next door.

And when I say next door, I mean close enough to borrow sugar.

It stands to reason that if there’s lithium at QMC’s Irgon mine at Cat Lake, Manitoba (and there is, we just don’t know how much), there’s going to be something similar at the edge of the property, which is where Equitorial Exploration (EXX.V) comes in.

Here’s what the actual drilling at EXX’s property looks like: 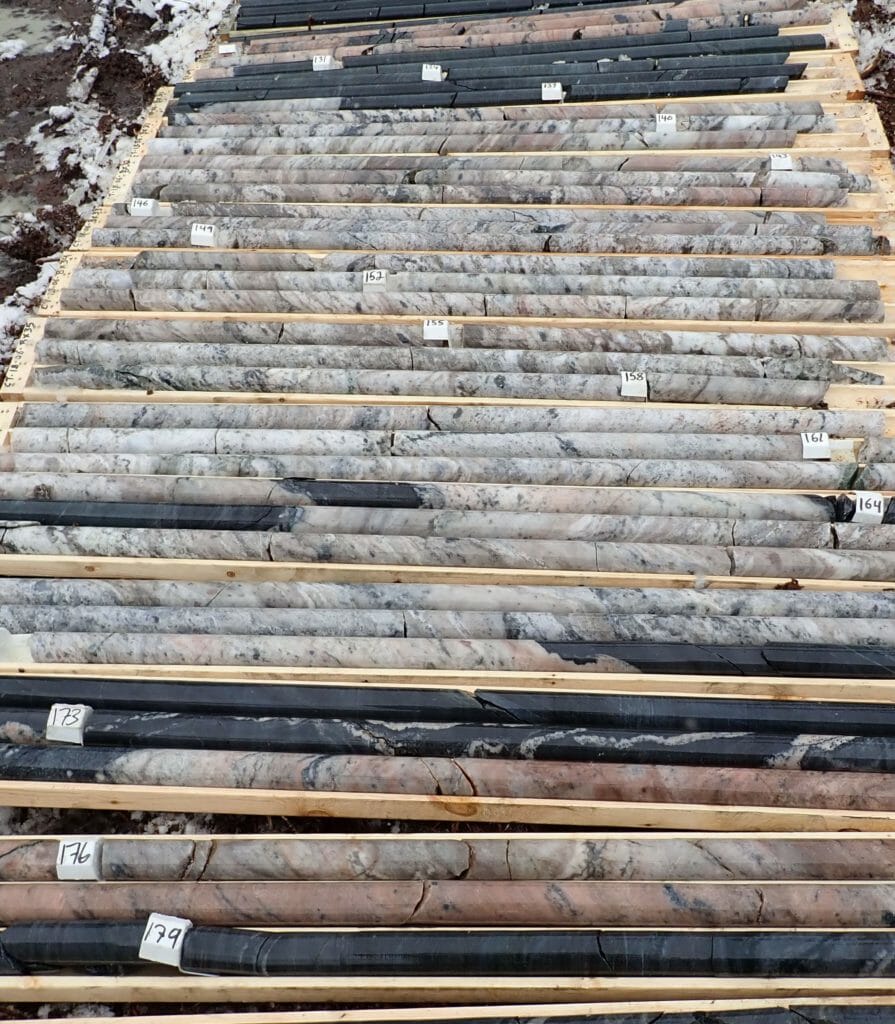 QMC had a head start on everyone in the area, because initially it was just them in the area. But instead of progressing the story, they farted around making 3D models and channel sampling.

Equitorial isn’t just drilling, they’ve completed their drilling. Meanwhile, QMC didn’t even apply for drill permits until last December, and only just received those permits in March of this year and intend to use them to validate their historic data.

Here’s QMC: ‘We have historic estimates that you can’t trust but maybe one day.’

You could literally throw a rock at it.

Now, Equitorial isn’t above mentioning QMC’s historic numbers in their own news releases, mostly because they’re on strike with what QMC is working, so those ‘unreliable numbers’ apply on both sides of the backyard fence. It means, whatever EXX finds, QMC likely also has – and vice versa.

Admittedly, it’s not an irregular thing for one neighbour to let the other neighbour do all the work, spending all their money, and then coast on the back of their news releases. This is called ‘closeology’, and many a good operator has watched their static stake-mates get bought out without actually doing the work.

Equitorial is aggressively developing four 100-per-cent-owned, high-potential lithium projects in North America. The Little Nahanni pegmatite group (LNPG) is an NI 43-101-compliant, hard-rock lithium property in the Northwest Territories. The Cat Lake lithium property in Manitoba, Canada, is directly adjacent to the Cat Lake mineral project, a highly prospective lithium property. The Tule and Gerlach lithium brine projects are located in lithium-rich Utah and Nevada within easy reach of the Tesla Gigafactory No. 1.

Again: $5 million market cap for EXX, while QMC, which has only their Cat Lake property to play with, sits at $35 million.

Now, don’t get me wrong here, I’m not saying QMC isn’t worth $35 million. Their property isn’t bullshit, their story is largely untold, and those historic numbers, though not NI 43-101 compliant, were basically the bible to mine operators back in the day. We can bank on there being lithium down there in some form.

QMC has plenty of work to do and lots of upside. In fact, the author of this piece continues to maintain a warrant holding in the company, though those warrants haven’t been exercised because the company hasn’t impressed that it’s moving forward aggressively.

It’s almost boring in its consistency, but it means results are coming soon and that could see an end to the $5 million market cap range.

We’ve been through this before. We’ve seen the upside through QMC’s past performance. We’ve never had drill results, however. This is uncharted territory and an important time to size up the opportunity.

For mine, this is a Moneyball pick. The market has missed it. Don’t be like the market.

FULL DISCLOSURE: Equitorial Exploration is an Equity.Guru client company, and we welcome them to our program. The author has a warrant holding in QMC Quantum Minerals and totally gets that if you guys decide to sell that down, it’s going to hit him in the pocket. That’s fine. Integrity has worth.