There’s a second-hand clothing store in my neighborhood, that’s got racks of funky clothes.

The store owner’s name is Alan.

One day I asked Alan where he gets his inventory.  He told me goes to the Salvation Army, estate sales, garage sales.

When I pressed him on his shopping technique, he said, “I’m patient, I know what I’m looking for, and when I find it – I negotiate a good deal.”

He and his team wade through warehouses of drab mineral projects to a find a few special gems.

Streaming companies lend money to miners in exchange for a chunk of their future cash flow.  They exist because bankers don’t know how to pick out the dress shirts from a rack of sweat-stained T-shirts. 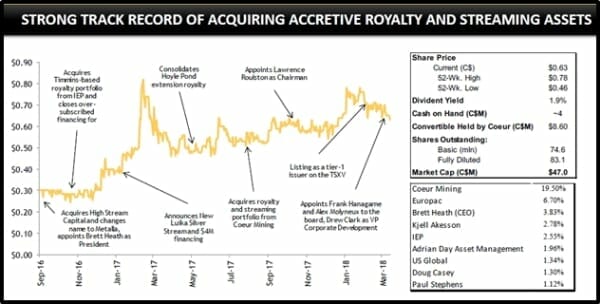 But the above chart was published 2 weeks ago.  The stock has been running.

This summer, Metalla (MTA.C) acquired a portfolio of three (3) royalties and one (1) stream from Coeur Mining (CDE.NYSE). 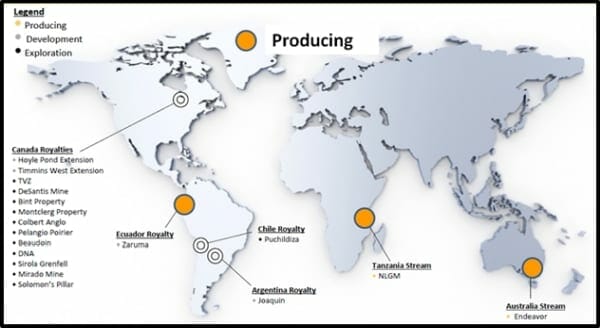 The 100% Endeavor Silver Stream is a prime example of a savvy MTA acquisition.

The Endeavor Mine was once the region’s largest zinc, lead and silver producers.

About 30 million tonnes of ore has been extracted with remaining reserves expected to support production out to June 2019.

Metalla will have the right to buy 100% of the silver production up to 20 million ounces As of April 2017, about 7 million ounces have been delivered.

MTA must make an “operating cost contribution” of USD $1.00 for each ounce of payable silver, indexed annually for inflation, plus a further increment of 50% of the silver price when it exceeds USD $7.00 per ounce.

Company-wide, MTA has a current yearly operating cash flow of about $6 million.  The company is targeting an increase next year to between $7 and $9 million.

Here’s the thing: based on Heath’s track-record: if he says something is going to happen – there is a high probability it will happen. 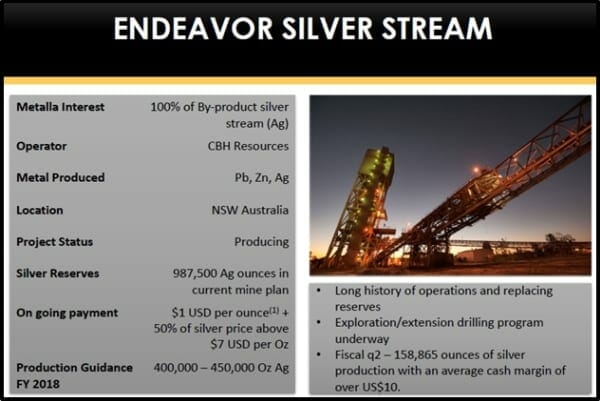 In a recent Equity Guru article, ironically sub-titled, “What’s a dividend?” – Chris Parry reported on the astonishing anomaly of MTA paying a dividend to its shareholders.

“After 18 months of successful wheeling and dealing, MTA has announced it will start paying its investors every month,” wrote Parry, “Assuming MTA pays the 0.15 cents per share for a full year, you’re going to receive $0.018 annually for every share you own, or a 2.6% payout on today’s share price of $0.68.”

“ Better than bank interest – and you get to keep profiting on any upward stock movement.

Metalla is currently holding EIGHT streaming and royalty deals with companies as large as the $14 billion giant Goldcorp (G.T) and the $3 billion Pan American Silver (PAAS.T), ranging down to the $30 million Core Gold (CGLD.V).”

“Damned if Metalla isn’t a shining example of a company doing everything you could ask of it,”, wrote Parry, “with quality of deal flow being paramount, and investor ROI their main focus.

The last time I went into my local 2nd hand clothing store – I bought a Versace Vintage Faux Fur Coat.

Kept me stylish and warm this long pissy winter.

Without Alan’s clothing knowledge and savvy – I wouldn’t own that faux fur coat.

Without Brett Heath’s precious metals knowledge and savvy – I wouldn’t own gold and silver revenue streams from mines in Ecuador, Tanzania and Australia.

I leave the shopping to the experts.

FULL DISCLOSURE:  Metalla is an Equity Guru marketing client, we own stock and are continuing to add to our base position.