Back in the olden days, when stocks were traded by men in pits yelling at each other about pork belly futures so old white men could win bets about homeless people (“Looking good, Billy Ray!”), companies aimed to make as much money as they could so they could pay dividends to their shareholders.

Why, I remember my mee-maw picking cheques out of the mail every month from her investments in the railroad which put me and mah sister through four grades of school. Before the tuberculosis set in, anyway.

Dividends used to be a thing, at least until the dotcom boom, when it seemed folks were suddenly totally fine investing in companies that would never share their wealth, which meant the only way they could make a return was from an accelerating share price.

This ‘growth is all that matters’ business strategy is prevalent now. In fact, the only stock I’ve been in over the last four years that sent me a dividend payment was Invictus MD Strategies (GENE.V) which dished some profit after an asset sale a few years back and, I’m fairly certain, did so for marketing effect more than desire.

That suspicion has not lessened now that Gene Simmons is their spokesman.

Well, you can add another dividend payer to the list now, because Metalla Royalty & Streaming (MTA.V), after 18 months of successful wheeling and dealing, has announced it will start paying its investors every month.

Metalla’s board of directors has approved and declared a monthly cash dividend payment of 0.1 cent per share for April and May, 2018, and 0.15 cent per share for June, 2018, on its common shares for the coming quarter (subject to any applicable tax withholding obligations).

Better than bank interest – and you get to keep profiting on any upward stock movement.

But MTA isn’t looking to keep its payments at 0.15 cents per share. They have grander plans.

The attached table sets out the monthly record and payment dates for shareholders of record. The company plans to expand its dividend over the course of the year, targeting a payout ratio up to 50 per cent of its operating cash flow after taxes and G&A (general and administrative) expenses. The dividend should give shareholders a link to gold and silver prices and performance of the company’s royalties and streams.

Metalla’s business activities can be accurately described as being financiers for mining projects. But instead of just straight investing in those plays they identify as likely being profitable, they receive ongoing royalties and/or finished product out of the deal.

MTA sends money to the company seeking financing in return for an agreed upon sweet deal on future production.

When that mine goes into production, a chunk of what the mine produces goes to MTA to do with what they wish. 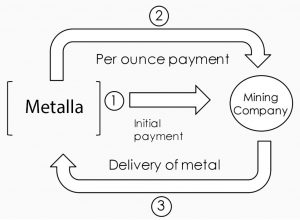 MTA sends money to the company seeking financing in return for an agreed upon percentage of future revenue. For the company in question, this is more appealing than a dilutionary financing or short term loans. For MTA, it pays nicely over the long term. 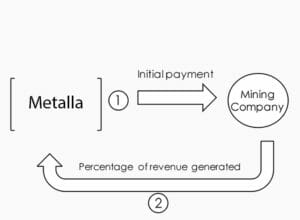 Metalla is currently holding EIGHT streaming and royalty deals with companies as large as the $14 billion giant Goldcorp (G.T) and the $3 billion Pan American Silver (PAAS.T), ranging down to the $30 million Core Gold (CGLD.V).

Non-executive chairman Lawrence Roulston was one of the mining world’s best stock pickers when he was running Resource Opportunities (now the newsletter home of James Kwantes), so his Rolodex is uber thick and his network expansive.

In other words, Metalla is in boardrooms most people can’t get into, and allowed into deals that aren’t run through brokerage houses. Deals normally reserved for guys with drivers.

The company has taken that credibility and used it to great effect, and quickly. Enough that it’s currently earning 96,000+ ounces of silver a quarter.

Generally speaking, public companies have three options when it comes to what to do with their profits, should they have any.

Most companies fall into the first category, because investors have fallen out of the habit of demanding otherwise. Some companies will opt for a buyback, but there’s conflicting opinions on whether buying one’s own stock to drive up the price (or stem the bleeding) is sound strategy or not (I say not).

A dividend however, while not likely to make you rich, is a nice encouragement for folks to maintain their holding in a company, which has an accretive effect on share prices, while leaving enough money in the bank to continue growing. If you hold that investment over a long period, the dividends begin to accrue and make for a nice hot tub-ready retirement gift.

Metalla didn’t get here by accident. We included them in a Twitch livestream over a year ago when they first became a client of ours and President and CEO Brett Heath mapped out their strategy.

In the time since, the company has moved up in value, gathered assets that are producing revenue, and delivered exactly what he said it would.

More detail on that revenue from yesterday’s news release:

Metalla Royalty and Streaming Ltd. had preliminary production results for the three months ended Feb. 28, 2018, of 96,542 ounces of silver sold and provisionally invoiced.

In addition, Metalla held 35,473 ounces silver of attributable inventory to be realized in the subsequent quarter. Metalla expects fiscal Q3 financial statements and management discussion and analysis to be released toward the end of April, 2018.

A dividend reinvestment plan (DRIP) is in the works, so your cheque can instead come as more stock each month.

Heath makes an interesting point on the value of that dividend;

“The increased dividend beginning in June will yield 2.7 per cent on an annual basis based on our current share price of 68 cents. This makes Metalla one of the highest-yielding precious metal royalty and streaming stocks. It also means shareholders have a material link to the company’s growth and precious metal prices. We will continue to grow our cash flow and dividend through accretive transactions.”

We’ve been marketing the Metalla story for most of a year now, and it’s one of those clients that we’re most proud of. Smallcap mining stocks get a lot of crap from the big board crowd for being shady or pump and dumps, but be damned if Metalla isn’t a shining example of a company doing everything you could ask of it, with quality of deal flow being paramount, and investor ROI their main focus.

Metalla’s job is to turn your money into more money, and they’re doing exactly that. Well played, sirs.

FULL DISCLOSURE: Metalla Royalty and Streaming is an Equity.Guru marketing client, and the author has owned stock in the company for some time now.