As I walked to the “Genius Bar” with VISA card in outstretched hand, it occurred to me: “Wouldn’t it be great if batteries were a. cheaper? and b. lasted longer?”

Of course, this is an extreme case of retail-robbery, because the battery-seller is Apple (AAPL.NASDAQ) – a company created by a talented, greedy, tyrannical fake hippy.

There is a frenzied global quest to build a better, cheaper battery.

Example: the 94-year-old co-inventor of the lithium-ion battery, John Goodenough, was recently in the news because he is developing an all-solid-state battery that could lead to faster-charging, longer-lasting batteries.

Nano One (NNO.V) is also running in the better-cheaper battery race.

NNO has demonstrated that its scaled process can make nickel-rich cathode materials using the cheaper lithium carbonate in place of the more expensive lithium hydroxide. 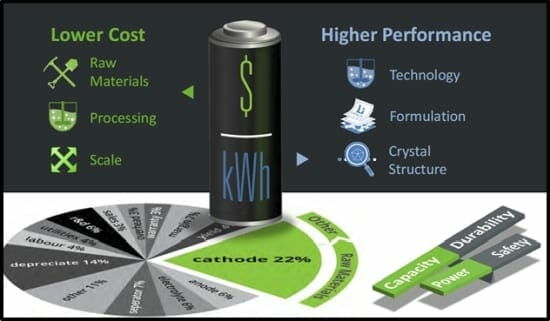 In the last week, the stock price at NNO has risen markedly. Steadily increasing volume followed by a 12% yank today. Those involved in the recent private placement (myself included) got in at $0.32. Even while that financing was rolling, the stock was jumping towards $0.40, and today rocketed through that barrier to $0.44.

The stock has been doing pretty well since then. 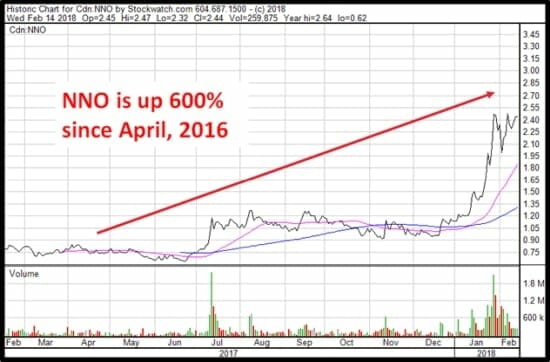 If you think this is the end of the run – you haven’t wrapped your head around the size of this market.

It’s currently about $15 billion and growing $750 million a year.

To make it real, try counting the batteries in your home (and in your garage). 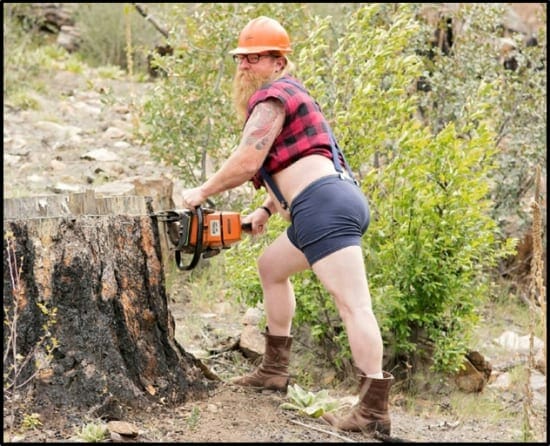 This patent is directed at a lithium-ion battery using cathode materials made by Nano One’s proprietary process.

Nano One now has 5 patents and over 30 pending patent applications worldwide,” said Joseph Guy Ph.D., patent counsel and director for Nano One.

According to a January 29, 2018 update, Nano One is now working with a “tier 1 automotive supplier on the development of cobalt-free high-voltage spinel (HVS) and nickel-rich NMC cathode materials for the advancement of solid-state lithium-ion batteries.”

“There is a global effort underway to make solid-state commercially viable,” stated NNO CEO, Dan Blondal, “with the goal of increasing safety, energy density and cost savings, and Nano One’s technology contributes to the development of the required cathode materials.”

“The successful construction and operation of Nano One’s pilot plant in 2017 has enabled the production of larger volumes of cathode material.”

Operating the pilot has allowed Nano One to complete preliminary engineering plans for a modular 3300 tonne per year cathode production unit that has the ability to supply cathode materials for about 24,000 electric vehicle batteries.

It’s like testing a new pancake mix and making enough batter to feed an army.

This company has balls the size of Nebraska.

“Nano One’s process can use lithium feedstock in the form of either carbonate or hydroxide for the production of high-performance cathode materials,” summarised Blondal, “and we have begun working with a range of lithium sources from various producers to demonstrate the flexibility of our processing technology. We believe this could reduce constraints on the supply of battery grade lithium by enabling new sources.”

We’re now in our second year of coverage of NNO, and the company has proved out their tech and hit their milestones:

We told you before, and we’re telling you now.

Nano One is a potential battery-tech disrupter.

These are early days.

Full Disclosure:  NNO is an Equity Guru marketing client, we also own stock.