Nano One Materials (NNO.V): They promised to change the game. Game changed.

Back about eighteen months ago, when we first started talking about a little tech startup called Nano One Materials (NNO.V), the usual troll crowd stopped by to blurt out things like, “Oh, they’re going to change the way rechargeable batteries are made? Yeah right,” and “Let’s see if they can ever get their pilot plant off the ground,” and “The big boys will never do business with a bunch of nobodies in a garage in Burnaby.”

We’re now in our second year of coverage of NNO and we haven’t for a second felt like they’re off their game.

They proved out their tech: Check.

They got non-dilutive government grants to build out their pilot plant: Check.

They finished said pilot plant on time, and without any budget freakout: Check.

They raised money all along the way, and people who bought in were able to make a profit: Check.

Nano One is at the point in its existence where it has proven everything it needed to prove. It can make lithium ion battery cathodes better, cheaper, stronger, faster charging. They can tweak their process and formula and plant to suit whatever a Tesla or Panasonic or Mitsubishi or Apple may need.

And that’s no idle boast. From the company, this week:

Vancouver, B.C. October 10, 2017: Dan Blondal, CEO of Nano One Materials, today announced that Nano One has successfully demonstrated the synthesis of high energy cathode material for electrical vehicles using lithium carbonate feedstock with energy densities on par with industry standards. This demonstration underlines the opportunity of Nano One’s technology to enable a wider range of lithium sources for the rapidly growing electric vehicle market and supplements Nano One’s other opportunities in the space including cathode material durability, power, energy and processing cost.

“To provide electric vehicles with greater driving range, the industry is transitioning to energy dense lithium ion cathode materials with increasingly higher proportions of nickel relative to cobalt, manganese or aluminum,” explains Mr. Blondal. “Current industrial methods require lithium hydroxide as feedstock for these nickel-rich cathode materials, however, Nano One’s flexible process also enables the use of lithium carbonate and we believe it has the opportunity to address challenges in the lithium supply chain.”

This is a big deal. For mine, there’s no bigger opportunity in the tech world than taking lithium ion technology, which has been substantively the same for decades, and open it up to other materials while making it patently better.

“Nano One’s laboratory batches of NCA and NMC811 have energy densities of 710 and 750 Wh/kg, respectively,” said Nano One Principal Scientist, Dr. Stephen Campbell. “This is comparable to the same materials made with lithium hydroxide and demonstrates a cost effective lithium alternative. The path to commercial scale is well understood from our pilot experience with NMC111 and NMC622, consequently, the technology has the opportunity to address constraints in the lithium supply chain.”

I’m going to assume you’re a cynical bastard and don’t believe this is as big a deal as they think it is. That’s good. Cynics lose less money on investments.

So let’s do some digging. I’m using a reference site called BatteryUniversity.com because they have no dog in this fight.

According to that site, the energy density of garden variety Lithium Nickel Manganese Cobalt Oxide (LiNiMnCoO2 or NMC, referenced by Dr Campbell above) is 150–220Wh/kg.

Lithium Nickel Cobalt Aluminum Oxide (LiNiCoAlO2 or NCA, referenced by Dr Campbell above) brings 200-260Wh/kg. Nano One has it at 710 Wh/kg in the lab.

Now, it’s important to understand that we’re comparing apples to pretzels here. Lithium-ion batteries often feature a variety of positive and negative electrode materials, and the energy density will vary accordingly at various points in the discharge process, under different conditions, etc etc. I’m not a scientist, but Wikipedia has a few bouncing around.

So let’s not get sucked in to claiming Nano has a historic combo of chemistry that will kill every existing lithium ion tech out there. But what they do have is something that allows a battery maker to examine new options.

That’s the game changer. If cobalt is too expensive and hard to source to expand production without expanded cost, Nano gives an option to go a different route and not suffer for it. That’s been demonstrated.

Nano One won’t tell you that a who’s who of battery people have been through their plant, because most anyone who takes a look with any sort of commercial potential will be shoveling around non-disclosure agreements and playing things very coy, as they should.

And we saw with Saint Jean Carbon (SJL.V) earlier this year that name dropping a battery giant is a great way to get a short term share price spike – AND the negative attention of both the giant in question and regulators.

Thursday, the stock slipped to lower than it had been before the great bullshit Panasonic deal lie was spun, to $0.065. SJL had traded at around $0.08 for a while before streaking upwards to the $0.30s in a handful of days. We called bullshit (right in the headline!) while it was still going up. We were right.

The reason the stock slipped Thursday indicates much peril to come for SJL’s directors, insiders, and, in some cases, their significant others.

So Nano One continues to do things right, which is the opposite to how you do things if you want to pump a stock price. They tend to downplay events rather than call them huge, and keep business negotiations and taps on the shoulder from potential partners quiet, rather than Saint Jeaning them.

But that’s how you build a stock over the long term, delivering consistent returns to investors and growing a market cap that makes you no longer the guys in the garage, but rather the mid-sized players developing tech that makes them almost easier to acquire than license a deal with. 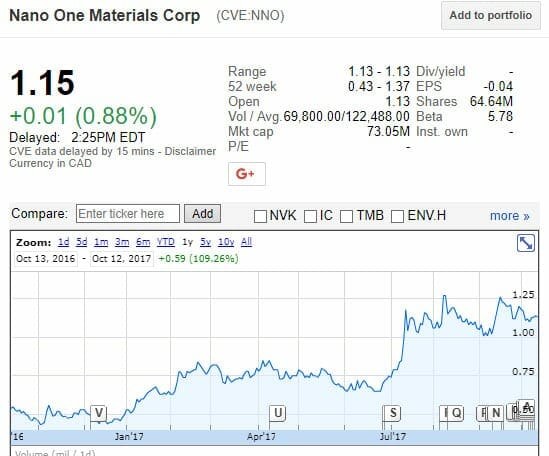 Nano One were one of the first companies we took on as clients, back when ‘we’ were ‘me’ with a laptop, sitting in a cafe, wondering if this whole ‘investing for millennials’ angle would pay off.

It has, both for us and for NNO. And we feel like it will keep doing so. That’s why in the last financing, we bought in. Again. 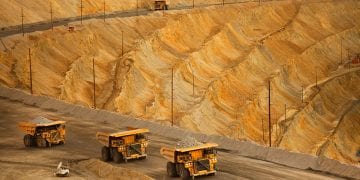