I get it, you’ve heard of Nano One Materials (NNO.V) and you know they’ve promised they have tech that makes battery metals processing cheaper, better, smarter, stronger, faster, sexier, a more tender lover, a dab hand with a hammer, more likely to be chosen valedictorian, and a sure-fire future favourite of Tesla.

The market has been kind to Nano One, and Nano One has been kind to the market in turn. When I first started writing about the stock about a year ago (it was one of Equity.Guru’s founding sponsors, in fact) it was priced at $0.15. Since then, it’s been on a steady rise through most of the last year and, frankly, any time you might have bet against it through 2016 and early 2017, you’d want to take your profits quickly, because it’s really not one for a sustained downturn.

Why? Because upside to the level of a martial art, is why.

Initially, it was an idea to replace hard-to-source and/or expensive elements in the lithium battery creation process, and to process the remaining elements (or substitutes) in ways that were better.

But along the way, the smart folk at NNO (they don’t enjoy me calling them pointy heads), kept finding new ways to improve the process. Then they took out patents. Then they got government grants to help them build their pilot plant.

Right now, that pilot plant is a few screws away from opening. How do I know this?

Because I’ve seen it.

In fact, I took pictures. They didn’t mind, unlike most pilot plant operators, because the secret sauce to this operation isn’t the equipment. It’s the, well, secret sauce. It’s how they make the elements, how they prep them, how they combine them, how they heat and alter and generally screw with them before they even really kick through the plant.

In a nutshell, Nano One doesn’t want to make lithium batteries themselves, even if they could make them cheaper, faster, and better performing with the tech they hold. They want to show battery manufacturers how their knowledge can be used to turn a three-day process into several hours, how their processed product outperforms existing commercial products, and how they can do things like say, to hell with cobalt… Who needs it?

Absent this report will be the extensive and detailed explanations that I was furnished with when the NNO brainstrust took me on their tour, because I won’t be able to do it justice. But I’ll layman this up for you as best I can, and demonstrate what the team at Nano have been working on.

If you’re truly interested, contact them and ask for that same tour. They’re okay with it. They’re happy to show what they’ve got because, frankly, what they’ve got is bonkers clever, and if you can keep up with the science, you’ll come away suitably chuffed.

First we’re going to get into what Nano One does.

Did you catch all that? No?

Okay. So up in the upstairs lab at NNO is a pretty simple setup.

So, in that cylindrical gizmo is lithium. It’s stirring around in a slurry. Nearby is a collection of other metals/chemicals that are being mixed together. You can pretty much tell there’s some cobalt in there from the blue colour.

Lithium on the left, cobalty mix on the right. They’re stirring around and combining. Right here, we’re already off the rails from what the traditional lithium ion manufacturing/processing does.

Once they’re done with step one, they’re brought together and given another swizz.

The ‘secret sauce’ here is how the chemicals are combined. I’m going to get a lot of sciency things wrong here because I spent more time chasing girls than actually attending high school chemistry class, so don’t go buying stock based on my ability to mimic a chemical scientist.

But, in a nutshell, traditionally, when you’re adding these metals and chemicals together, you get a lot of extra crap that sneaks in that limits the usability of the finished product. Just as a silicon chip manufacturing plant needs to control every dust particle that lands to ensure their product is at peak performance, so too does the creation of a lithium ion battery’s bits. Too much detritus and you’re going to get crappy products.

So, usually, you get your cobalt and your manganese and you blast the ever-loving crap out of it with immense heat. This is expensive, takes time, it pollutes, and it’s not all that effective. It’s just what’s always been done.

In addition, once that’s done, to combine the metals properly, you’re going to blast it again to melt it all together. But because you’ll get uneven globs of the individual elements, you then need to grind that product down to a dust-particle sized fine powder, which you then mix about again, then re-melt together, then grind AGAIN, because it’s the only way to be sure everything is properly mixed to create the metal needed to make the battery work.

This process SUCKS. So NNO doesn’t do it.

NNO instead combines the powders in a slurry, allowing them to mix about properly. Which sounds easy, but isn’t. Each metal has a different heat point where they’re ready to receive their new friends. And that point is not broad.

Traditionally, you’d just throw everything in a kiln and cook it all on blast. But that’s not the way to get the best out of the bits. Each metal and chemical reacts to heat in different ways, so while you’ll get them all melty by setting them to Superman Vision Ray levels of pow, some will falter a bit. the industry ‘guesstimates’ as things stand.

Nano One does not. It gets REAL freaking precise. 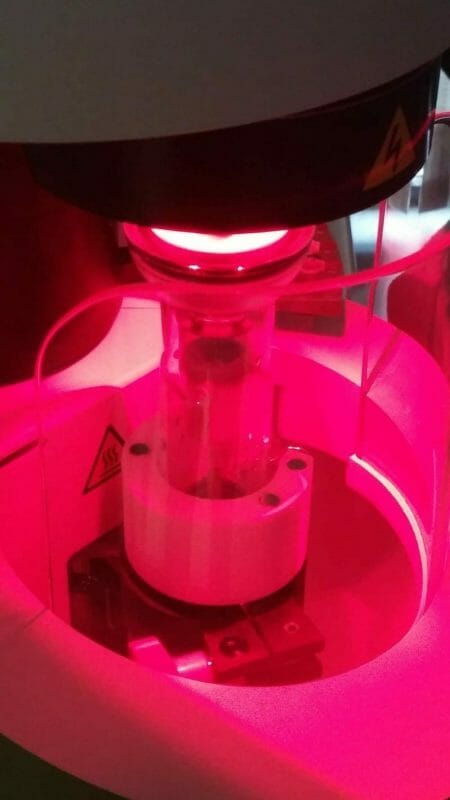 This machine is what I like to call the Disco Inferno. What it does is pound a strip of different samples with laser-controlled heat, which is adjusts as it goes to get a sense of exactly when that sample is at the prime place to make it do what Nano wants it to do. We’re not talking a degree here or there difference, we’re talking tiny shifts, tracked by computer, to tweak that metal to perfection.

In other words, Nano knows at what point the metal is not only heated enough to be useful, but at precisely the point where it’s most useful.

This machine is so finely calibrated that, when Nano installed a new phone system recently, the electromagnetic waves from the phone threw off the results for two weeks until they figured out what was up. 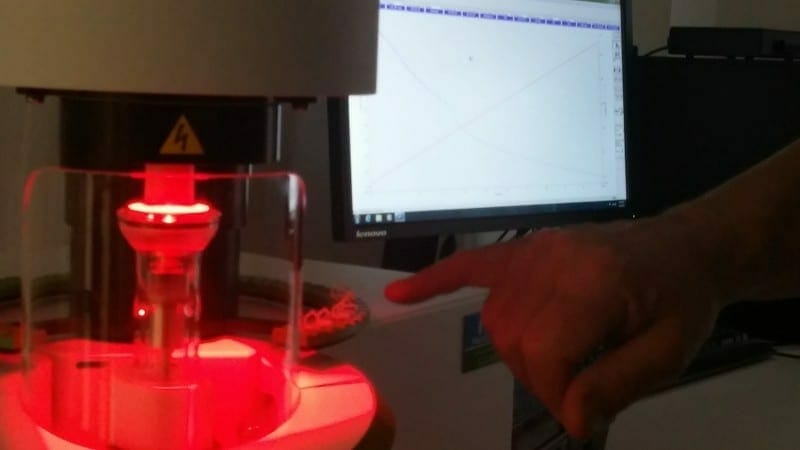 That’s my fat hand, right up close to it, not being singed. But get your pinkie under that laser and you’re going to frowntown.

You can see on the screen next to it, where the data is being charted over many hours, that the change in the sample is considerable, even with small adjustments. 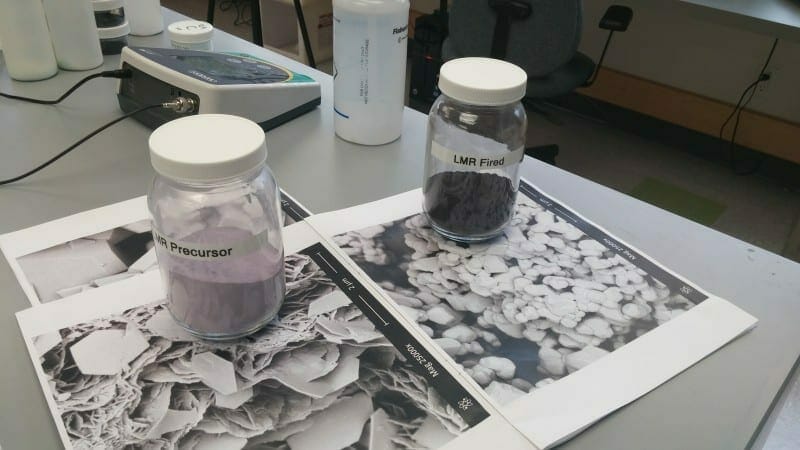 Why is that important? Because when Nano understands how these metals behave at every level of heat exposure, and how the different levels change the final product, it can find its way to producing a quicker, cheaper, slower draining, faster charging battery.

Above, you can see the result of the NNO process. On one side, what the LMR looks like under a microscope before it goes to the kiln. On the other, what it looks like afterward, with everything lovely and mixed and ready to charge your iPhone. 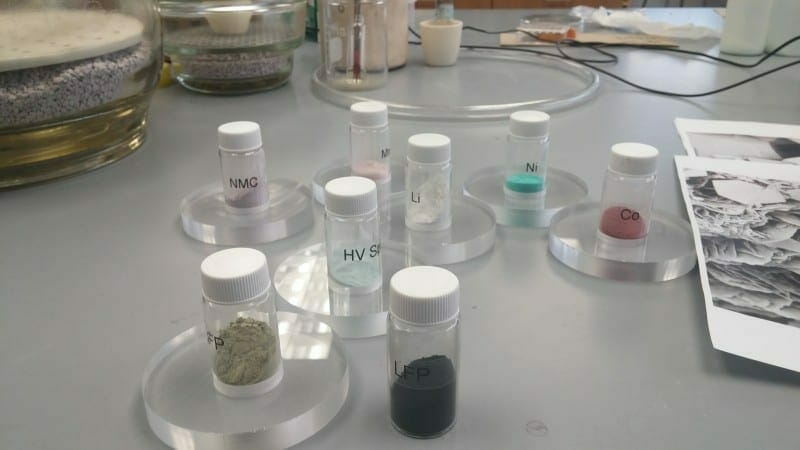 The powders they create – they’re pretty. What you can see above is the different metals they utilize, and the finished products when they’re combined and processed.

So what does this all look like when it’s not in a lab? 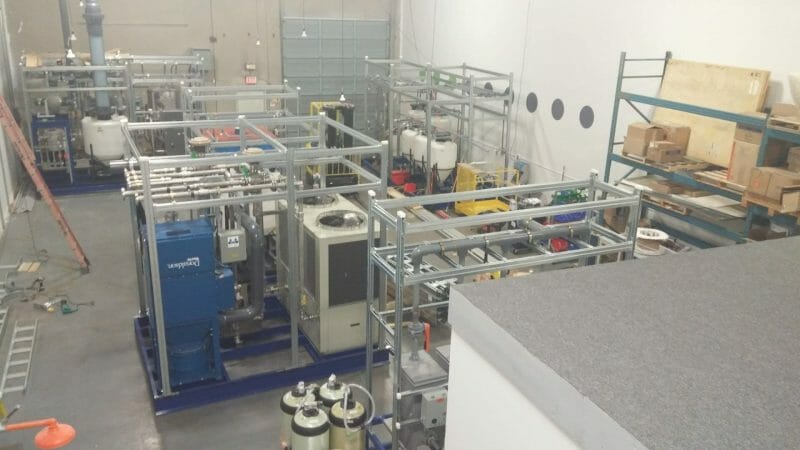 When I showed up, a few pieces were still being waited for, so some shuffling was still to be done. But you get a sense of what’s possible. 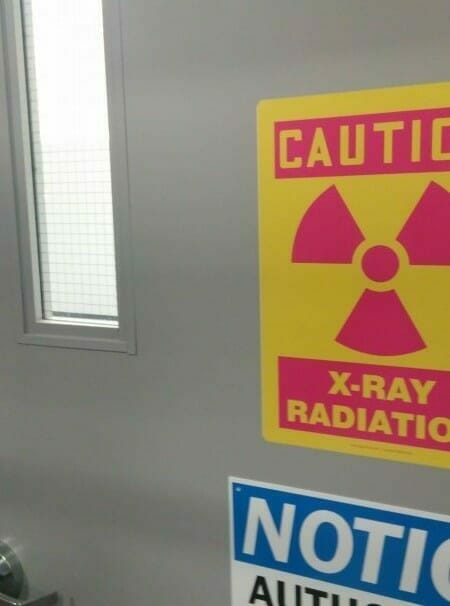 Now, I’m not going to try to tell you what all this does, other than to say it’s a larger scale version of the process in the lab. 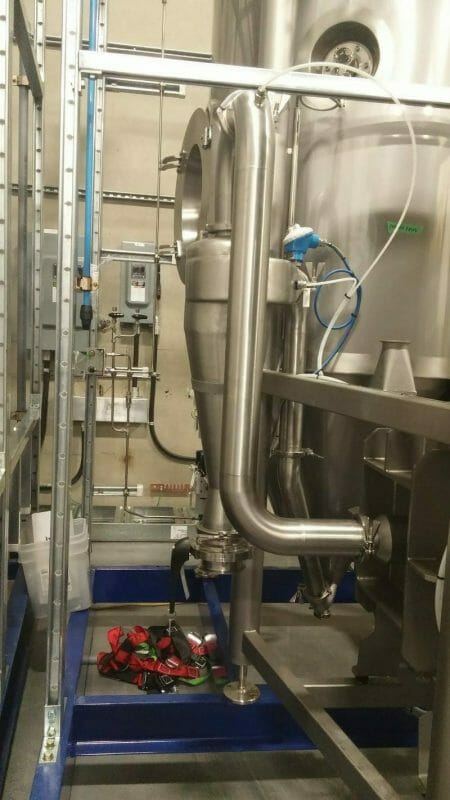 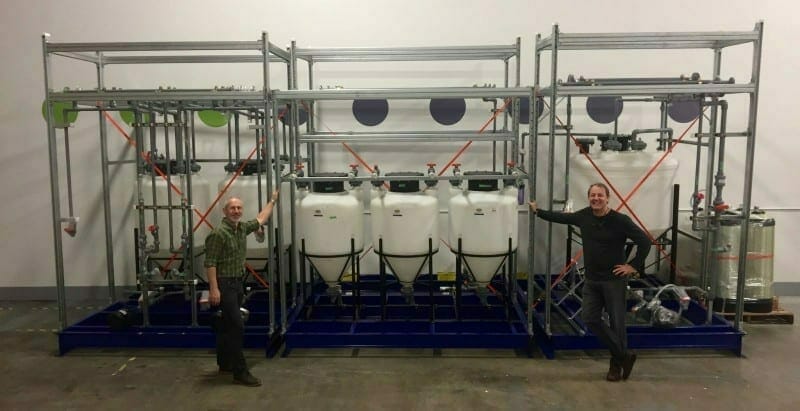 Materials go into big old hoppers, they’re churned into a slurry and combined at the right levels, they move through the system and are heated and mixed… 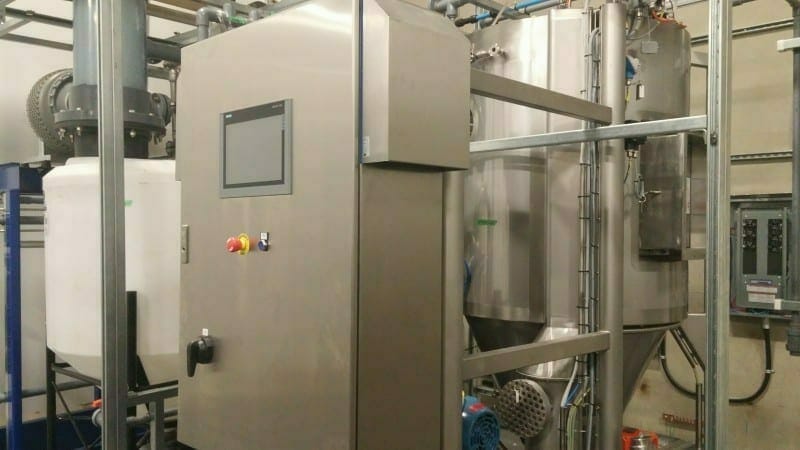 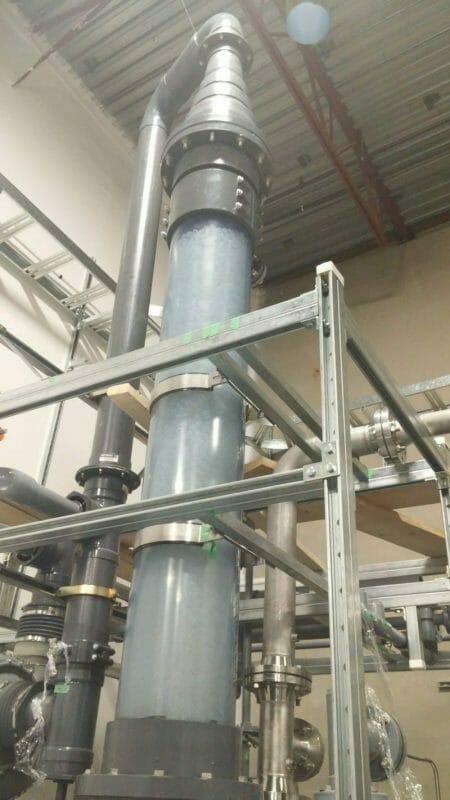 This big old tube filled with wiffle balls helps extract the moisture out of the steam that emanates from the process. While this isn’t a closed loop system due to its small ‘showcase’ size and the company’s desire to keep costs low in the set-up phase, the system is designed to be closed loop in the wild, which is exactly what battery processors want/need. 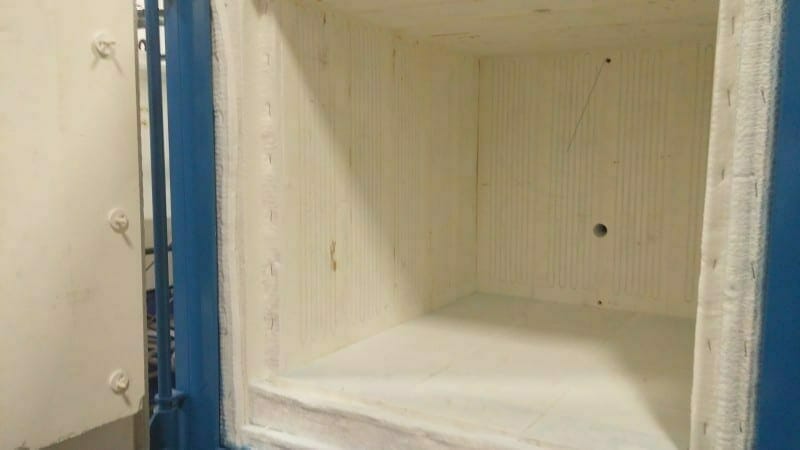 This is the kiln that the finished product is baked in. I’m not going to say it’s big enough to fit a journalist in, but if you folded him efficiently…

Nano One wants to show battery developers what can be done with their tech and a system this size allows them to produce kilograms – even tons – of product, rather than the few grams a lab can put out.

If Tesla, as an example, wanted a battery cathode of a certain variation to test for an upcoming product, most battery developers would struggle to change their entire set-up to produce something small, and to order.

NNO has that system today. They tell me they can make the changes required to their system over a weekend and be producing whatever combo of metals is needed by the following Monday. That’s, as things stand, a business model most people would invest in.

But that’s not the end game. 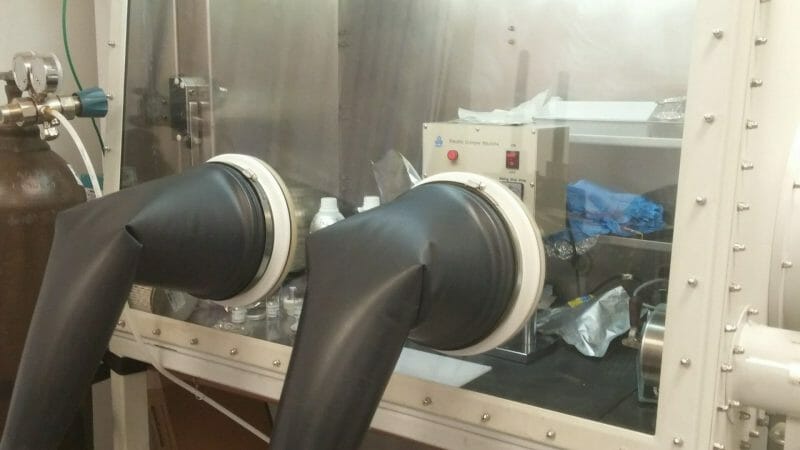 What you’re seeing here, with the Homer Simpson nuke gloves, is where NNO’s team makes batteries.

No, they’re not just making the metal someone might one day put into a battery, they’re pressing, by hand, hundreds of battery cells. 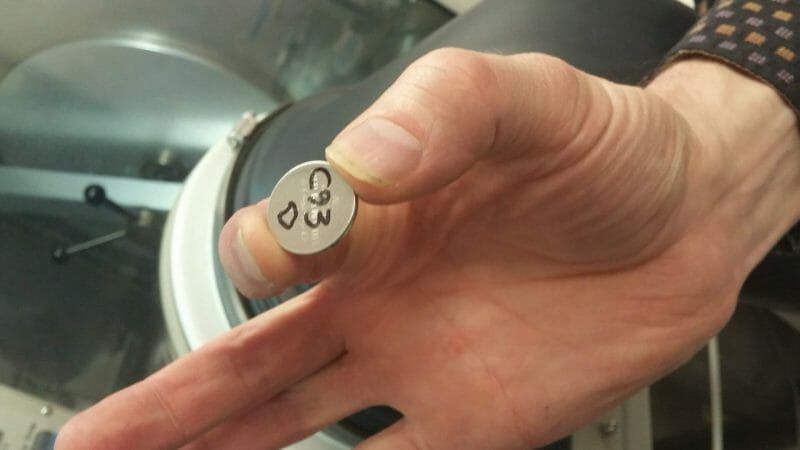 This is a hand-made Nano One battery cell.They make these because they’re testing every possible combination of tweaks. C93-D will be one of hundreds tested his weekend, and its elements will be prepared and processed in a unique way, that won’t be seen in C93-E or -F.

They’ll then spend the weekend charging, depleting, and recharging and depleting, those cells hundreds of times. 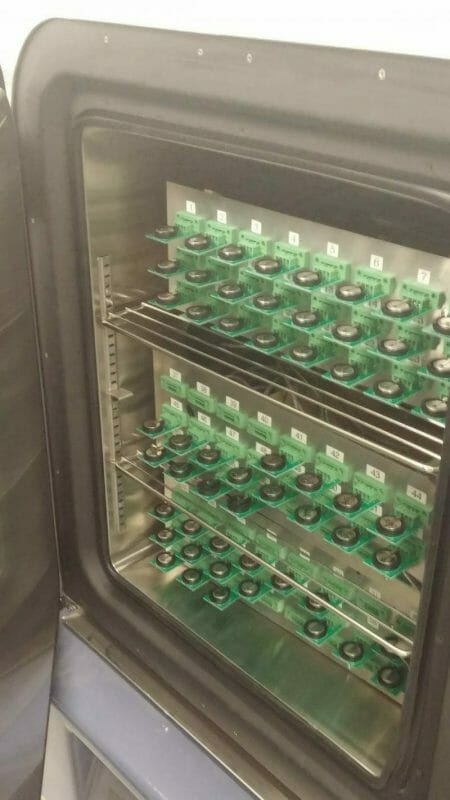 So they lock them in for days and blurt away, with a nearby analyst watching what happens with the data. 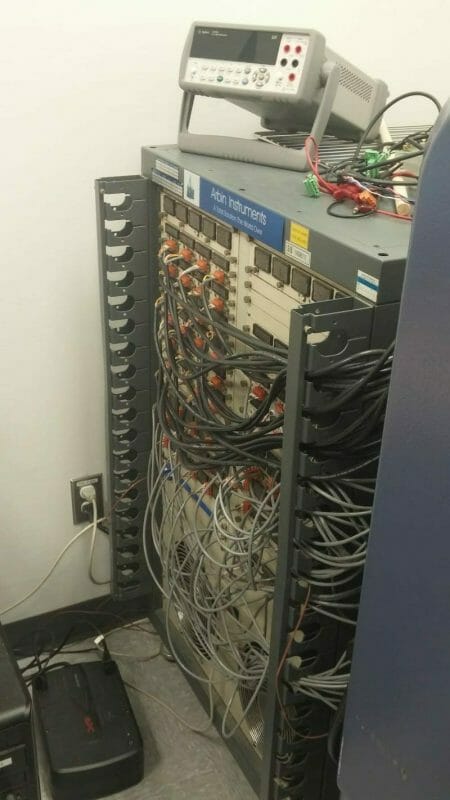 This is the system that is trying to hurt those little snowflake batteries. 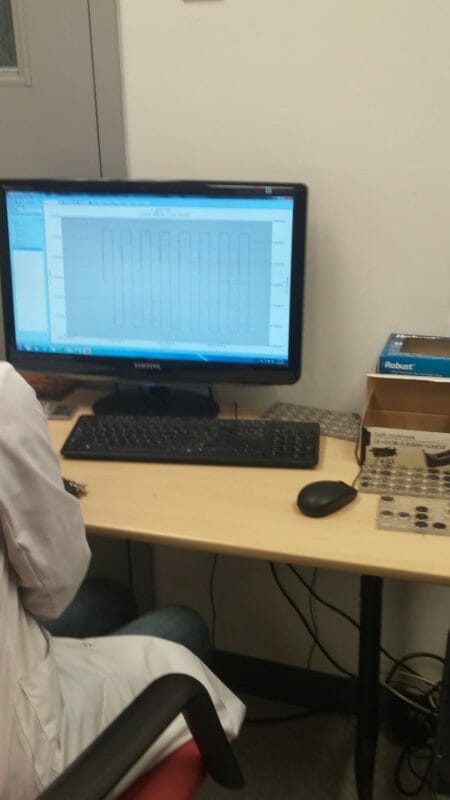 And this is where Nano learns what’s up.

I apologize in advance to anyone with a strong background in science whose eyes have rolled out of their head by now with my ham-fisted relaying of what is a unique, new, demonstrable tech.

My aim with this piece was, more than anything, to show what is happening at NNO is real and big. The pilot plant is freaking DONE.

Next step? Visits from the big boys. And that’s when this stock goes cray. 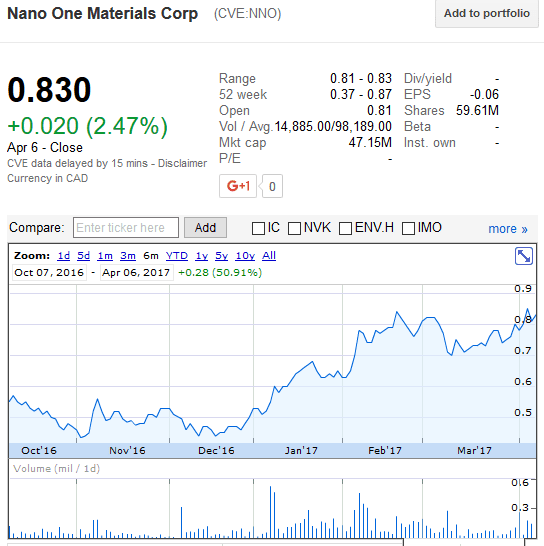 FULL DISCLOSURE: Nano One Materials was a founding sponsor of this site, though has no commercial relationship with Equity.Guru currently.

Why did the stock drop like a rock today?

Some thoughts on a valuation of Nano One Materials: https://ceo.ca/@JPN19685/nano-one-valuation