Order In The Chaos: If And How it’s All Coming Apart

The feeling that The Grand Selloff is bound to come eventually kind of hangs around in bull markets. It dulls as time passes and is the fuzziest at the very top, when new money is finally diving in because they figured it could never happen, and the experienced money is either numb and complacent, or so deep in the black that they’ve just decided to keep going and take the hit when it comes, because (shrug) “nobody can time a top.”

Nobody ever denied that these valuations were stupid. They were stupid 12 months and 40% ago. The “reasonable valuation” boat hasn’t just sailed, it’s got sunk by the USS Capital Gains torpedo ship a long time ago, and the brass has already been stripped from the wreck. No hard feelings. It was just business.

Trading a bull market is about running with the current, not against it. So overbought conditions rage like a structure fire until they run out of fuel. That fuel is one part liquid cash and one part pure, guttural, opinion-driven sentiment. In market psychology terms, sentiment is the way we’re collectively expressing our fear and greed. In transitions like this, once the initial bloodletting calms down, investors search their souls and join the bull team or the bear team – whichever one looks like it will have more numbers at the trade horizon. In the short term, it’s always team bear. Fear travels a lot faster than greed. That’s why nobody ever runs a promotion to create selling. The question that needs to be answered is: “when and at what level will greed get moving again, and Team Bull start to look good to most of the market?”

The Case for the Short Term Recovery

– Anyone Who’s Ever Managed Stock Brokers

I’m inclined to see Facebook’s ban on cryptocurrency ads as the direct cause of this latest crypto crash. Without a sales force, there is no buying. The stock market, conversely, has an enormous sales force, and it isn’t bound to social media.

The equities marketing machine that is Wall St. did a fine job bringing everyone and their dog groomer in for the last ride, and its job at this point is to get through to most of the liquid money and convince it that it’s missing out as its sitting on the sidelines. Nobody’s under any illusion that sell-side institutions can do this all on their own, but the message that the bull trade is back on is ready to spread the second it’s even a little bit believable. Presently, we still have a retail public that is looking to buy. They’re susceptible to messaging, and if they’re liquid they’ll bite. It’s only a matter of whether or not there is enough money momentum to tip the sacles.

The Shorts, of course, have another idea. Herman wrote a post the other day about how, having finally been right about the stubbornly overvalued Canadian pot market, the downside bets have moved over to the bell weather, cornerstone-of-the-economy type stocks, and piled on (we’ll be watching marijuana closely today to see whether the pot companies bucking the trend yesterday was an indication of strength or just the shorts covering). Shorting the banks is a reasonable move as the economy falls apart – more on that later – but it’s still early.

If It Can’t Be Explained, Does It Exist?

With widespread panic at the top of an overbought market for no discernible reason, one might expect me to be doing an I-told-you-so lap, and warning of fire and brimstone. I may yet, but for now I’m unconvinced. For the past 2 trading days, this slide itself has been the story. To a news junky, that comes off a bit thin. Nobody has been able to put their finger on a “why.” The markets started falling out of nowhere and left everyone scrambling for something to pin it on. The potential for a rate hike this year is the best idea anyone’s got, and that’s clearly what business desks tell news editors who need a headline answer and 400 words on why the the stock market is upside down, and now.

Everyone knows a rate hike would be a bullet and a coffin nail all in one for a market built on cheap money. I even said as much in my part of our 2017 wrap-up, because it’s year-in-review-level banality. If there were actually a rate hike it would make sense, but the Fed didn’t publish any guidance that changed their outlook, and these whispers about an extra hike are decidedly trailing this slide, not leading it. It’s a reason that gets thrown around when nobody has any ideas.

Barring the emergence of any cohesive narrative about what caused this to happen all at once, I’m inclined to believe that the greed seed, once watered and fertilised, is going to get going again relatively quickly here. Why wouldn’t it? Once the selloff chills out, things will get boring, and markets will get back to trying to find growth.

If it chills out…

The Case For The End Of The World

The shorts piling on the banks is, of course, the right move based on market action. But it’s being made automatically… right? It may be that the absurd, all-asset-class-bull-market-of-a-lifetime that defied gravity for no reason that anyone could explain for so long becomes much less of a mystery once we’re also able to explain why it is falling apart so quickly.

The financial services sector has had an absolute field day in this market. A never-ending parade of investment bankers spent the best part of the last ten years or so inventing new and different exchange traded products that are essentially stocks made of stocks. We have ETFs and ETNs that are double, triple, quadruple leveraged… ones that track every index, mimic short positions, mimic short positions on those short positions, and give traders and fund managers an opportunity to conceive strategies that lose track of what they were trying to bet on in the first place. A virtually unlimited universe of liquid assets to bet on and against, give managers the ability to get dangerously clever. Bets that used to be too risky for large positions to take reasonably can now be part of strategies that get hedged with exotic, tradeable products designed to be bought as plug-in side bets that trim risk profile. In other words, billion dollar funds that probably should have been in the bond market somewhere went chasing yield in the stock market, and shielding themselves from the swings by matching it with a position in special products that run inverse to volatility. Huge money piled in to a red hot market, because the downside risk was made acceptable by a bolt-on hedge. Alchemy. Self-perpetuating. And really good for the stock market… until it’s not.

Here’s the VIX at the close Feb 5. 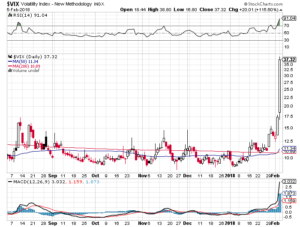 The VIX is an index that tracks downside puts that are bought on the components of the S&P 500. See, back in simpler times, when traders wanted to hedge out their risk, they just bought the right to sell a stock at their floor price as an insurance policy. Someone got the idea of tracking those puts as a barometer of how much fear was baked into the system. Yesterday there was a lot.

The VIX didn’t use to be something you could trade. It was just an indicator. But neither did the S&P 500 itself. Not long after someone figured out that one could just buy all of the stocks in the S&P 500, and list it as a tradeable product, someone else figured out they could just buy all of the puts in the VIX, bundle them up and list those, giving traders who were interested direct exposure to the previously untradable VIX. Handy! And why stop there? Today there are various different brands of tradeable short term VIX products, mid and long term VIX products, double leveraged versions of each of them, and of course, an inverse VIX product called the XIV.

The XIV’s very existence puzzles those of us who don’t build trading strategies that look like calculus homework. An inverse VIX is basically a bet on a settled market. It’s “un-volatility.” XIV is eating shit right now and, as CNBC’s Thomas Franck reports, that’s causing problems in the after market:

The VIX doubled during regular market hours Monday, causing obvious havoc for a product seeking to track its inverse return. Though, the XIV dropped just 14 percent during regular trading.

But then after hours trading began and the security, popular with hedge funds betting on an ever-placid market, was off by 80 percent in extended trading.

The move after hours sparked fear among traders that violent declines in exchange-traded notes like this one would cause market volatility measures to spike further and weigh on the broader market.

The dive itself is to be expected, but a bunch of traders struggling to get an inverse product off of their books at any cost in the after markets isn’t a good sign in the short term. There’s clearly more exposure to these things than there was ever intended to be. There are a lot of different ways to conceive of an arb trade, and many of those constructions are never truly tested until the markets fall apart.

But the traders who put the Lego blocks together are only half the story. These products are able to exist because large investment banks create them synthetically through a pledge of the securities that underpin them. Whether they hold the securities they’re supposed to at any given time isn’t always clear. I’m inclined to wonder if they’ve worked their responsibility to hold those securities into an arbitrage of their own which, for all we know, may itself include some combination of exotic securities.

A previously unknown or undisclosed lopsided exposure of a large bank or hedge fund would almost certainly end up being the cement that these boots of fear are made of, and send this whole thing down for a real long swim.

But, absent another Lehman Brothers style event; a big name being caught insolvent, the money is likely to return to its natural course of greed in relatively short order.

*Correction* A previous version of this post stated that XIV should basically track the S&P. It only does that when the S&P is in a freefall. The XIV inversely tracks the VIX.