Waaaaaay back in July, 2017 when Harvey Weinstein was just another lovable philanthropic movie mogul – we pointed out that there is an opportunity brewing in the weed space for beverage companies:

According to Transparency Market Research, the $1.6 trillion global non-alcoholic beverage market will reach $1.9 trillion by 2020 – expanding about 4% a year over that time.

It doesn’t take a genius to predict that these two mega-trends are going to make kissy face.

The collision of the two industries happened faster than we anticipated.

When deals like this happen, there is often a ripple effect.

One technology company we helped build, woke up one morning to discover that Google (GOOG.NASDAQ) had purchased a competitor, and would now be providing the exact same service for free.

In the case of the Constellation/Canopy deal, there has been a spin-off effect for a number of companies in the weed, value-add space.

For instance, Nutritional High (EAT.CSE) experienced a nice little bump.  It’s up about 35% in the last 11 days (rising from .13 to .20) although EAT is known mostly for chocolates and vape oils.

That didn’t stop the EAT share-holders getting on message boards and expressing their excitement about the opportunities in cross-pollinating the beverage industry with weed ancillary products. 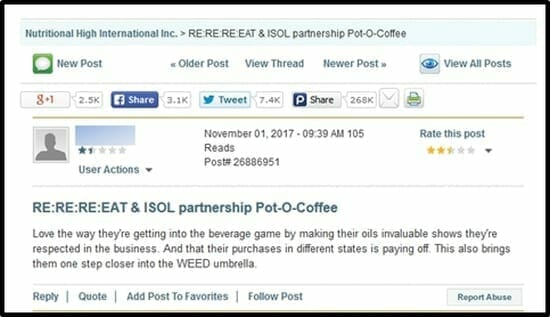 Why paddle when you can just push your canoe into the water and float downstream?

Sure enough, on November 8, 2017 EAT announced that it will be entering the beverage market via a partnership with Xanthic Biopharma to manufacture and distribute “cannabis-infused powdered drinks”, fruit drinks and “sport drinks” [emphasis ours].

Sport drinks?  Nothing like getting  wasted at half time during your Sunday soccer pick-up game.

This partnership generated a new flurry of thoughtful analytical comment on the message-boards: 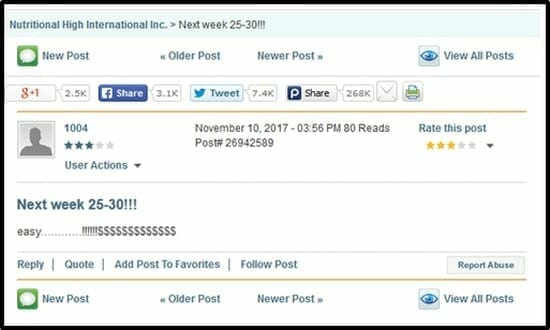 The route from chocolates to beverages may be navigable – but we can think of a couple of shorter pathways.

1 Tinley Beverage (TNY.C), is an established marijuana drink com­pany with a THC-infused core product line is known as, “The Tinley Collection.”

Tinley’s other product, Hemplify, is a non-THC health drink containing hemp stalk, terpenes, essential oils, and other non-psychoactive constituents.  The product is sugar free, vegan, non-GMO, gluten-free and is jammed with Vitamins C, D and B12), Omegas and electrolytes.

On October 25, 2017 Tinley released an operational update, announcing that Hemplify, “is currently being setup for shelf placement at a 14-store premium grocer, representing the Company’s largest customer to date.”

The chain offers a line of CBD products in locations in Los Angeles and throughout Southern California,” stated the press release, “The Company has also placed Hemplify in a 4-location natural grocery store and café chain, as well as in numerous independent grocers and convenience stores throughout Los Angeles and Orange Counties.”

Tinley’s has made strong inroads into the retail market since we first starting talking about them and the stock price has doubled in the last six weeks.

“Tinley’s consumers can enjoy an experience that more closely resembles the social and psychoactive effects of alcoholic beverages. This more directly supports the consumer value proposition of the Tinley ’27 alcohol-inspired product line. The technology has been incorporated into Tinley’s latest formulations, and the company remains confident that it will go into production in the coming weeks.”

In the race to market, Tinley has a significant head-start.

2. DOJA (DOJA.C) is another weed company well positioned to create future revenues in the beverage market.

On the surface, DOJA is a just new Canadian leaf grower with big ambitions.

“Our growers focus on bringing out the fullest expression of the plant’s genetic potential and the love and hard work they have put into their craft really shows in our first four strains,” stated Trent Kitsch, CEO of DOJA. “Post-harvest, our flowers were expertly hand-trimmed, hang-dried and artisanally cured.  Our handcrafted approach is aimed at producing the finest cannabis with exceptional aroma, flavor and effects.”

But there are two other things going on with DOJA, worth noting.

Firstly, the company has strong branding DNA which will be necessary to create a beverage that will get onto the shelves, and then later – be removed from the shelves – by customers.

We are talking about men’s underwear.  This is not small potatoes. The underwear market is worth a couple of billion dollars.

Cracking the underwear market is like trying to put a new soft-drink on the supermarket shelves. Basically impossible.  But Kitsch did it.

This is how you brand a weed company. 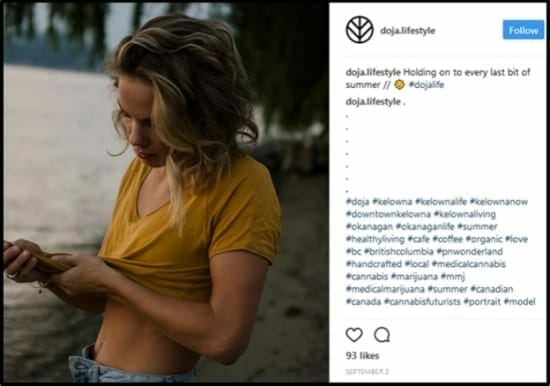 The second reason is that the Kitsch family operates a wildly successful winery in Kelowna, BC.

“The Kitsch family’s Okanagan roots stretch back to 1910, when Kelowna was still a small, lakefront pioneer settlement. Four generations later, this entrepreneurial family takes great pride in helping to shape the past and the future of the Okanagan Valley.

With a little help from some friends, the young family transformed overgrown fields into lush vineyards, set on historic apple orchards that originally served as the Kelowna Land and Orchards (KLO) headquarters.”

The booze business, like the weed business, is destined to exist in a matrix of local and federal regulations.

When two worlds collide, it’s instructive to recognise which players are already straddling both realms.

Full Disclosure:  Tinley and DOJA are Equity Guru marketing clients and we own stock.