The winds of change are blowing through La Belle Province, and it’s blowing in the scent of legalized cannabis. You would think Quebec would be relaxed around weed, with its relaxed liquor laws, and erm, open society. Surprisingly, there’s a very puritanical streak also running through society around drugs.

Whats interesting is social change seem to coming to Quebec, as legalization looms. A couple of stories this week caught my eye.

Quebec media is agog over the just-announced cannabis festival to be held in the summer of 2018, Quebec’s first. Major outlets are breathlessly reporting on the event. Of note the tone is less ‘Think-of-the-children’ and more ‘this-is-a-serious-event-to-smoke-and-educate-responsibly’. So the conversation seems to have advanced past the pearl-clutching stage.

In a more serious vein, RCI, the French language arm of the CBC is currently doing a series on the legalization of cannabis across Canada, with some great info. If you can handle the lack of subtitles, it’s definitely worth a watch.

A company called Nouveau Monde Graphite (NOU:C) is getting a lot of good press about its operations in Quebec. A local piece this week is gushing about it’s eco-friendly approach to extraction, while a similar positive piece was featured in La Presse earlier in July (which is a big deal). The La Presse piece notes even though production hasn’t started, there’s already a Chinese battery manufacturer sniffing around.

The positive coverage is having an effect as you can see below, up nearly 50 per cent in the last little while.: 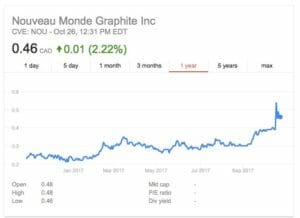 Nouveau Monde’s website is in english, and you can check out their technical details. This may be an undiscovered gem, I haven’t seen a lot of coverage in english about this one.

Quebec Update is our semi regular dive into what’s up over thar. Summarized and translated by me.