Let’s pretend you’re a junior explorer with a couple of million bucks in the bank, and you’re trying to figure out how to spend it.

The super-objective of all junior explorers is to show investors, banks, hedge funds that you hold the mining rights to an “economic resource.”   An “economic resource” simply means that you have a product (gold, silver, iron, nickel, cobalt, lithium etc.) in the ground that can be extracted and processed at a profit.

If you’re a copper explorer with no copper – that won’t work.

If you’re gold explorer operating in a country with an 80% corporate tax rate – that won’t work.

If you’ve discovered a lens of platinum the size of a laundromat 6 kilometers beneath the North Polar Basin – that probably won’t work.

We could provide more examples of failed efforts, but you get the idea.

Most of the time, exploration is a 2-step mantra: 1. Identify drill targets, 2. Drill.

It’s the difference between: “That looks like a jelly bean” and “Here is my jelly bean.”

When junior explorers start drilling, they need to get it right. And if they get it wrong, they need to stop as quickly as possible – and drill somewhere else.  Because drilling is expensive and investors will sell shares if they think the company is wasting their money.

So it’s interesting when a junior explorer decides to expand an existing drill program.

This is exactly what happened on July 19, 2017 when Castle Silver (CSR.V) announced that it is expanding the drilling program at its 100%-owned Castle Property from the initial 1,500 meters to 2,000 meters.

Now, this could just be a geologist’s hunch.  But one’s thing is for sure: an expanded drill program is a signal that the company is gaining confidence in its mineral asset.

It’s good to have that information as early as possible.

CSR has a fascinating history, dating back to 1904. It is exploring and developing a network of past producing silver and cobalt mines in northern Ontario including the Castle Silver-Cobalt Project and the Beaver and Violet mines near Cobalt. 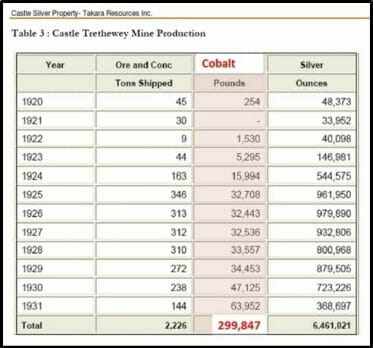 From the press release:

Phase 1 drilling from surface at the Castle Property, which began about 10 days ago, is proceeding very well and has been expanded to 2,000 meters from 1,500 meters with approximately 20 drill holes expected to be completed.

Multiple surface samples have been collected from the Beaver Property, which is in a different location than the current drill program. CSR owns the Beaver Property 100%.  It is another former high-grade silver producer with untapped cobalt potential.

An initial 82-kilogram sample of vein material from the first level of the Castle mine returned values of 1.48% cobalt, 5.7 g/t gold and 46.3 g/t Ag (nickel results pending);

“The high cobalt and gold values from the underground bulk sample support our thesis that there is much more to this past producing mine than just silver,” stated CSR President and CEO Frank J. Basa, “Our crews have taken an additional large sample from the same area to be tested by another lab in order to verify these stunning gold assays.”

After this official statement, CSR warned investors that the underground assay results are based on selective samples “and should not be considered representative of mineralization underground or elsewhere on the property.”

Warning accepted.  But all the hard data coming out of CSR is encouraging.

Apparently, those chip samples were not assayed for gold.   In light of the Beaver Property assay results, they are now being re-checked for possible gold content.

CSR recently closed an $882,500 private placement with strategic investors at 20 cents per unit.  Since March, CSR has raised nearly $2.6 million in hard dollars.  They are sufficiently funded to advance key strategies. 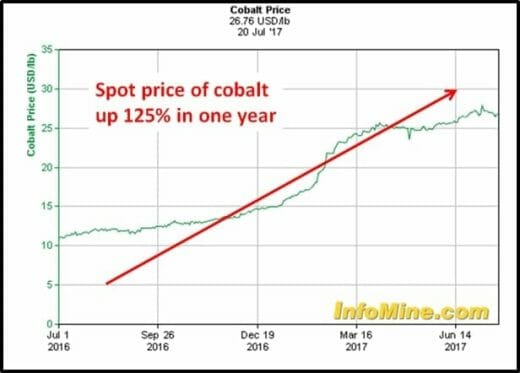 Lithium ion batteries are the blood stream of modern life.

Unless you make a living herding camels on the Saharan Desert, you are fueling the demand.

A micro-cap Canadian cobalt junior with an expanding drill program is a good way to play this macro-trend.

FULL DISCLOSURE:  Castle Silver is a new Equity Guru marketing client.  We are also investors in the company.