In 1983, a newly-graduated metallurgical engineer named Frank Basa got a job working at the Castle Silver Mine in Ontario – then operated by Agnico Eagle (AEM.TSX).  The mine was situated about 80 kilometers northwest of the historic Ontario Cobalt camp.

The young metallurgical engineer (Basa) is now the CEO of Castle Silver (CSR.V) which controls the old Castle Silver Mine. Cobalt is a critical ingredient in lithium-ion batteries.  Prices have risen 500% since Basa first worked in the mine.

The market believes that Basa is the key to unlocking value in this silver cobalt project. 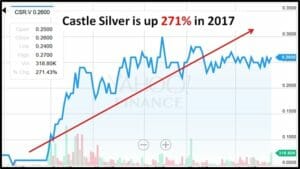 Is “the market” always right?  Absolutely not.  In 2008 “the market” thought oil was going to $200 a barrel (it’s currently at stalled at $43). We recommend skepticism as a default mode.

So before we drink the Kool-Aid – let’s rewind the tape.

According to Canadian mining folklore – in 1903, an Ontario railway blacksmith named Fred LaRose threw a hammer at a loitering fox.  The hammer missed but chipped off a piece of shiny rock.

LaRose gave the rock to some buddies who thought it was nickel. When LaRose’s friends confirmed it was silver – word leaked out – and an army of prospectors descended on the area.

One of these prospectors was William Trethewey, a former real-estate developer.

“I came to a bluff where the point ran down into a swamp,” recalled Trethewey in his 1904 diary, “I had to wade into the water to get round its western face. I could not see the face of the cliff until I had got out about twenty feet, when I saw a black streak on its face I knew it was a silver vein.”

“My first anxiety was to see if anyone had been there before me,” continued Trethewey, “There were fellows down at camp who would have made a wild rush up there if they had known. So I threw sticks and moss over the rock where I had chipped it, and came down to my tent and quietly had my tea.’”

Trethewey staked his claim and excavated an open cut 50 feet long by 25 feet deep, from which he removed 340,000 troy ounces of silver. Astonishingly, the vein was no more than eight inches thick at any point and it was very close to surface. 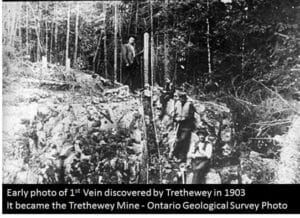 The veins discovered by Trethewey eventually produced over 40 million troy ounces of silver.  But as you can see from this 1923 Globe & Mail news item – there was zero interest in the cobalt. 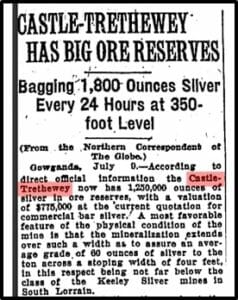 The mine was in production from 1920 to 1931 and produced 6.5 million ounces of silver. But then the price of silver bottomed out: 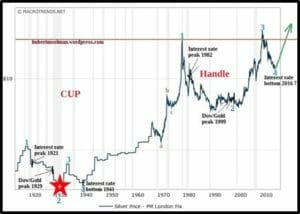 Leading to the closure of the mine as stated in this 1931 Globe & Mail article. 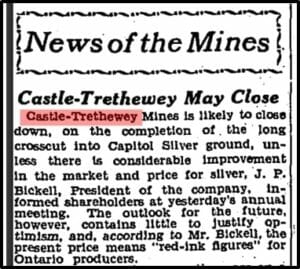 CSR is now in complete control of the high-grade Castle Silver property, including the former producing Castle #2 and #3 shafts, which were part of the Castle Trethewey Mining Company.

The historical data confirms that there is a significant amount of cobalt there. 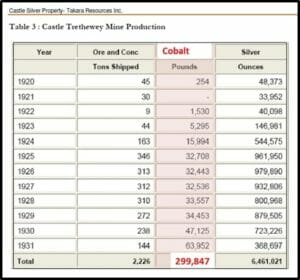 The three shafts of the Castle Silver Mine were held by different companies over the years.  Some of the shafts are connected via tunnels. The chain of ownership is complicated.  Sometimes mining occurred on one property but the ore was brought to the surface at a shaft on another property.

Banks won’t finance a mine based on “historical data” so CSR must begin proving up the resource from the ground up.

High-grade mineralization was encountered in 3 of the 5 initial chip samples:

It turns out this process may also be useful in recovering cobalt from recycled batteries.

A reminder:  this tide is rising: 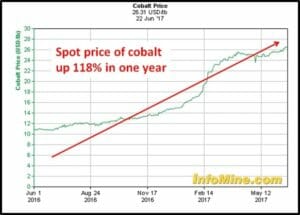 In the early 1980’s Agnico Eagle abandoned cobalt in its extract and tailings.

Basa – young, ballsy and brilliant – figured out a way to extract 13,000 tonnes of cobalt from Agnico Eagle’s dumpster.

Despite the recent stock price surge, Castle Silver is still a micro-cap company with a stock price of .26 and a market cap of $11.5 million.

To paraphrase the late great American novelist Raymond Chandler, “Basa has a cobalt resume to make a bishop kick a hole in a stained-glass window.”

The CEO of Castle Silver was right in 1983.  If he’s right again, this is a once-in-a-lifetime wealth generation opportunity.

FULL DISCLOSURE:  Castle Silver is a new Equity Guru marketing client.  If we sound excited, it’s because we are.