The death of coal greatly exaggerated

Right now, coal is about as cool as pushing people into swimming pools. Remember how much fun that was before everyone had an iPhone in their pocket?

Yeah, no ones arguing there, but despite the popular narrative, canaries everywhere have reason to be nervous. To paraphrase Mark Twain, the death of coal has been greatly exaggerated.

The big questions is: Will coal continue to climb the wall of worry or is it about to roll over?

Anyone? Bueller? Nobody seems to have a clue. (The head honcho here at Equity Guru, Chris Parry, has made his views clear and when recently asked hadn’t changed his stance on the issue. So noted)

Opinions aside, without further ado let’s go to the videotape, or in this case, a chart.

The Coal ETF (KOL.NYSE) has thrown off it’s shackles and gone on an absolute tear since bottoming in January 2016, providing fantastic returns for contrarians, just as we highlighted last October.

It’s always harder trading from the right-hand side of the chart and as such analysts are now scratching their heads and wondering if Trumps election win (which coincides with the recent high) was a classic Sell the News event. 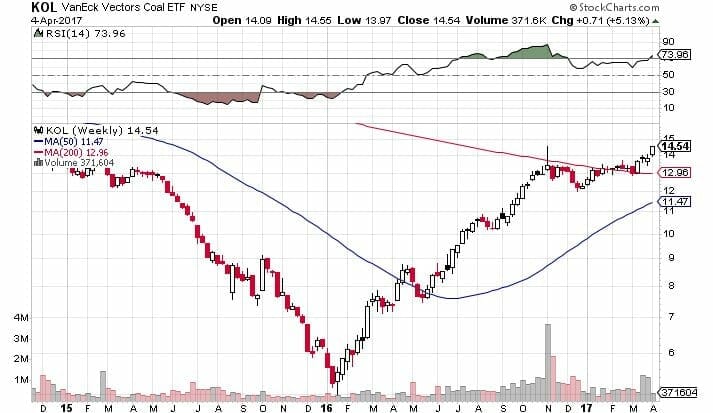 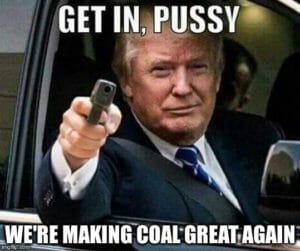 In case you’ve just woken up from a 6 month coma, here’s a quick recap of what you’ve missed:

♦ Trump won the election, as predicted by The Simpsons, and is now POTUS (Hang on that could be either fake news or an alt fact. Not the part apart Trump being President. Unfortunately that’s real). Apperently he had some help from the Russians. You can’t make this up, I swear!

♦ One of Trump’s first orders of business was to repeal Obama’s Clean Energy initiatives.

♦ Peabody Energy Corp (BTU.NYSE) made a return to the big board last week in New York after being in hibernation for a year. It’s stock closed at 27 bucks and change on it’s first day back.

Can Trump make coal great again? Not according to a recent article written by Michelle Nijhuis for National Geographic.

It’s hard to argue with her. While the global outlook for coal looks resilient, North America doesn’t appear to have the low cost, high grade producing mines that can compete globally.

The Akatsuki (暁) (Japanese word for “dawn” or “daybreak”) is a Liberian flagged bulk carrier built in 2014. She is currently somewhere off the coast of Japan and is expected to arrive in Samarinda, Indonesia in 6 days time.

What’s she carrying you ask? Not important. 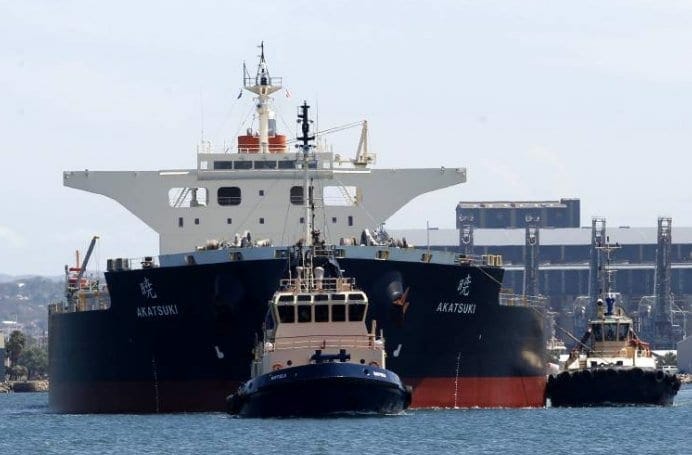 Size matters!
What is important is that 1,764 vessels just like her left the Port of Newcastle last year filled to the brim with coal, and in the process played their part in exporting a record 161 million tonnes of the stuff from Australia.

Not surprising then that the town of Newcastle, and the region in general, is seeing business confidence return after a stagnant few years. All on the back of increased demand for one of Australia’s top exports (2nd only to Iron Ore). 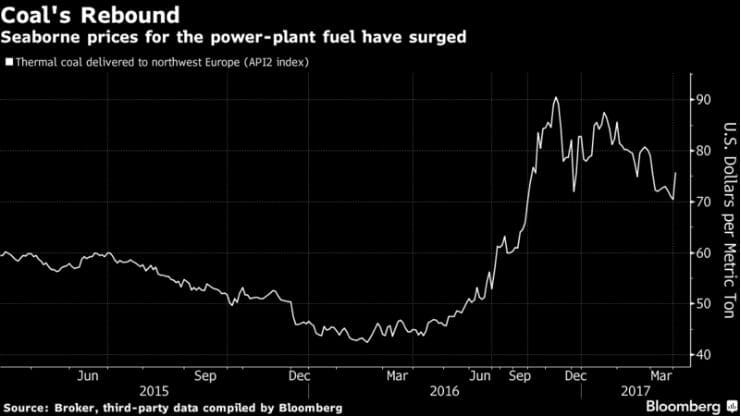 Aussie investors haven’t missed out either with Whitehaven Coal (WHC.ASX) handing a three-bagger to anyone who purchased it at the start of last year and forget they owned it. 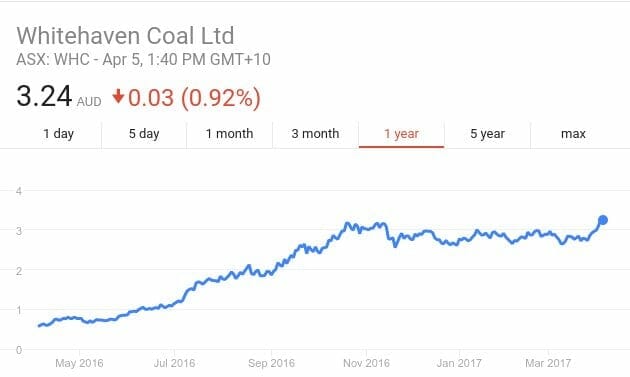 The Butterfly Effect? – Anyone planning a trip to the Hunter region to replenish their stock of Graveyard Shiraz would do well to book their accommodation shortly as prices will likely rise in the months to come, if they haven’t already.

One would expect that after the Paris Agreement and new OECD rules these countries would dramatically reduce their investments in coal projects, if not virtually eliminate this spending altogether. However, Japan and Germany both continue to consider investments in international coal projects. Japan is considering providing over $10 billion worth of public financing to support a series of coal power plants around the world – Jake Schmidt

As Japan discovered, when nuclear goes bad, it goes really bad. Especially when you build your power plant next to the ocean and a tsunami comes your way. 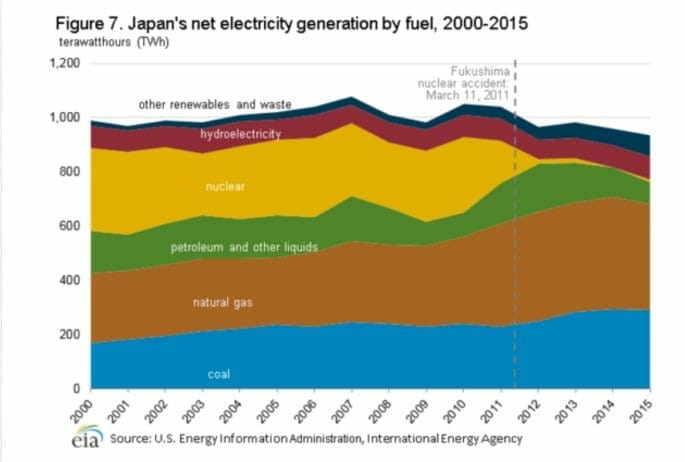 Even though six years have passed since the Fukushima nuclear disaster, the Japanese public have lost faith in nuclear power. Prime Minister Shinzo Abe, who took office at the end of 2012, says that Japan cannot do without nuclear power. Let’s not forget that a politicians primary job is to get re-elected, so convincing a wary population to embrace the atom once more may prove challenging.

G. H. Hardy described proof by contradiction as “one of a mathematician’s finest weapons”. It’s also a useful tool in the arsenal of a market technician, to validate (or refute) a market assumption.

Let’s take the other side of the argument and see how that plays out.

Assumption: Coal is weak
Implication: Either Natural Gas and/or Uranium should be showing strength.

Can we find any strength in these commodities at the moment? If so, that would be a warning sign that we have missed something in our analysis or market dynamics are askew.

Natty Gas hasn’t been kind to longs over the past few months.

This from Andrew Hecht at SeekingAlpha, a site with serious street cred in the financial arena.

Even though natural gas has fallen like a stone over recent weeks, the price is not even close to oversold territory. Even the relative strength measure tells us that the energy commodity has more downside ahead as it has not reached a level that is oversold. Open interest is rising and price is falling, which is a validation of the current downtrend. All signs point lower for natural gas now and the worst news may be that the winter season is ending.

Winter is generally the season of peak demand for natural gas, but this year demand has been anything but peak. It has been an unusually warm winter across the United States, and that is one of the reasons why inventories have been at very high levels throughout the season. The other is massive reserves. 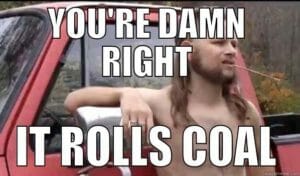 Can’t see anything that suggests coal is about to roll over right now. In fact as we go to press Cyclone Debbie has just recently smashed into Australia’s east coast prompting BHP (BHP.ASX) to call force majeure and spiking thermal coking coal prices further.

If you were smarter than us and added some coal to your portfolio in 2016 you might want to take some money off the table now.

If you missed the boat and are on the sidelines pondering an entry then caution is advised. The low lying fruit has well and truly been picked by those clever contrarians.