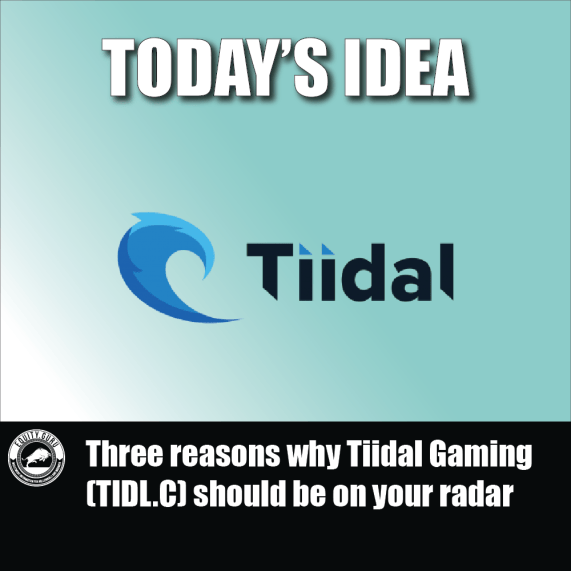 Three reasons why Tiidal Gaming (TIDL.C) should be on your radar

In years past, gambling was considered to be something of a dubious past-time.  It was always connected with something socially negative, like degeneracy or illegal activities, and being recognized as a gambler (or a purveyor of gambling) was a quick route to get on law enforcement’s radar. Now that’s changed and for the better.  The government’s eased off the moralizing (at least on this issue) and maybe recognized that responsible adults shouldn’t have their hands held and that maybe they can make their own decisions.  Progress!

And that’s generally a good thing.  It means there’s revenue and profit options for companies that want to connect to customers and enough customer demand to cut out the shady middlemen and make the industry something worth looking into. Now the dominos are falling one by one and Canada’s opening up their iGambling market, which is good for you as an investor, because it opens up options that weren’t available this time last year.

Tiidal Gaming is a media and technology platform that connects esports and gambling. It’s primarily revenues pulls are its two subsidiaries, Lazarus Esports, it’s proprietary e-sports team, and Sportsflare, which is a platform that blends esports with novel gambling applications.

In fact, Sportsflare is one of the three reasons you should keep Tiidal on your radar so let’s get into it.

We’ve written extensively about this company in the past five or six months. It’s not just like any old sportsbook. It’s a sportsbook for the esports era that acts as a point of connection between you, the viewer at home, watching your favourite streamers play on your screen and what’s actually happening. It allows you to bet on the action. If you think (esports celebrity streamer) Ninja’s going to score a headshot in the last minute of the game, you can place that bet and see what happens.

But SportsFlare keeps on getting better.

Earlier this week, they put out a flash betting solution called Esports 3.0.

“So, what are flash bets? According to Tiidal, flash bets will allow bettors to place wagers on in-game outcomes, numerous times within a single match. In other words, rapid-fire betting. With this in mind, Tiidal’s latest innovation will further strengthen the Company’s position in the eSports betting market. Keep in mind that the global eSports betting market was valued at USD$66.98 billion in 2020.”

Some of the popular titles include League of Legends and Dota 2.

Sportsflare developed this platform to remove the disconnect between live wagering odds and data streaming. The end result is flawless in-play e-sports betting that offers visualizations of games in real time with dynamic odds based on game play. Esports 3.0 provides sports books with single integration to its full suite of listed products, including Betbuilder, MicroMarkets, Esports Odds and Bet-on-Yourself, which will come standard with the new platform.

The second reason Tiidal should be on your radar is that they’ve not even a year old and they’ve already gotten themselves recognized by the rest of the industry. Tiidal Gaming participated in the SiGMA Americas this year, and while that’s not normally a cause for celebration, the fact that they were nominated as a finalist for the ‘esports Product of the Year’ award definitely is.

The SiGMAs are one of the largest iGaming trade shows in North America. It’s a place where companies, executives, investors, thought leaders, and media agencies can network within the global online industry. There’s also awards that celebrate the top gaming companies in the industry.

The SiGMAs were held in Toronto this year at the Enercare center and there’s plenty of good reasons for that.

The company didn’t win the award but that’s beside the point. Sportsflare is pushing the envelope and getting noticed by other industry insiders, and now that they’re working to add new functionality, it’s likely they will be nominated next year, and maybe even win.

The strategic importance of Ontario

Finally, the third reason Tiidal belongs on your radar is because they’re among the first companies to get into the newly open Ontario market.

The Canadian sports betting landscape changed back in April when Ontario flung open the gates to the iGaming market, giving Ontarians a chance to place their bets using commercial sportsbooks.

The launch started with B C-218, which kicked over the first domino that eventually lead to single game sports betting to go live last year, but kept folks in Ontario limited to one provincially-run betting option. And if there’s anything we’ve learned from the cannabis run in Ontario, it’s that the government isn’t going to run it well.

There was always black markets options available and folks in Ontario have been using these for ages. Usually local bookmakers and offshore sites. The Canadian Gaming Association estimates $2 million (CAD) worth of daily bets are placed through organized crime and illegal offshore gambling sites in Canada. Now private sportsbook operators could end up biting a dent out of the black market options as the province leaves the old ways behind in favour of a regulated market.

When you factor in that Canada’s gambling industry pulled in $2.64 billion in revenue in 2021, with $1.2 billion being from online gambling alone, it’s not much of a surprise that companies like TIDL would want to get in on the action. There is the suggestion that a lot more revenue would have been generated if not for requiring a provincial government to license all gambling providers.

Regardless, Tiidal successfully jumped through all the regulatory hoops with the Alcohol and Gaming Commision of Ontario (AGCO) to get their Gaming Related Supplier – Manufacturer’s License well ahead of the go-live date for iGaming.

This company has only been around since November. Think about that for a moment. They’re still in an extremely early stage of their development and they’re already out there winning awards and bringing value.

Here are a few other specifics for your consideration:

The biggest, most curious point about this is that they have no debt and a $1.6 million cash position. Right now they’re in Ontario and likely going to see strong revenues from the next set of financials. If they’re not on your radar by now then they should be.