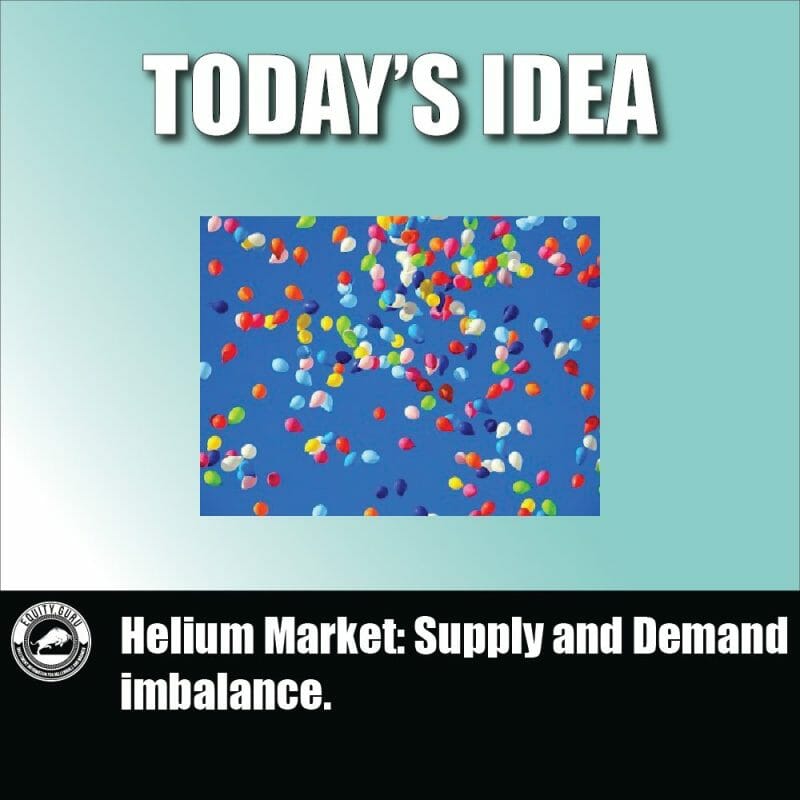 Helium the commodity (rare gas), and not helium (HNT) the blockchain technology, is the second most abundant element in the known universe and accounts for about 25 percent of the atoms in the universe. Hydrogen is the most abundant element in the universe, accounting for about 75 percent of its normal matter, and was created in the Big Bang. Although helium is a common element it also holds the accolade for hard-to-find elements.

In 2019 James M. Harrison, Chief Executive Officer of Party City (PRTY) the largest retailer of party goods in the United States, Canada, and Mexico stated that:

“Overall, our first-quarter results were largely in line with our expectations on the top and bottom lines, inclusive of the helium shortage, which negatively impacted our latex and metallic balloon categories.”

Mr. Harrison continued, “Most importantly, we have signed a letter of agreement for a new source of helium which, subject to final execution of a definitive contract, would provide for additional quantities of helium beginning this summer and continuing for the next 2.5 years. We believe this new source should substantially eliminate the shortfall we are experiencing at current allocation rates and improve our ability to return to a normal level of latex and metallic balloon sales.”

The company also announced that it planned on the closing of approximately 45 of its approximately 870 Party City locations in 2019. This number is way above their “normal” 10-15 closures per year. 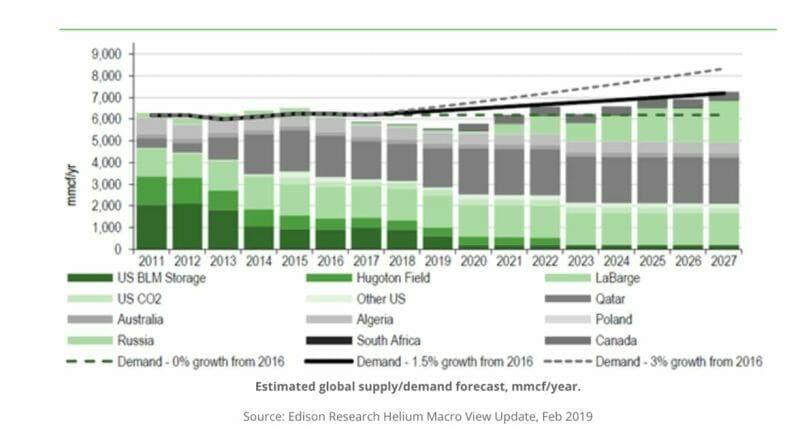 The global helium marketplace continues to be under noteworthy supply pressures, as demand continues to surpass supply. In North America, there has been no major new source of supply impacting the market for numerous years. The much-needed new suppliers in the short term, aiding to fulfill a supply void felt from the removal of the United States Strategic Helium reserve in 2018. This strategic reserve held over 1 billion cubic meters of helium gas. The reserve was established with the enactment of the Helium Act of 1925.

Demand Side Economics and Price Adjustments

The enduring divergence between supply and demand has produced intense price movement since 2018, with prices rising by over 100% for this vital and irreplaceable inert gas. 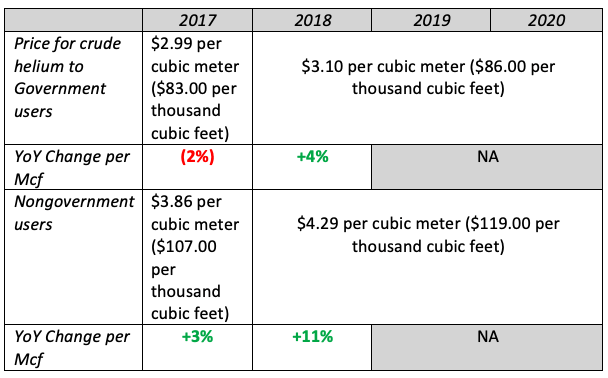 The last year helium prices were posted by the Federal Government was in 2018. The estimated price for the private industry’s Grade-A helium was about $7.57 per cubic meter ($210 per thousand cubic feet), with some producers posting surcharges to this price.

Helium is valuable due to its completely inert nature (its ability to be like me when it comes to doing work, sluggish and unresponsive to stimuli). It is the only element on the periodic table that will not bind or react with any other element. Its properties also allow it to have the lowest boiling point on any element, and it can remain as a liquid until near absolute zero.

These properties allow helium to act as the most effective super coolant on the market as well as a superconductor and purification gas that has no rivals. Helium is a non-substitutable and non-renewable commodity needed in many high-tech and health care industries, with specific applications in rocketry, semiconductors, electronics, and health care.

That takes care of the question of prices and uses (demand) of helium, but now the big question is where do we obtain this elusive gas?

It turns out (go figure!) that new helium is created every day in very teeny amounts inside the Earth’s crust as a by-product of radioactive decay (see formula below for clarity)

And like other gases below the Earth’s shell (i.e., natural gas), helium gets stuck in geological formations in economical quantities.

Today, much of the helium is either produced as a by-product of natural gas deposits or from helium-primary gas deposits with concentrations up to 7% He. (source) 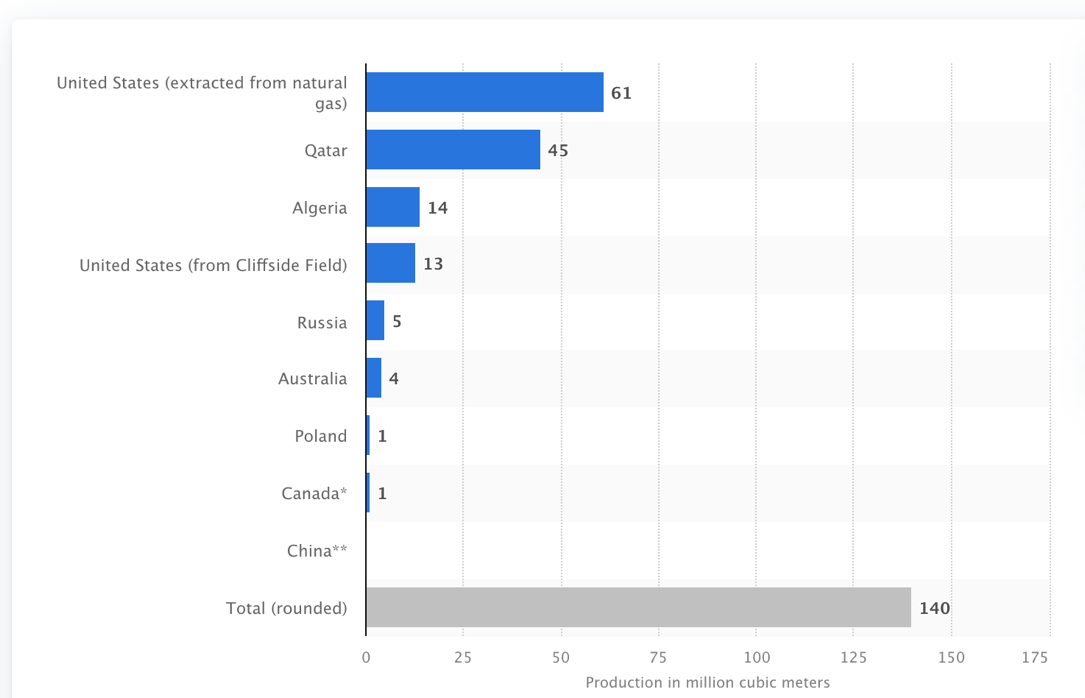 According to Statista, the total global production of helium was 140 million cubic meters in 2020. Of that 140 million, 61 million came from U.S natural gas,45 million from Qatar,13 million from the U.S Cliffside Field, and less than 1 million from Canada. Saskatchewan is a known helium producing region, with multiple wells presently producing, and is a tactical location for continued exploration and development of helium. Helium is created through the breakdown of uranium and thorium and Saskatchewan is well known for having some of the highest uranium concentrations in the world.

Recently a few firms have gone public in Canada with the intent of taking advantage of this gap in the market.

The first of these ‘new suppliers’ is First Helium Inc (HELI.V). Business model aside whoever named this company should get a bonus from the company $9 million cash pile. HELI has its principal activities of acquiring, exploring, and developing helium property interests in Alberta, Canada. In total the company owns 32,000 hectares of Alberta Petroleum & Natural Gas rights and on July 12, 2021, the Company began trading on the Exchange under the symbol HELI and has about 100 million fully diluted shares out.

With a market cap of $C15.7 million, cash of about $C9 million, and $C2.5 million in debt the company seems ready to deploy working capital to meet its operational growth plans and its general corporate activities for the next twelve months. As of June 30, 2021, the company had a working capital balance of $C7.2 million.

Next, we have Global Helium Corp (HECO.C) which is an exploration stage company focused on (1) the exploration and development of its existing helium permits on lands in Saskatchewan near other helium operators and producers and (2) acquisition of additional helium properties for the purposes of further development and production.

The company started trading on the CSE on May 19, 2021, and the team has since added additional acreage to create three core areas and now holds 581,500 acres in Saskatchewan. The company’s targeted capital structure on June 30, 2021, is 100% shareholders’ equity. The operators believe that such a capital structure is the most suitable for a pre-production exploration company. The firm has a total market cap of $C67 million, with $C4 million in cash and no debt on its balance sheet.

A significant measure used by the firm in assessing capital adequacy is the expected number of days of operations that can be funded from current working capital. Capital levels are deemed sufficient if they can fund the balance of the annual exploration and development goals and fund corporate overhead expenses in the near term. The firm has $C5 million in current assets and 114K in current liabilities meaning they have a working capital position of about $4.8 million.

The next supplier is also in the Saskatchewan region. Royal Helium Ltd (RHC.V) is focused primarily on helium production from its helium permits and leases in Saskatchewan. RHL is one of the largest helium lease and permit holders in North America, with land that was acquired both from the Crown and via freehold lease agreements. The firm currently has an auction valuation of $73 million, with a cash pile of $C15 million and total property and equipment of about 10 million bringing their total assets to close to $C26 million.

It holds approximately 400,000 hectares of prospective helium lands in southern Saskatchewan and has a working capital position of $15.66 million and an estimated overhead of $C3 million per year, working capital needs of $C500,000 per year and as of the last twelve months capital expediters were at $C7 million. Going with the same operational theme as Global Helium Corp, Royal Helium Ltd also seems well-positioned to fill the supply side issues and meet capital structure targets.

It should be noted that insiders have been net buyers of their own stock in 2021.  Wallstreet believes that there are usually many reasons to sell and only one reason to buy, you like the stonk!

And finally, the last firm on my list is Imperial Helium Corp (IHC.V). IHC is the smallest firm with a market cap of $C18 million, cash of $10.8 million, and total liabilities of $C280,000. If we compare the market value and the rough liquidation value for the firm, IHC common is trading a premium to assets (18mm vs 13mm).

The company has no debt on its books and a majority of its exploration and evaluation assets are land, drilling, and geophysical assets tied to its Lease Issuance and Option Agreement for lands that are prospective for natural gas and helium, located in Alberta, Canada. They like all the other firms do not have sales yet and they spent $C6 million over the last 6 months on corporate overhead.

They too have enough cash to cover their corporate overhead, working capital, and capital expenditure needs for the next 12months.

In conclusion, the shortage has mostly been due to the fact that our existing sources for the elusive gas have been in decline or have been depleted by the excess demand for the gas. In simple terms, supply is going down and demand is going up. As we have already mentioned the element is extremely rare and very difficult to economically capture in large volumes. This barrier to entry has been a major setback for the supply side for years with the government having to get involved for a brief period.

But there is light at the end of the tunnel as new firms enter the market in mineral-rich strategic locations like Saskatchewan and Qatar. The risk-reward profile leans on the conservative side, meaning if the explorer does not find any economic helium, they have a high chance of running into some uranium (up 65% for the year) or natural gas (up 79% for the year) on the way. Jokes aside this gap between supply and demand can be seen as an opportunity for any firm that’s able to extract, store and commercialize its operations at current private market prices. This is a great opportunity for the courageous capitalist.