WallStreetBets and the meme stock crowd are causing more short squeezes. Things are a bit different this time. Doesn’t seem to be getting the financial media hype like last time, and to be fair, they are choosing to focus on inflation data and the Federal Reserve Meeting next week. With not as much eyes scrutinizing the meme crowd, social media crowds are dubbing this the silent short squeeze. 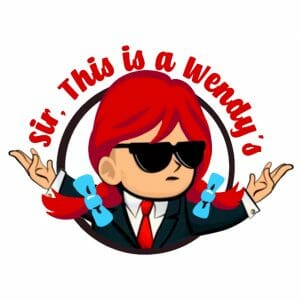 And it is a good term. I am seeing some stocks pop that I would not have expected. The WallStreetBets crowd still hunts for heavily shorted stocks. But I think it is prudent to mention that it could also be institutions covering their shorts. They see what’s happening with AMC and GME (again), and don’t want to be on the losing squeeze side. Why wait to be squeezed? Just close shorts, and take profits. Remember, closing a short requires a buy order…hence the short squeeze.

In this Market Moment article, I will do a rundown on a lot of popular WallStreetBets charts. I will also provide data on the current short provided by shortsqueeze.com. Expect to see a lot of gap up pops. Just looking at WallStreetBets, the top daily tickers are BB, CLOV, CLNE and WISH. GME is making some headlines because they release earnings today.

Before jumping into charts, I just want to remind my readers on a signal that we have been waiting for. If you recall, we were keeping our eyes on the Russell 2000. The US Small Caps Index. In order to confirm that the retail/meme crowd was rotating out of crypto’s and into stocks, the Russell 2000 would be popping higher. Well: 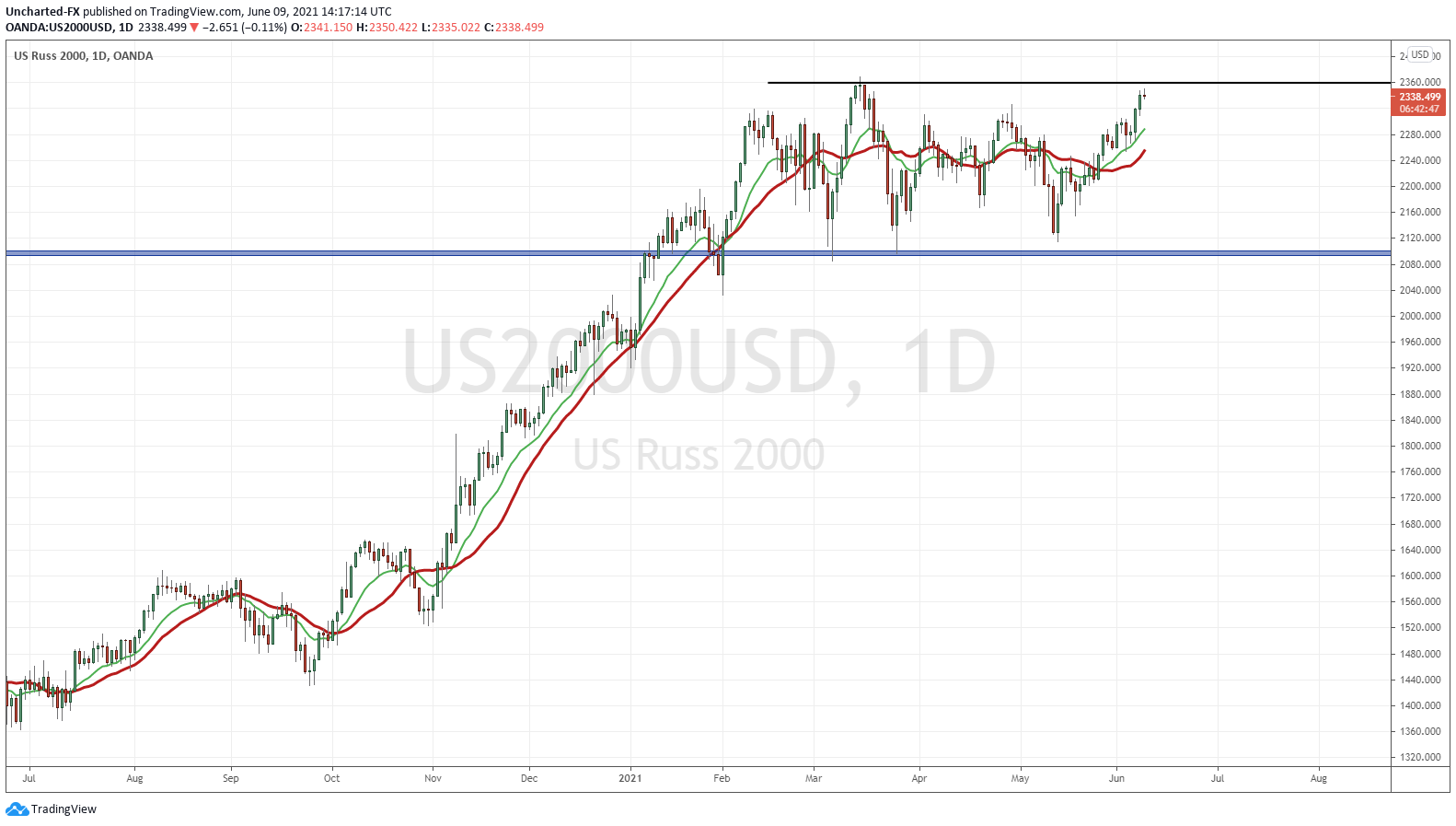 So far, we are all gucci. The Russell is testing previous record highs. Just a few weeks ago, I was warning that the Russell could breakdown from its range. How things change. Or to put it another way: how many rotates quickly.

Sure, the Russell could reject and we drift lower, continuing to range. But I would be watching for a breakout sometime next week. Just wait for the Fed meeting. We can see some volatility from that.

Before we look at the charts, there is one more important point to mention. Notice on WallStreetBets, there are more posts where people are telling others to be smarter this time. To take profits, rather than believing in moves to the moon. This is a major difference in sentiment from last time…and also why some pops and moves are seeing retracements quicker. People are taking profits, which is never a bad thing in trading.

I also have to say that a lot of these stocks that have popped are now considered overvalued using traditional valuation calculations. These meme stocks can continue to run, but eventually, they will get a dose of reality and correct to fair value.

GME came back alive. When AMC was moving, I was mentioning over on Equity Guru’s Free Discord Trading Channel that we should watch GME. The technicals just weren’t giving us a signal. They do now. To add to the drama, GME reports earnings today post market. 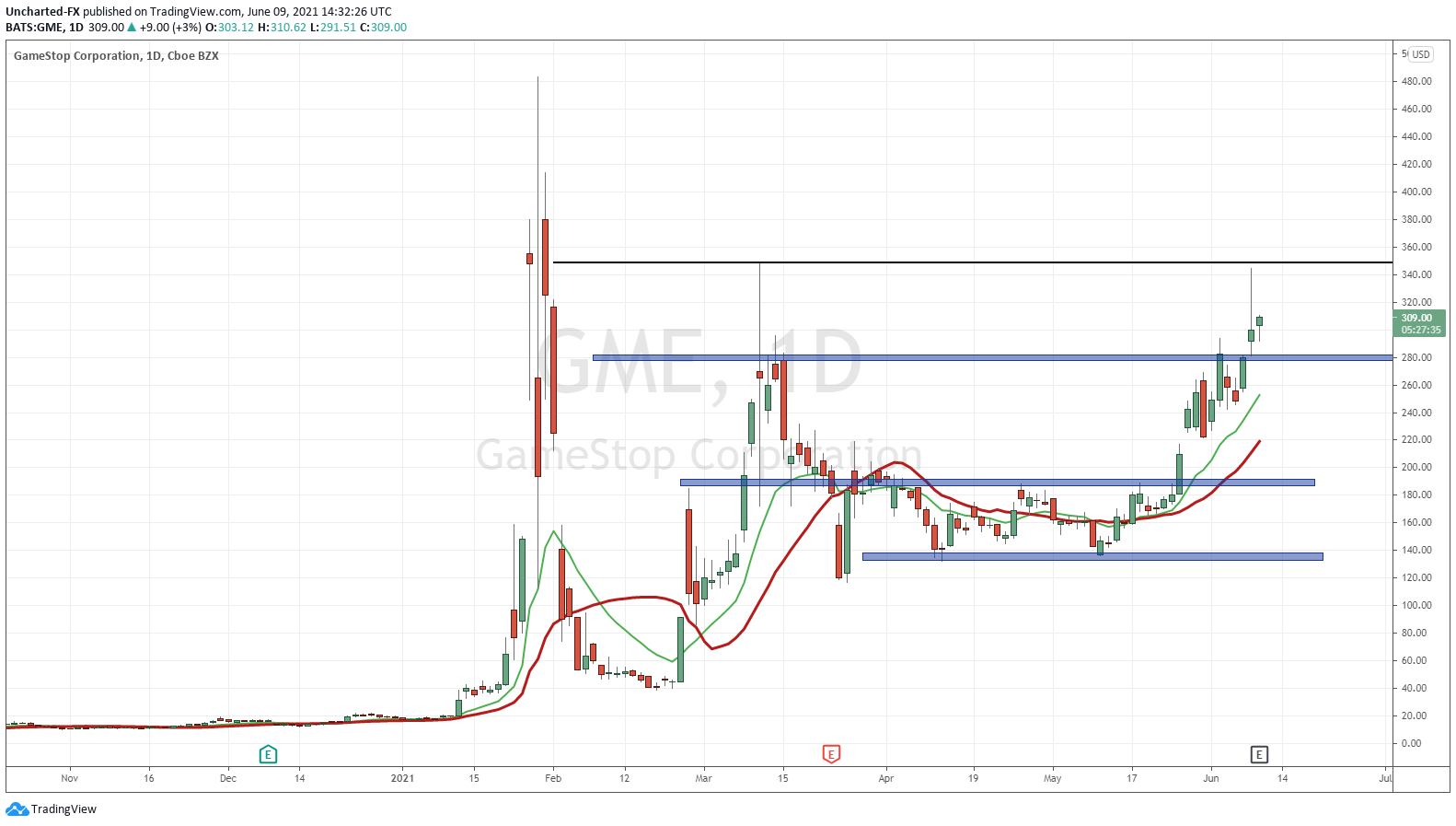 It has done it! GME has broken and closed above a major resistance zone!

GME confirmed a major breakout yesterday. It finally closed above $280, a zone that has been resistance since March/April. Note too how prices yesterday reached our next resistance around $350 before selling off. For those that were quick enough, you could have entered positions near the retest of $280. Going forward, $280 will be key support. This needs to hold for further momentum. Expect buyers to defend. $350 is resistance to the upside, and then previous all time highs at $483. 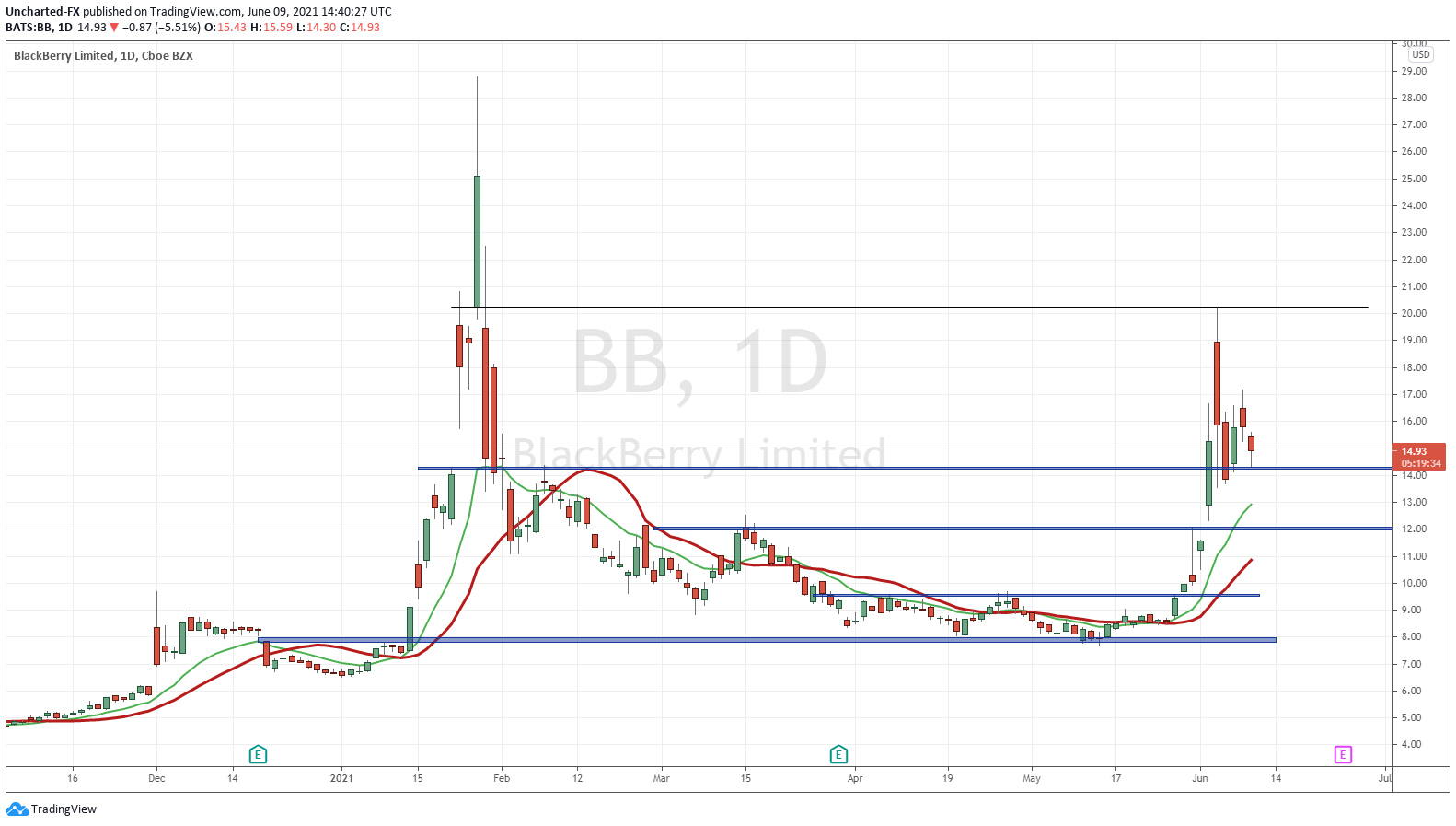 BlackBerry is still one of my favorites, and one of the top mentioned stocks over on WallStreetBets. You all know my opinion. I like the fact that it is moving since I am long, but I just don’t like the title meme stock on this one. BlackBerry has true positive fundamentals going forward especially with self driving cars and their QNX system.

BlackBerry had a nice pop alongside AMC. In fact, many WallStreetBets traders were taking profits on AMC and buying the cheaper BlackBerry. We had a nice move to $20 on the US listing, only to sell off. The sell off takes us back to the major support of $14.00. We are currently retesting this zone. Prices must hold above. As you can see, we actually did retest $14.00 just a few days ago. We got a pop (green candle) but the momentum just hasn’t continued. This is a worrying sign. BUT as I said, if this is a longer term hold based on fundamentals, then accumulating some shares around here is not such a bad idea. 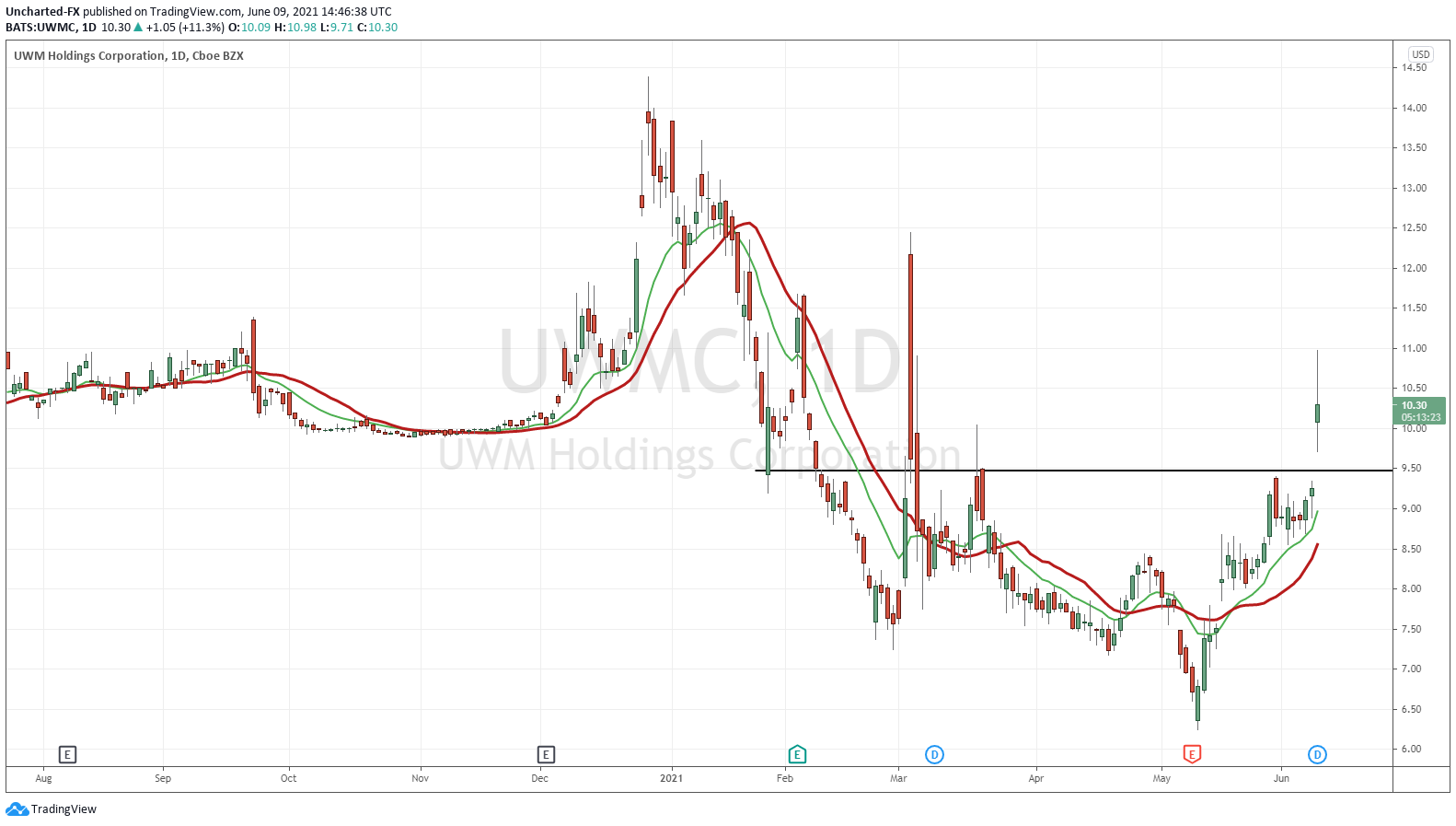 UWMC is the big one mentioned on social media platforms yesterday. It had a nice pop today and the stock is still up 12% at time of writing. They pay out 0.10 dividends tomorrow, so that helps, but the move is based on a large short position. 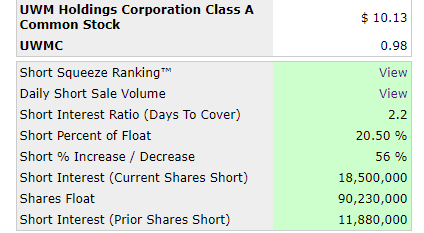 We have a bit of a reversal bottoming pattern which I am a fan of. Not necessarily an inverse head and shoulders, but something we can work with. Major support now comes in at $9.50. The great thing about this breakout is the gap. Gaps are support. If prices do close below the gap and then takes out $9.50…it would be bad. Very bad. Target to the upside? $12-$12.50. 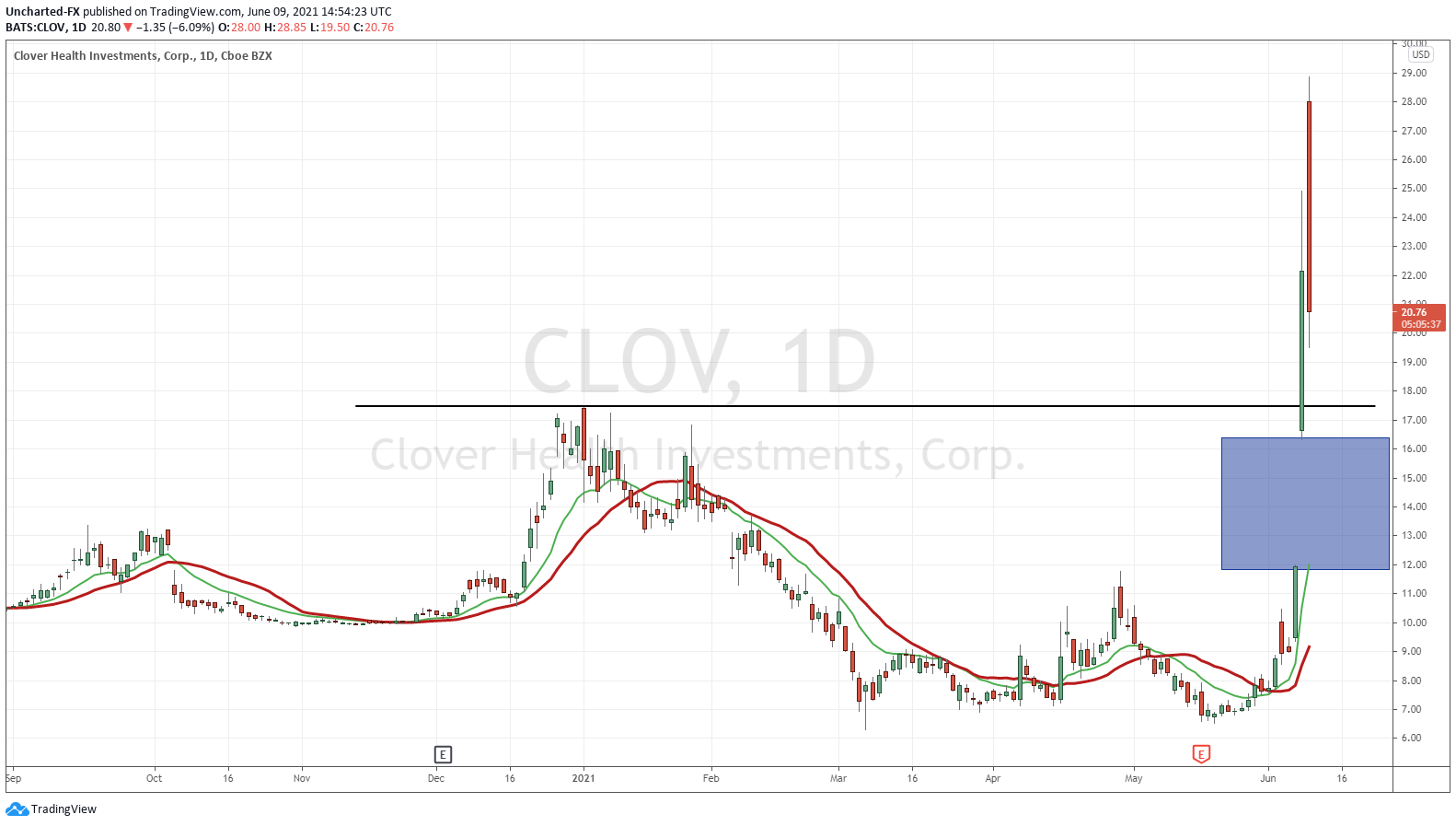 CLOV was a big mover. At one time, the stock was up 100% yesterday, only to close the day up 86%. 700 million shares were traded, when average volume is usually below 10 million. Yes, WallStreetBets is very interested. A lot of posts with CLOV on the title. 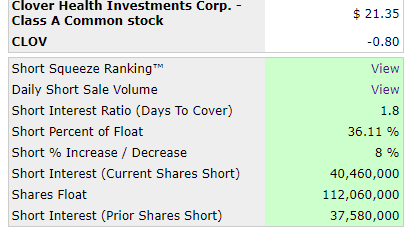 I have to be honest, but I cannot give targets on this one. It’s really crazy. What we can do, is work with support. Which comes in around the $17.00 zone. We are seeing a major sell off right now, will it be enough to take us down back to $17.00? I think on this one, a lot of people are taking their profits.

Look at the gap that I highlighted in blue. Technically, that gap can be support. This is what gaps do. But, if we close below the gap (below $12.00) this stock gets clapped big time. 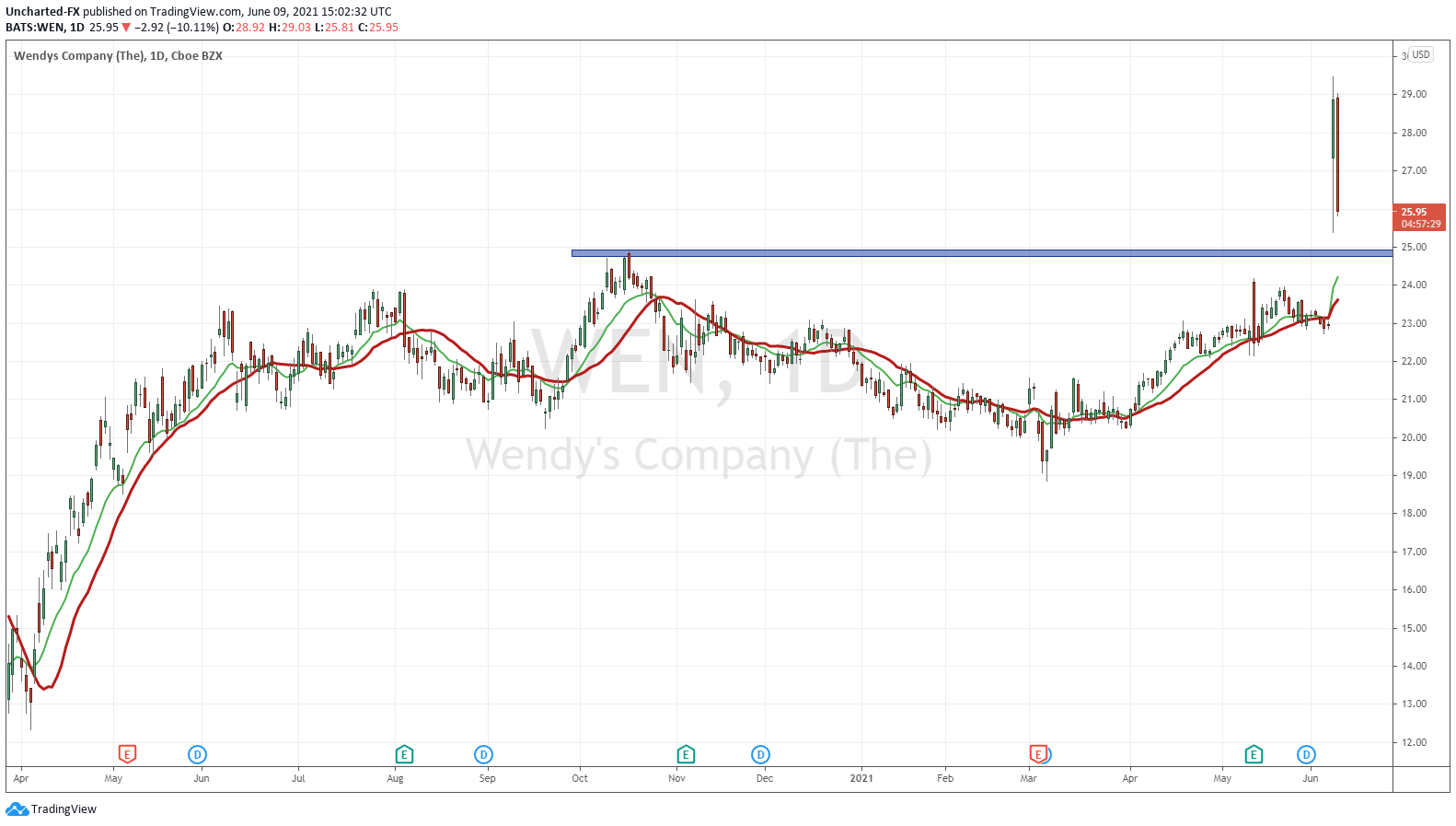 Wendy’s is probably the definition of a silent short squeeze. This came out of left field yesterday. Technically, we broke out into new record highs. The stock is selling off today, pulling back to retest previous highs as support. The support zone we can work with is the $25.00 zone. 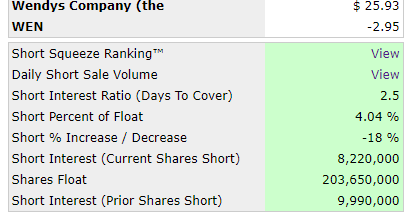 Not really one I would say a further short squeeze is possible. The data doesn’t support it. What makes Wendy’s interesting, is a possible new strategy from the WallStreetBets crowd. Jim Cramer over on CNBC commented on this. Stating:

“I want you to forget the analysts right now. The person in charge of Wendy’s is Reddit user Chillznda,” Cramer said on “Mad Money.” “With that [user] and some other favorable anonymous posts, Wendy’s stock explodes higher.”

Cramer noted that the endorsement was a departure from the headline-grabbing short squeezes that put a spotlight on the group of retail investors, which grew in size during the coronavirus pandemic.

“Now they’re spreading their wings, even into an institutional favorite like Wendy’s with a very low short position,” Cramer said.

So it really isn’t about short squeezes anymore. Just following the crowd, or single users now.

So in summary, the meme stocks still have some legs but keep in mind that more meme traders are taking profits this time around. A new strategy might be deployed, with Wendy’s being the first case study. Retail traders are something we will have to live with. They are not going anywhere. Expect new and creative ways to cause big runs in stocks.

There are a few other meme stocks like WISH and ROOT that I didn’t cover in this article. Clean Energy Fuels is another one. This was mentioned yesterday by Piers here at Equity Guru. Readers had a heads up.

With these meme stock runs, we have seen markets being somewhat broken. Indices and blue chips are not moving as much in anticipation of CPI and Fed stuff. But the meme stocks keep going. If there is a larger overall market sell off, I think the meme stocks will follow…and they could dump even harder.