Inflate or Stock Market Crash? The Fed is Trapped

It has been a wild few months (okay…maybe entire year) in the financial markets. The everything sell off due to the pandemic, the rise of crypto’s and commodities, and recently, the arrival of the retail/meme crowd causing short squeezes in stocks like Gamestop, BlackBerry and AMC Entertainment.

But the most important thing to take away is how monetary policy has impacted all of this. Especially seeing stock markets hit all time record highs. I know that this topic is not sexy nor entertaining for the average market participant, but bear with me. Understanding the predicament we are in, will allow you to guess where money flows will be going. (Hint: higher markets and asset prices are not over just yet.)

Long time readers know I have been mentioning this chasing of yield. This has been exacerbated now, due to all the people who have been laid off during the pandemic. Government checks is another major topic, but we will discuss that some other time. Just know that government spending a lot more money has a role in where interest rates are likely going.

But we know the story of many of these people, who believe they have shattered employment futures and have been staying home. They decided to take these government stimulus checks to open accounts on Robinhood and play the meme stocks and the crypto’s. Stock markets keep making all time highs and they want in on the action. You cannot blame them.

Now we are hearing calls of stocks markets topping, and we will explore this. But first, let’s break down the Fed predicament. 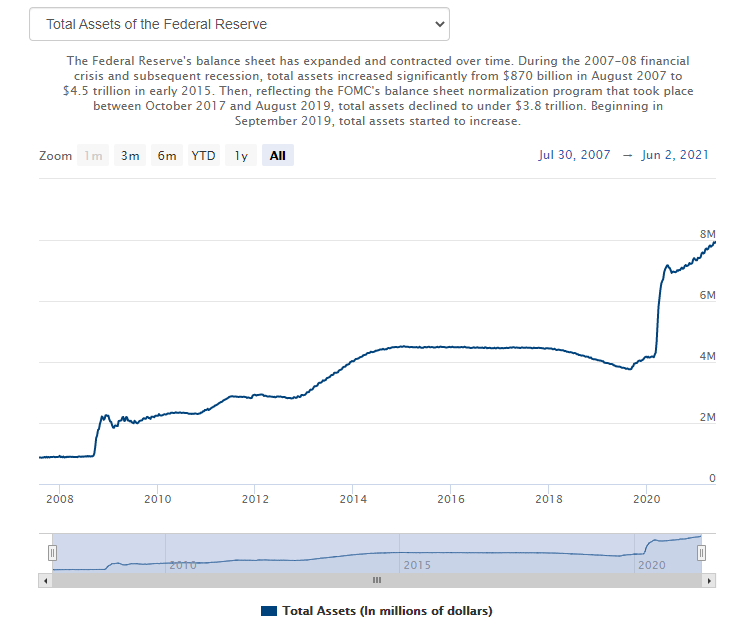 Take a look at that Federal Reserve Balance Sheet

Memes of Fed Chair Jerome Powell and his money printers going brrrrr are going viral. Whenever Stock Markets fall, buying the dip is the pavlovian response as investors and traders expect the Fed to buy it up. They cannot allow markets to fall due to the leverage of some funds, but really due to the pension crisis. Many of the baby boomers who are about to retire in a few years cannot withstand another market crash. In fact a lot of them are paper millionaires with their 401ks and RRSP’s performing well in this environment. 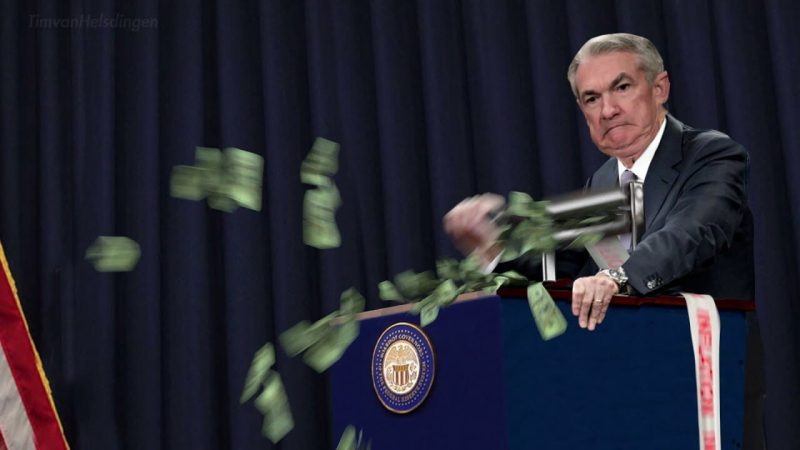 The title of this Market Moment is that the Fed has only two choices: either to inflate, or to cause a market crash. Let’s explore the inflation part first.

Inflation is coming. It is already here. Not to go too academic on you all, but we have a situation where government checks did not go into anything productive. A lot of it went to speculation. There are young people at the golf courses who only talk about stocks. They have no plans to go back to work because they are making more money speculating. What we have is this:

We are in a situation where there are people with more money competing for the same number of goods and services.

Inflation is coming. The missing element is money velocity. This will pick up as soon as the global economy re-opens fully.

Even those that understand the basics of monetary policy know that when inflation rises too quickly, the central bank hikes, or raises interest rates. Inflation data has been picking up but not to worry, the Fed is saying it does not meet their requirement for hiking rates and tapering current policy. The difference is that this inflation is transitory. People are spending money on limited goods, which is causing prices to rise, and once they switch to spending on services, the temporary inflation will disappear. Hence why rising inflation will not cause the Fed to hike rates UNTIL they get consistent data showing the economy is improving and inflation readings are over 2%. 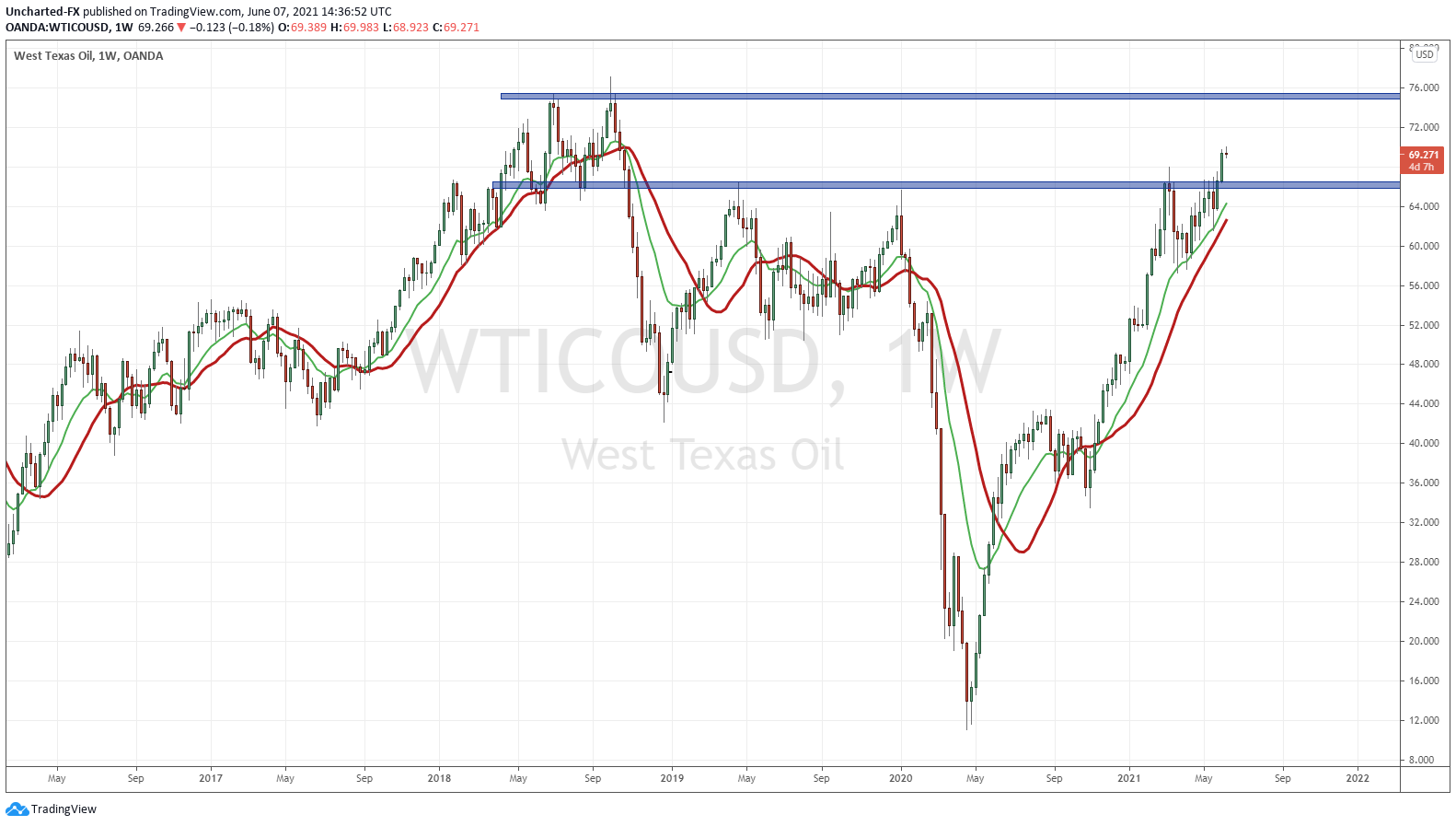 Regular Readers of Market Moment know that the chart above is key to a lot of this. Oil has been on a tear due to the re-opening and increasing travel demand theory. Personally, I think if the Fed wants to mask their monetary policy inflation, they will do so with Oil. Higher Oil prices means higher transportation costs and higher food costs. The Fed can say that inflation is rising due to higher Oil prices. Perhaps some event to prop Oil even higher is what the Fed points to. Mind you we have already seen a cargo ship block the Suez Canal, an Indonesian refinery get hit by lightening, a US pipeline get hacked, issues in the Middle East, and an Iranian refinery go on fire.

BUT HERE IS THE KICKER

Expectations of Fed rate hikes due to this transitory inflation took a hit this past Friday when US employment data missed expectations. Many analysts see this as a sign that the US economy still has ways to go for a full recovery. Hence low interest rates and current monetary policy will remain in place.

Circle this Thursday on your calendars, as it is when US CPI data for the month of May is released. Inflation data which comes out before the Fed Interest Rate Decision next week.

The second case, the Market crash, is pretty self explanatory. If the economy is really improving, and the Fed wants to handle inflation, they raise interest rates. At the same time, ensuring that government costs of servicing their debt increases too… as well as the debts of the consumers. If stock markets are really buoyed on promises of cheap money (brrrr, buy the dip), then we should expect a taper tantrum. Markets will fall, and they could fall hard. This in itself could hit pensions or cause a financial crisis with some bank or fund holding leveraged longs betting that the Fed would not raise rates.

Inflate or Market Crash. I am leaning more towards the inflate side. Remember, this also means that currencies will continue to weaken. Especially the US Dollar. We are in a currency war where all central banks want a weaker currency. This is for inflation purposes (it takes more weaker currency to buy something hence rising prices), and for some nations, to boost exports. If you hold your wealth in these currencies, you are losing purchasing power. Hence why I believe crypto’s and gold and silver are doing well. They are ways to get out of fiat.

I will leave you with some of the technical charts of the major US markets, and a Janet Yellen headline.

The treasury secretary this morning came out stating that higher interest rates would be good for the country. Adds more drama heading into the Fed meeting next week.

Now onto the charts: 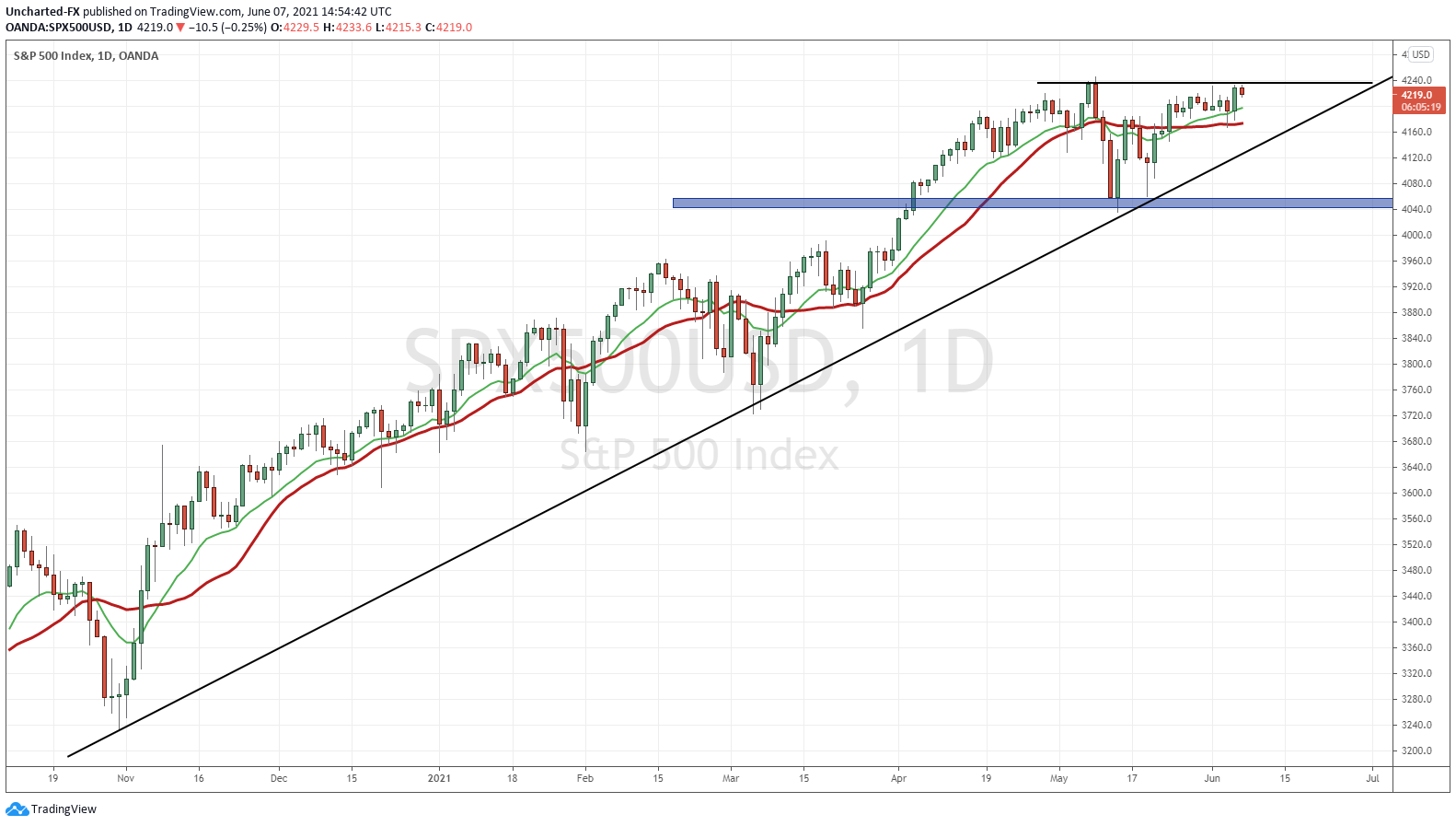 S&P 500 Holding that Longer Uptrend. Close to Breaking Out into All Time Record Highs!

Red day today on the S&P…likely due to that Yellen comment. However, overall the S&P still remains in an uptrend. Last week saw a range until Friday. The most exciting day, and it was because of the US employment (NFP) miss. Traders are now anticipating no signs of tapering by the Fed. Bad news is good news.

Watch for the uptrend to continue. If we do not confirm a close above previous highs, then we can create a double top pattern. Remember, any black swan event could still surprise markets and cause a fall. 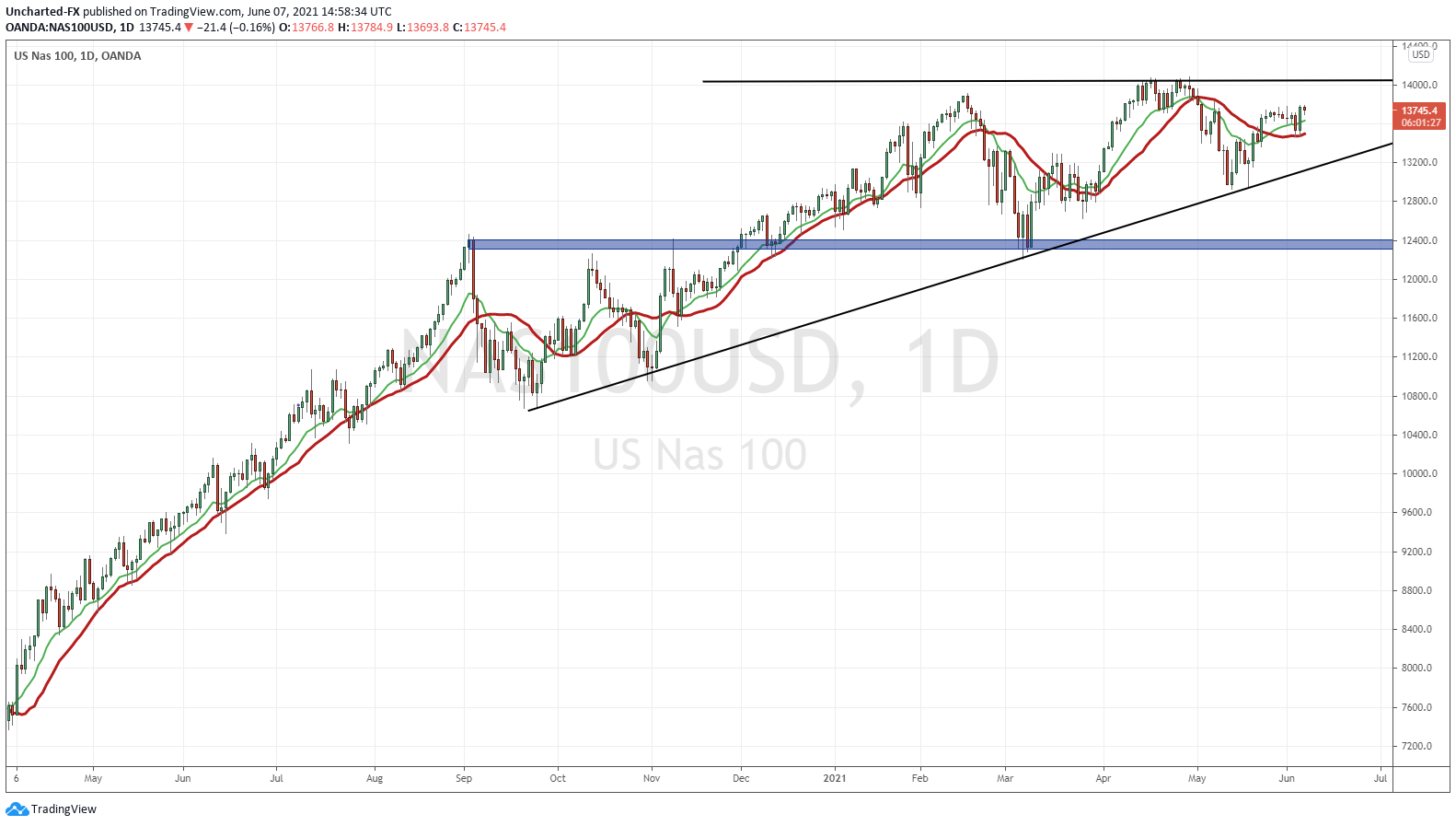 When following the Nasdaq, it really is all about Tesla and Apple, and even what Cathie Wood and ARK hold. Do we see money continue to flow into growth stocks? If we see signs of trouble, does money run out of growth and into value? The Nasdaq is not knocking on the previous high doors like the S&P 500 and the Dow Jones. Maybe it has some catching up to do.

Once again, await the break and close above, or we create a double top on the test of previous highs. 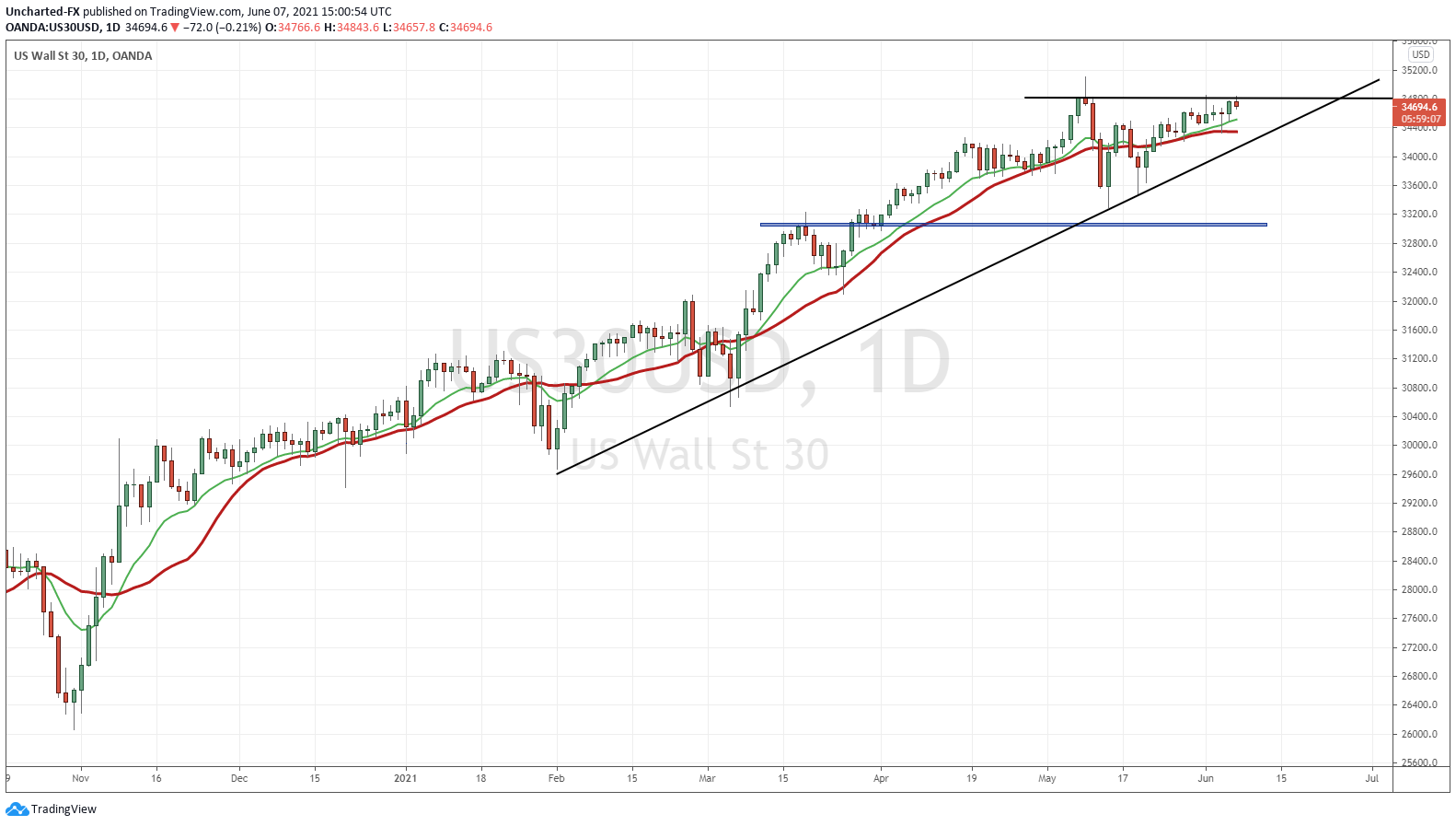 Finally the Dow is almost ready to break out.  I see money running into value due to the dividends. In a way, they are better to hold for dividend yield than most government bonds. Can we consider value stocks as safety? Not really, because they will sell off in an overall market crash. But most of these companies are profitable and will likely be around in the next 10 years and more.

On a final note, watch the Russell 2000 or the US small cap index. I am watching this to follow money flows. To see if indeed, we are seeing retail money leave crypto’s for stocks again. And as I type this up, the Russell is the top performing index for the day.