On May 27, Delic Holdings (DELC.C) announced they have acquired all of the issued and outstanding shares in the capital of Complex Biotech Discovery Ventures (CBDV), completing their acquisition of the company.

Going forward, CBDV will go by Delic Labs and will function as the “engine” for the Delic platform

Going forward, CBDV will go by Delic Labs and will function as the “engine” for the Delic platform, conducting research and developing intellectual property, including psilocybin vaporization. And how is it that Delic Labs will be able to conduct in research in psilocybin? Well, through their Section 56 exemption from Health Canada, which allows them to legally do research on psilocybin. That’s right, DELC now has a legal shroom lab.

“Delic Labs will be an integral pillar of the Delic ecosystem and will produce evidence-based psilocybin and cannabis treatments in innovative product forms, providing great benefits for those suffering from treatable illnesses,” stated Matt Stang, Delic Co-Founder and CEO. “CBDV has a consistently profitable history, more than 50 blue chip clients, and an opportunity for tremendous growth as we commercialize the science. As further legalization of psychedelic treatments progresses, we are well positioned to capitalize on new markets with significant opportunities. We officially welcome the CBDV family into Delic and look forward to their continued success and sharing their discoveries with millions in the near term.”

Founded by award-winning chemist, Dr. Markus Roggen (who is now one of Delic’s directors) and UBC Professor, Glenn Sammis, CBDV has been working on an aggressive plan to build out a suite of novel compounds and delivery methods for the psychedelic industry. They also operate a Cannabis Compound Database includes information about more than 750 compounds found in the cannabis plant and offer advanced analytical testing and extraction optimization for cannabis companies.

Closing the acquisition will also trigger the release of $3,432,356.70, which was raised through a non-brokered private placement that was conditioned upon Delic’s acquisition of CBDV.

Plans for Delic to acquire CBDV were announced in February, and it was announced they were getting CBDV for $7 million worth of DELC stock. Not bad at all for a legal shroom lab and a cannabis extraction, testing, and database operation.

“The Delic platform now allows us to reach much broader psychedelic and medical communities and help ensure cutting-edge treatments become accessible for all. We believe our IP and innovative findings will enable Delic to become the leader in psychedelic wellness discovery and treatment,” stated Dr. Markus Roggen, co-founder and CEO of CBDV. 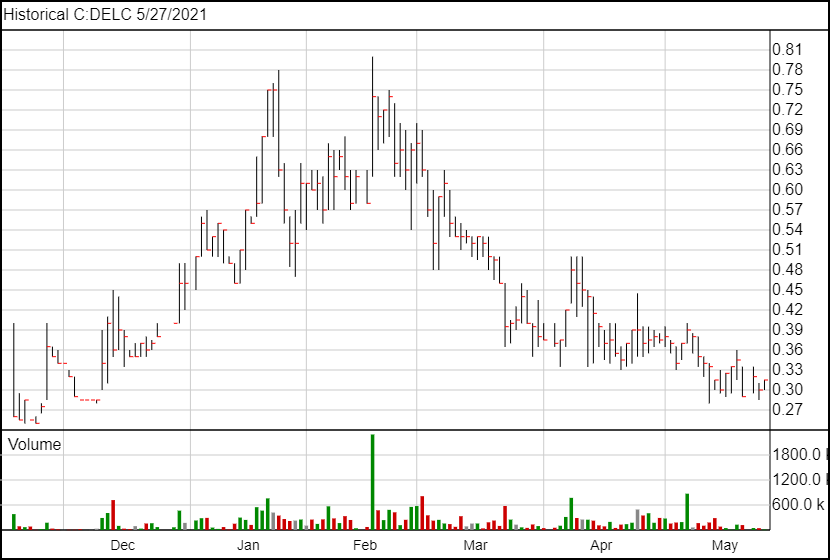 Following today’s news, Delic’s share price is up a cent and a half and is currently trading at $0.315.