My readers and followers are up to date on the ongoing currency war. Central banks are attempting to weaken their currencies in order to boost inflation and exports. The export part is self explanatory and well known, but the inflation aspect involves the classical economics definition of inflation. Inflation is the weakening of a currency where it takes more of the weaker currency to buy something which gives the appearance of prices rising. It really is the currency that is weakening. Now the Bank of Canada is set to make its next move in the global currency war next week Wednesday January 20th 2021.

Just a quick recap: central banks have three ways to weaken their currencies:
1.Rhetoric. This is the most common way central bankers weaken or strengthen a currency. Also why the press conferences are closely monitored by traders. Chairmen (and women) use diction and rhetoric as a way of telling market participants what they are planning on doing in the future. The market reacts and prices this in. The currency moves in the way the central bank wanted.
2. Interest Rate Cuts. This is the next step up using interest rate differentials to either strengthen or weaken the currency.
3. Quantitative Easing. The final and most extreme way to weaken the currency using supply and demand principles.

Most central banks have exhausted 2 and 3. The European Central Bank (EBC) is the one I have been following closely. The ECB is trying to weaken the Euro as the European Union is a heavy export union. The problem has been the US Dollar, the true winner of the currency war so far. Since the US Dollar is the reserve currency, if the US Dollar is dropping, the other currencies are strengthening. This includes the Euro, the Pound, the Loonie, the Aussie Dollar, the Kiwi Dollar, the Yen etc. The ECB increased their emergency asset program up to 1.8 Trillion Euro’s in December. The Euro popped. Now all the ECB has left is to cut rates deeper into the negative. Expect this to happen.

“Money markets see an increased chance of the Bank of Canada cutting interest rates closer to zero, as tightening economic restrictions to contain a second wave of COVID-19 cases offset optimism that activity will rebound later this year.

Interest rates were thought to have hit rock bottom in Canada after they were slashed 150 basis points last March to a record low of 0.25 per cent, a level the Bank of Canada considered the effective lower bound. But in November, Governor Tiff Macklem said a lower floor could allow Canada’s central bank to ease further if the economy weakens.”

Micro cuts have been utilized by other central banks last year.

“Other central banks have moved in small increments. In November, the Reserve Bank of Australia cut its policy rate by 15 basis points to 0.1 per cent, while the Bank of England did the same last March.”

The Bank of England is now expecting to enter negative rates sometime before June of this year. The Reserve Bank of Australia will be next, and I am sure the Bank of Canada, and then eventually the Federal Reserve, will follow.

All to attempt to weaken the currency, and why I have been saying for months that the trade is out of fiat. Hard assets/commodities and cryptocurrencies are the way to play this going forward. In my opinion this is why Bitcoin and other cryptocurrencies have been rising. You can read my thoughts on the next Gold move here.

Let’s take a look at the USDCAD. 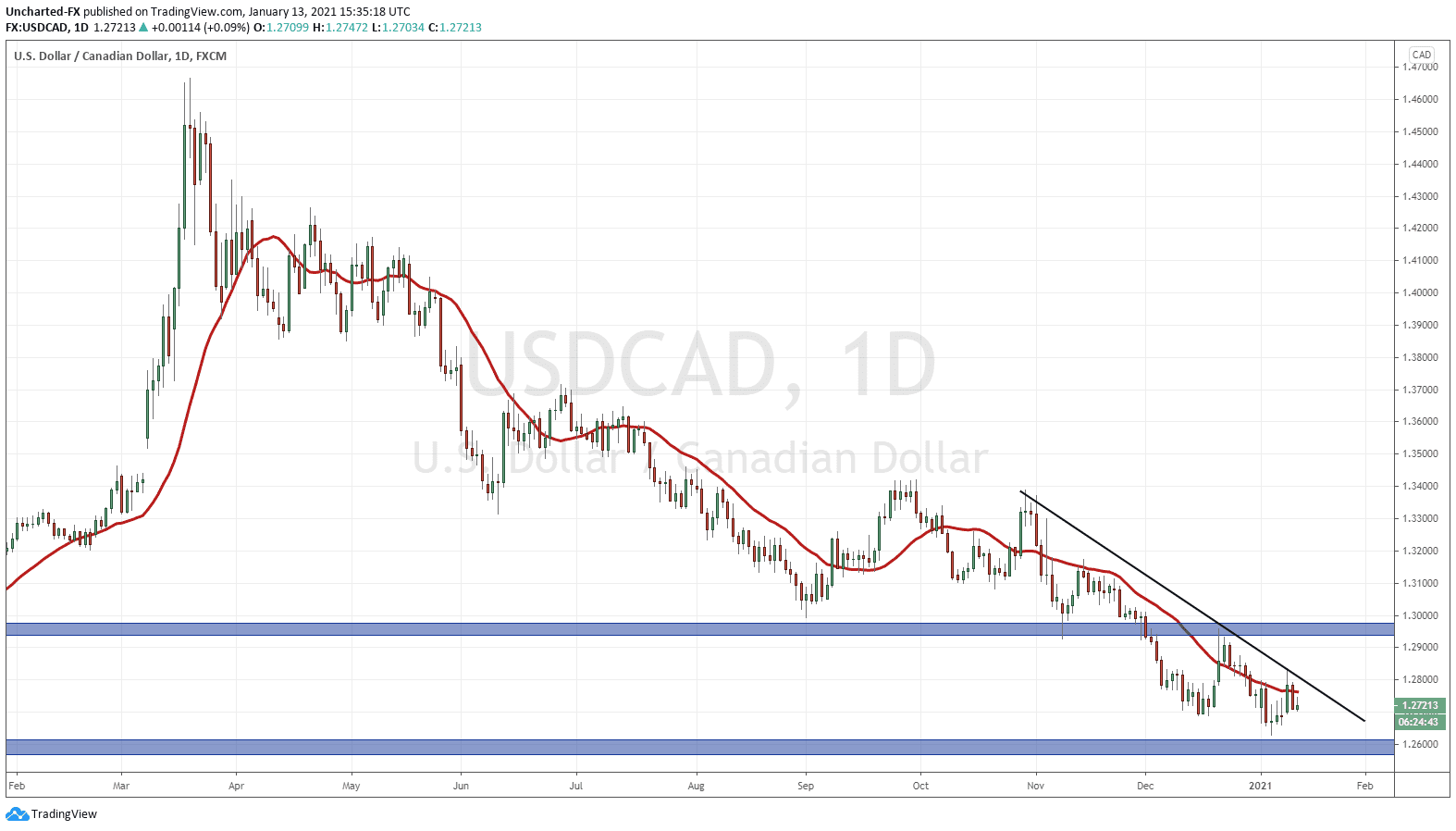 The Loonie has been appreciating against the US Dollar as the Dollar ( DXY ) keeps sliding. The DXY is a chart that I have been following closely, and my readers and followers have seen my previous posts. The DXY is at a MAJOR support zone and a relief rally is highly probable.

Funnily enough, the USDCAD is also at a major support zone around the 1.26 zone. A good spot for a trend reversal. On my chart, I have drawn a trendline which is a popular way to determine when a trend shift occurs. If price closes above the trendline, the Loonie will depreciate against the US Dollar.

However, I am hoping we develop a reversal pattern. Our favorite inverse head and shoulders pattern. What we would require is the right shoulder for a confirmation. For this pattern to play out, we would require a pop up to the 1.30 zone, which is our resistance and neckline, before pulling back and then taking off. 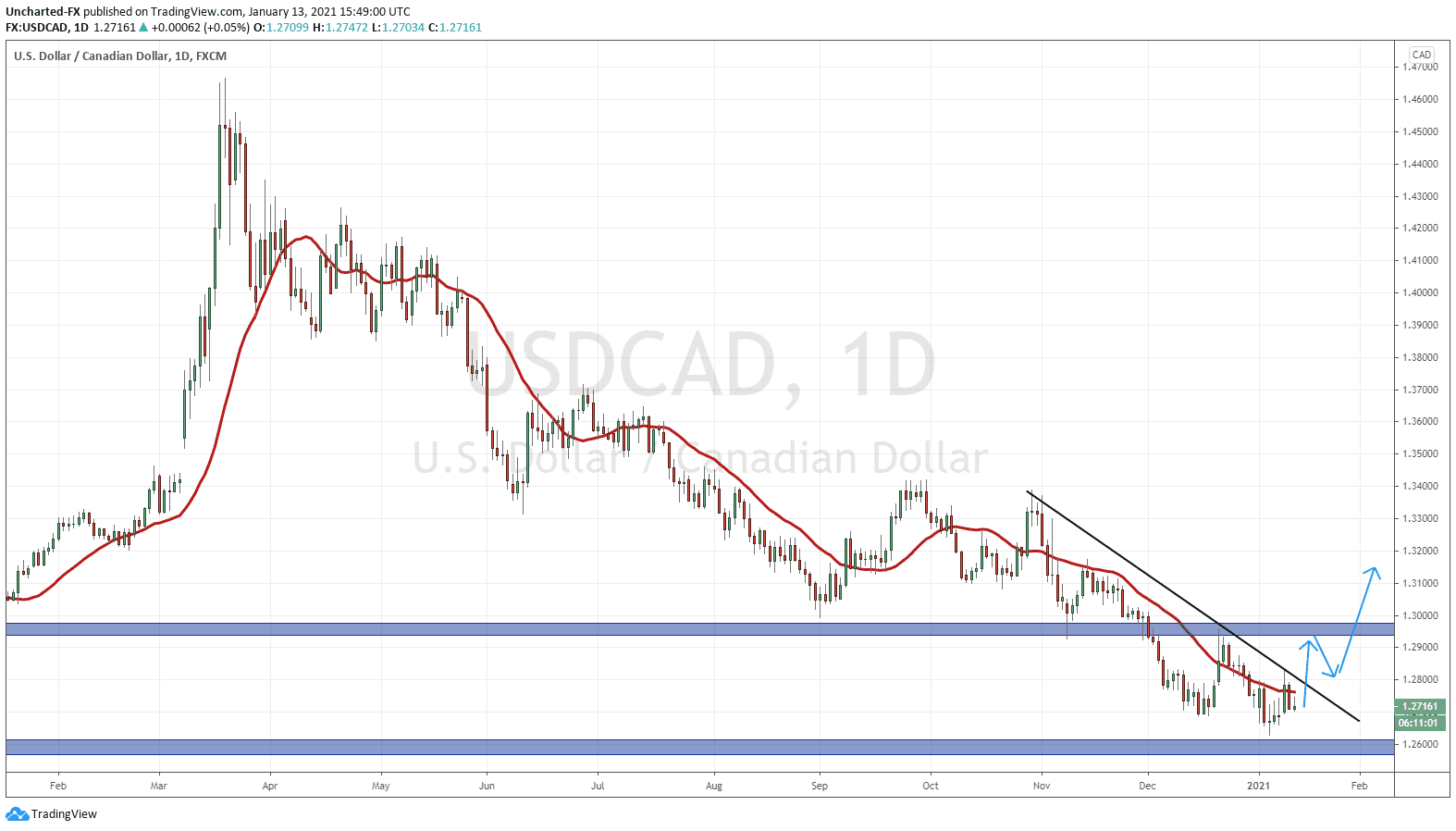 The interest rate cut could be the fundamental catalyst for the reversal pattern, as it is one of the major ways left to attempt to weaken the Loonie against the Dollar. This was expected by us. This is the currency war.