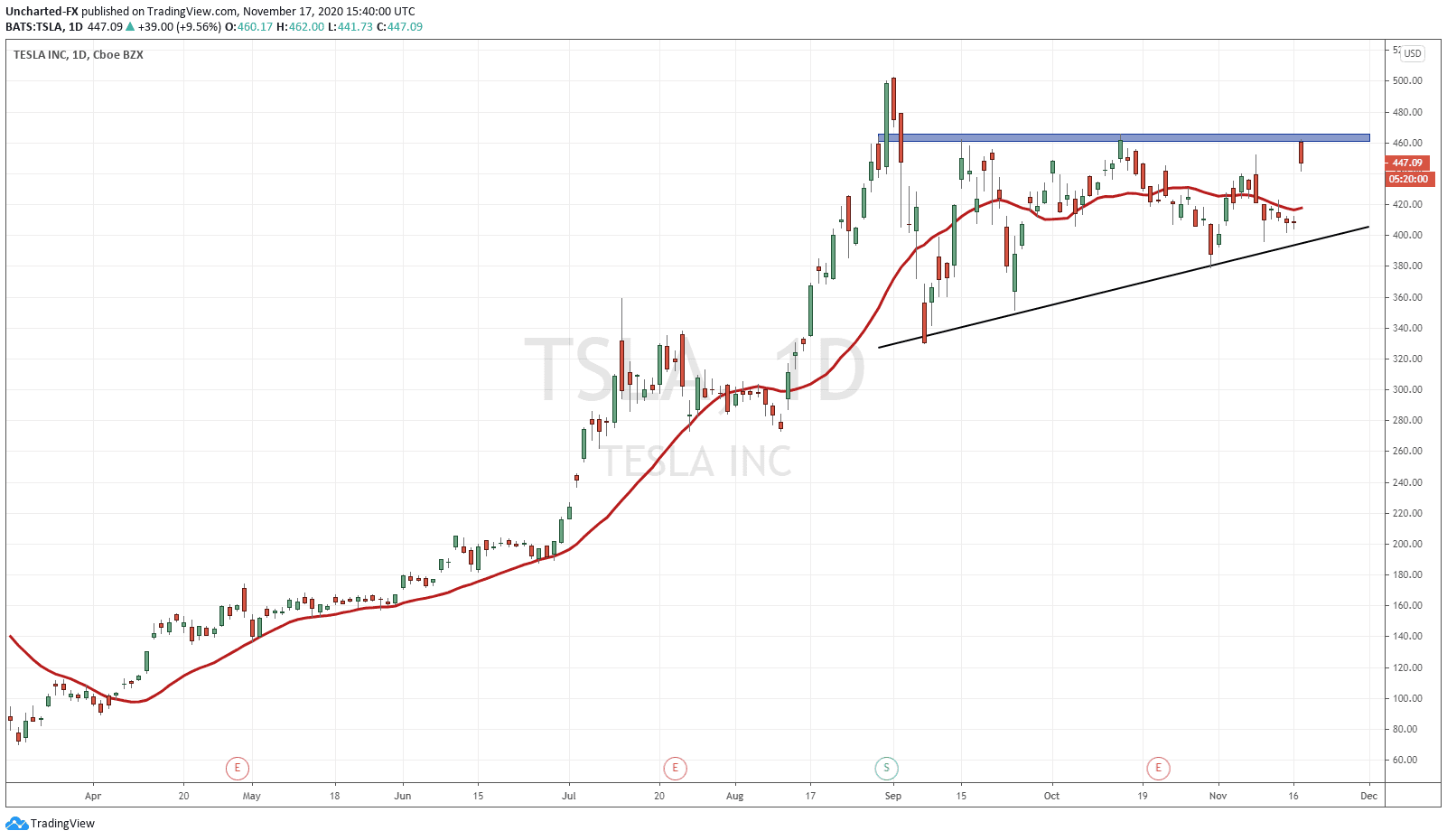 It was an eventful trading day for the markets yesterday, after the headlines came out about a Moderna vaccine with a 94.5% effective rate. What we were looking for was how the daily candle would close. The S&P 500, the Dow and the Russell 2000 printed record closes. On the open today, news regarding October’s retail sales weighed in on the markets. Retail sales came in at 0.3% vs 0.5% expected, and fears of this data deteriorating due to an increase in Covid cases, and declining household income, are increasing the uncertainty. However, I want to remind my readers once again that the real economy and the stock market are two different things. We saw stock markets rise even when we had great depression like employment data before, and this will continue. It is really a matter of stimulus and how much more money will be pumped in.

This retail data did take some people off guard. Personally, I think this is just a normal pullback to retest previous resistance now turned support zones. Many were expecting a nice pop in markets due to news which came out near the close of yesterday’s session. Traders were expecting Elon Musk and Warren Buffett to boost the markets.

We have seen quite the run in Electric Vehicle Stocks. Chinese company NIO comes to mind. The stock is up 1065.42% year to date, and got boosted on the news that Pension Funds (like CalPERS) are taking positions in these companies.

The more spectacular news was Tesla being included into the S&P 500 on December 21st 2020. We all knew this was coming, but it gained a lot of attention due to the divisive opinions of the stock and the company.

The truth is that this is bullish news for Tesla. Being included into the S&P 500 means that ETF’s will need to buy shares of TSLA. And I mean a lot of shares. The company saw its value increase by 40 Billion on the news as shares popped over 12% post market.

The question now is how to handle the transition. There are already talks about whether Tesla should be included all at once, or in two pieces. It will also be one of the index’s most influential constituents with a weighting that falls around those of Berkshire Hathaway Inc., Johnson & Johnson and Procter & Gamble Co.

Chart wise, Tesla gapped up to our resistance zone at 460, but could not break above it. With market weakness, price actually has retraced quite heavily. Tesla stock remains in our triangle/wedge pattern and requires a break and candle close in either direction to determine its next move. It is important to note out that the 500 zone ahead is a highly important psychological number. A close above 500 would be extremely bullish.

The gap is also a bullish sign…unless it gets filled. Gaps are seen as support and resistance depending on how price gaps. In this case, the gap up is bullish, meaning the gap is support. If the gap is filled, meaning price retraces and close back below 413, thereby filling the gap, this would be extremely bearish, and would likely mean a break below our trendline.

Warren Buffett is the man that financial media were imploring to announce he was buying stocks when the markets were falling earlier this year. If Buffett starts buying, it not only impacts the investors on wall street, but also the average Joe on main street. It comes across as a signal that the bottom is in. However, we have seen some of Buffett’s latest picks turn out to be losing trades.

It seems Buffett is a fan of Big Pharma.

Before we get to that, Buffett did some cleaning up. He closed his entire Costco position. And trimmed positions in Wells Fargo, JP Morgan, PNC Financial Services, and M&T Bank. For the Gold bugs… he also trimmed his Barrick Gold position down to 12 million shares from 20.9 million shares.

Berkshire also bought Snowflake, one of the hottest IPO’s of the year, in a private placement. Owning 6.13 million shares valued at $1.48 Billion. This is one of interest since Buffett is a late comer to technology. He is not known for his tech picks besides Apple. This indicates that he is changing his stance, which in it self could be stock market positive.

Berkshire also boosted its stakes in Bank of America, General Motors, and Kroger. Berkshire added 3.7 million shares to its Bank of America position, to last hold 1.03 billion shares, a stake valued at $28.48 billion, the second-largest stock position in the portfolio.

The big story are the 4 new positions initiated, which is probably a way to play the Covid vaccine pop: 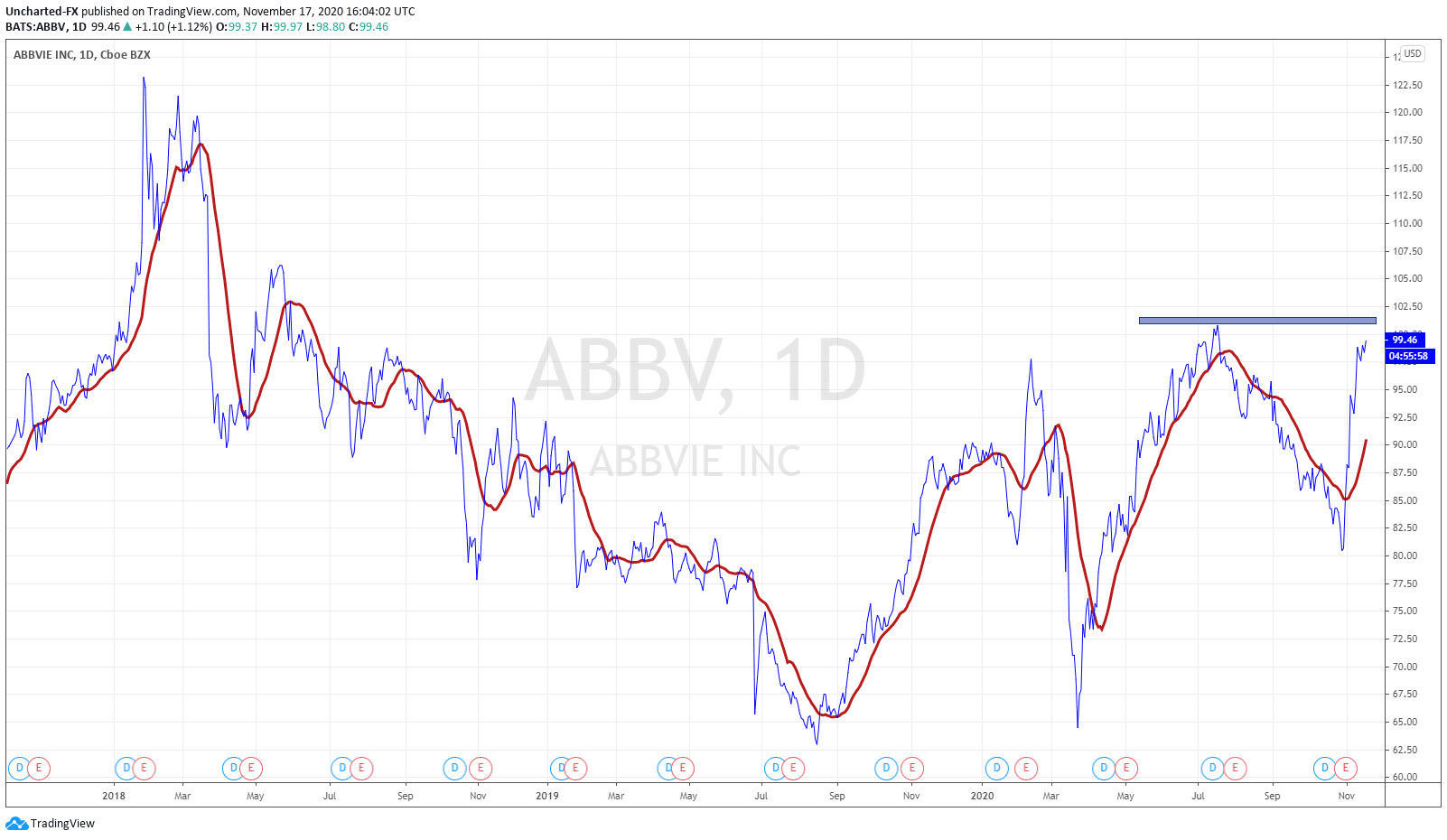 Abbvie (ABBV) is actually one of the more popular value stocks. It has a position in plenty of long term consistent and dividend portfolios with quarterly dividends of $1.18 per share.

The chart is looking prime for a breakout. Resistance is the psychologically important $100 zone. A close above this level, can see a move higher to 112 before hitting all time highs.

So in summary, the market is expecting a Musk and Buffett boost. Tesla joining the S&P is a big story and is bullish for the stock. Warren Buffett buying again is always welcome news, and when the Oracle begins to buy, financial media tells you that you should be buying too.