The US Dollar (DXY) Bounces from 2012 Trendline! Is the Currency War Beginning? 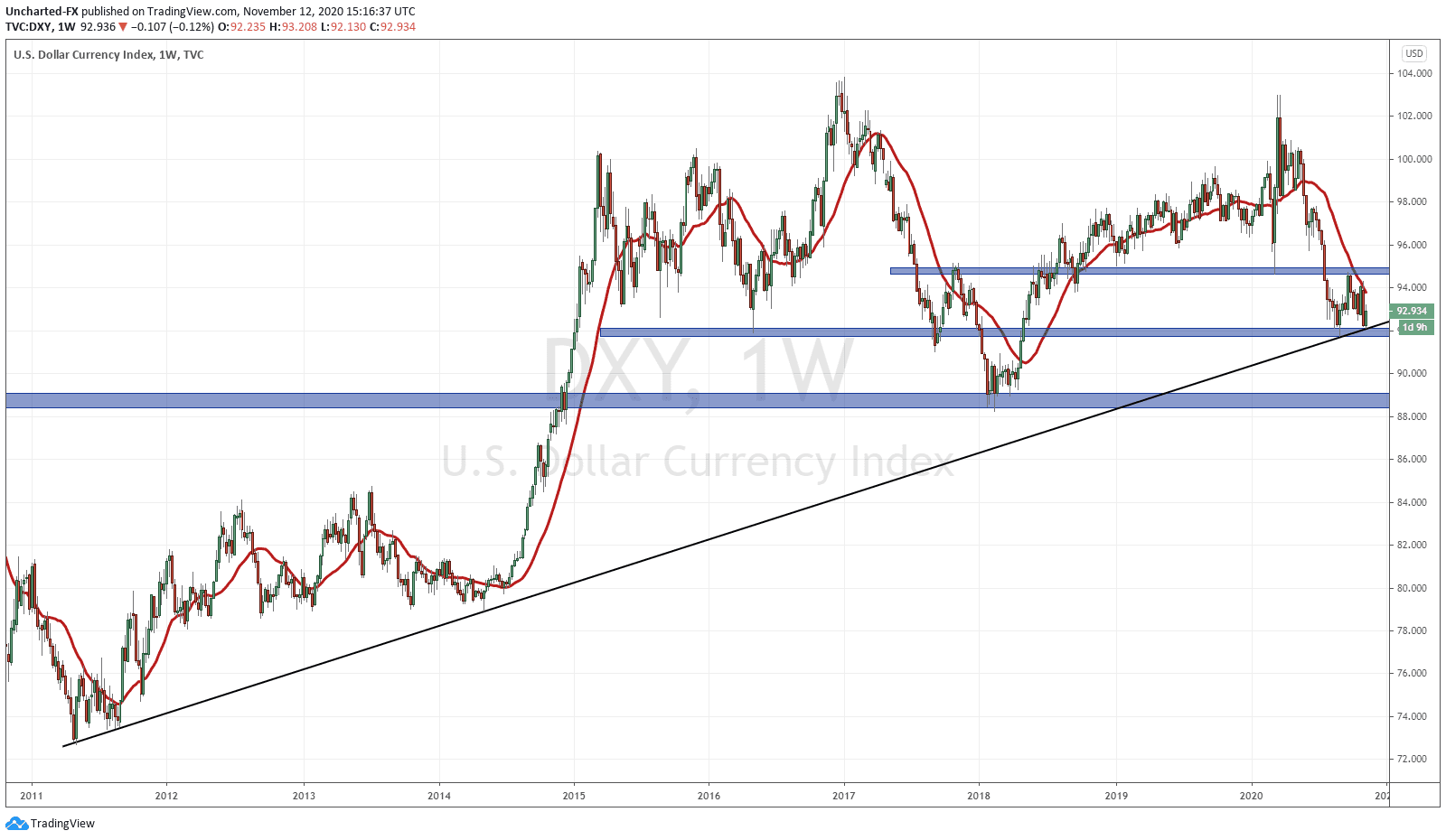 The US Dollar (DXY) is one of the most important charts to watch for anyone playing the markets, or are interested in the macro and geopolitical environment. Being that it is the reserve currency, it deserves your attention.

Last year, I wrote a piece titled, “The Tale of Two Dollars”. I outlined the US Dollar and its role as the reserve currency and what privileges that brings. In the article, I discussed the financial system having another plaza accord 2.0 but on a STRONGER dollar. Going back to that article, you can see there were some great calls predicting what will be happening, and what is currently happening now.

Above is the weekly chart of the US Dollar (DXY).

Notice the trendline going back all the way to 2012. Trendlines are used by traders/investors as a way to gauge whether an asset is in an uptrend or a downtrend. In this case, the Dollar is still in an overall uptrend in the long term. But that could could change.

Last week, price closed right at the trendline, but this area also coincides with support (price floor-highlighted in blue). The Dollar broke below support at 95.00, which took us down to this current support zone at 92. With price hitting both support and a trendline, the Dollar was a bounce candidate. This was mentioned in our Discord Trading Room.

The question is: what does the US Dollar do from here?

Many say the Dollar will weaken due to the money printing. However, because the US Dollar is the reserve currency, it gives them the power to print as much Dollar’s because there is always artificial demand. The French called this exorbitant privilege. So the key here is focusing on the Dollar as that reserve currency.

If you look around the world, many western economies are hurting and have problems. Some may argue Japan is still managing well, and their people have the highest savings rate. These are reasons why many consider the Japanese Yen as the true safe haven currency. The Swiss Franc is up there as well, but the US Dollar has always been the safe haven currency. Many of us who go to study economics and finance at university, and then become money managers are taught this. That you run into the US Dollar whenever there is trouble.

Until confidence in the US Dollar drops, the Dollar will continue to be the reserve currency. But we could be seeing the beginnings of this confidence being tested.

Let us go over the pros and cons of the US Dollar dropping. The last point is the one which will affect us the most, and has been something I have been predicting in “The Tale of Two Dollars”.

And finally, if you are Canadian, European, British, Australian, Chinese etc, the weaker dollar might be great if you are buying things from the US, BUT it is a nightmare for our central banks and governments. Because we live in a floating currency system, a weaker US Dollar means that the Euro, the Pound, the Loonie are strengthening. Now of course this is not always the case, as certain fundamentals and issues can weaken the currency even with a stronger Dollar. Take Brexit and its effects on the Pound for example.

When countries want to boost their economies during a recession they tend to go down the inflation path. That is cutting interest rates to weaken their currency. The hope is that it will boost exports, since it is cheaper to buy the countries goods, and finally, since it will be more expensive to import things, it would force businessmen and capital to create that industry domestically.

In our world, most western nations have close to 0% interest rates, some are even in the negative! Every nation is trying to weaken their currency to boost inflation. It is a race to the bottom, and there is not much more central banks can do except more money printing and cutting rates deeper into the negative! In this type of world, the US Dollar is probably what you want to hold because it still has the best looking economy out of the bunch. And that is saying something given the data coming out. Do not forget about the US corporations and US stock markets! The US still has the best companies, and in order to buy their shares, you will need to buy US Dollars.

Now put yourself in the shoes of the European Central Bank. You want to boost the economy by exporting more products, which certain countries in the EU do a lot of. But here is the problem: 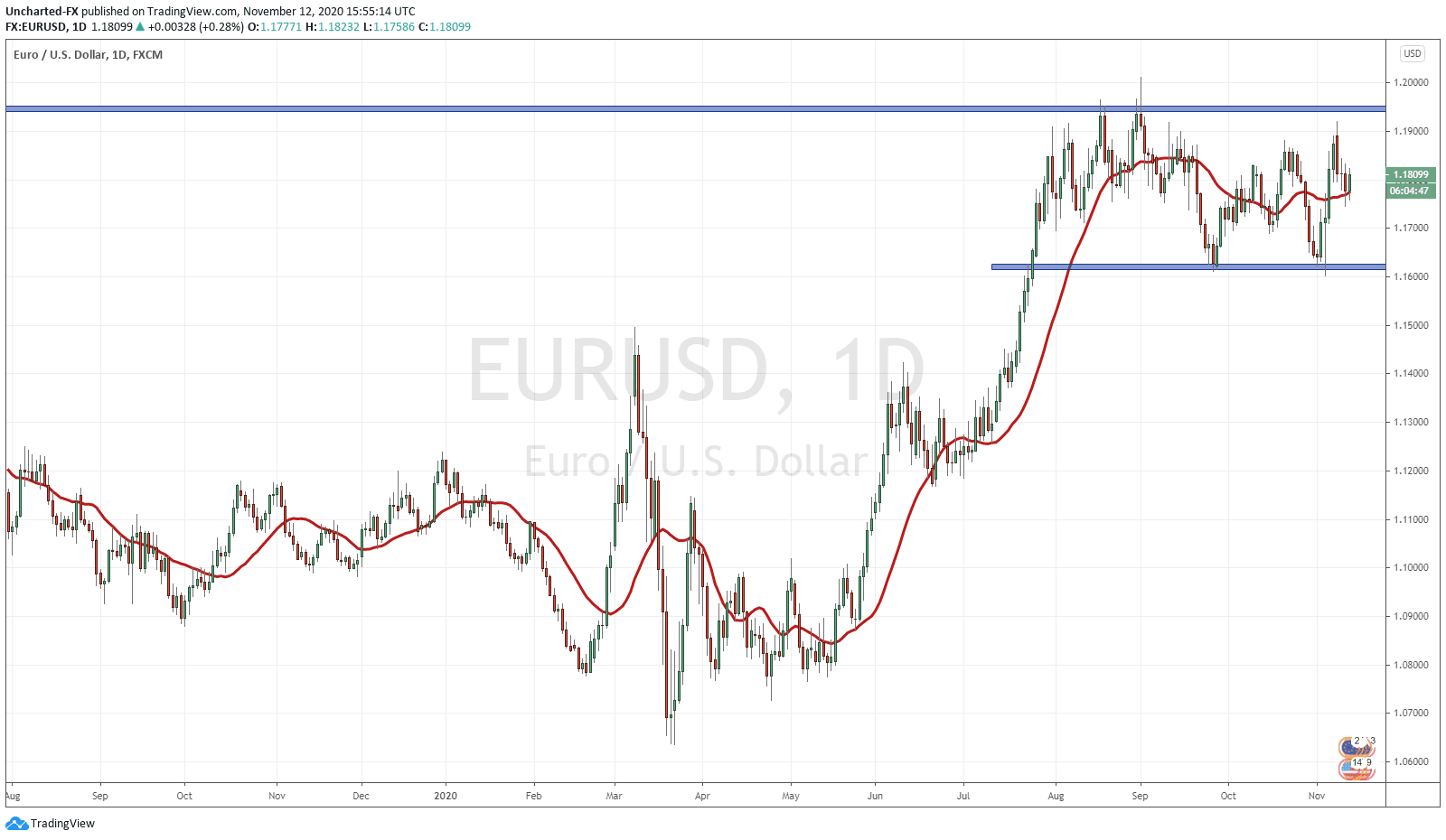 The Euro has been getting stronger against the US Dollar! Christine Lagarde of the ECB has said that they are monitoring the currency, because it is at levels they do not want. Many believe they will take action in December.

This is the currency war. Expect other central banks to follow along. We already have heard that the Bank of England is already considering negative interest rates, and have said they have worked ‘fairly well’ in Europe.

I know many people are watching the stock markets, but I do believe the biggest moves with the biggest impacts will be coming from the debt/credit markets and the currency markets. This is also a major factor, in my humble opinion, that we are seeing people run into Gold, Silver, Bitcoins, and other Non Fiat Alternatives and Hard Assets. People are frontrunning this currency war and central banks literally trying to out do one another as they race to the bottom.